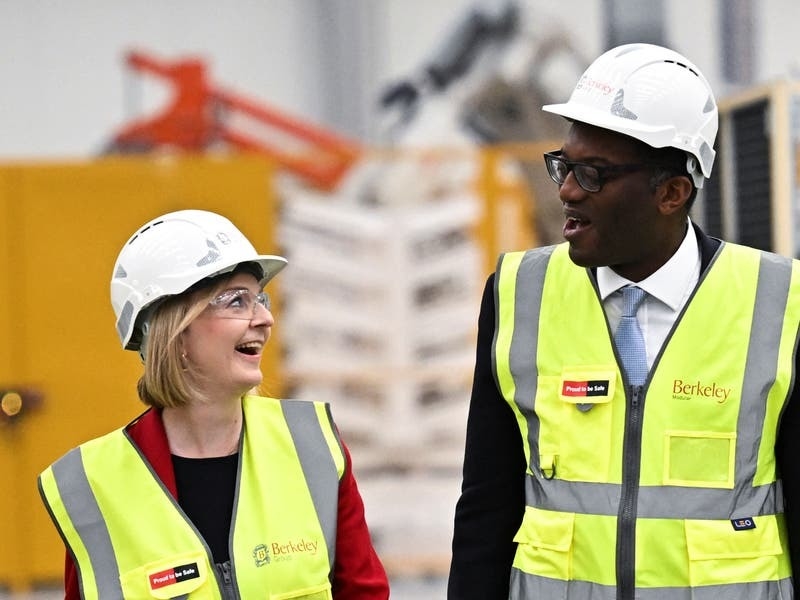 The Prime Minister and the Chancellor will meet with the Office for Budget Responsibility (OBR) later amid market turmoil following last week’s mini-budget.

Treasury and Downing Street sources hit back at suggestions it was an emergency meeting, while Treasury minister Andrew Griffith played down its significance, labelling it a “very good idea”.

Nonetheless, the unusual meeting with OBR chair Richard Hughes will be seen as the latest effort by Liz Truss and Kwasi Kwarteng to reassure markets and voters that the economic turmoil of recent days is under control, after days of chaos in the financial markets and fears of rocketing mortgage bills sparked by the Chancellor’s mini-budget last week.

Mr Griffith told Sky News: “It seems to me a very good idea that the Prime Minister and Chancellor are sitting down with the independent OBR – just like the independent Bank of England, they have got a really important role to play.

“We all want the forecasts to be as quick as they can, but also as a former finance director I also know you want them to have the right level of detail.”

The decision was also welcomed by Conservative MPs and senior party figures, including former chancellor George Osborne who oversaw the creation of the independent spending watchdog in 2010.

Calling the decision to hold a meeting a “welcome move”, he said: “Turns out the credibility of the institution we created 12 years ago to bring honesty to the public finances is more enduring than that of its critics.”

It launched an emergency government bond-buying programme to prevent borrowing costs from spiralling out of control and stave off a “material risk to UK financial stability”.

Chair of the Treasury Select Committee Mel Stride, one of the growing caucus of Conservatives with concerns about the Government’s plans, urged the meeting to be a “reset moment”, echoing earlier calls from fellow Tory MPs for a “plan B” from the Government.

Mr Stride was also among those calling on Mr Kwarteng to bring forward his planned statement setting out how he intends to get the public finances back on track after the OBR said it could produce a preliminary set of forecasts by October 7.

The Chancellor is currently scheduled to deliver his medium-term fiscal plan explaining how he would get debt falling as a percentage of GDP, alongside the updated OBR forecasts, on November 23.

It comes as a YouGov poll for The Times showed Labour opening up a massive 33-point lead over the Conservatives, raising further questions about Ms Truss’ leadership only a few weeks into the job and just days before the Tory party conference in Birmingham.

Sir Charles Walker, one Tory MP commenting on the poll, admitted that his party could be “wiped out” if an election was called tomorrow.

Former Cabinet minister Julian Smith also urged the Government to reverse course on the cut to the top rate of tax, saying it must “take responsibility” for the reaction to Friday’s mini-budget.

Despite the growing unease, both the Prime Minister and Chancellor have said they are still committed to the economic plan, arguing that their £45 billion package of tax cuts is the “right plan” for the economy.

The lack of such a forecast had been one of the issues that reportedly troubled the City after the Chancellor’s announcement.

In a letter to the Scottish National Party’s Westminster leader Ian Blackford and the party’s shadow chancellor Alison Thewliss, Mr Hughes confirmed that the body sent “a draft economic and fiscal forecast to the new Chancellor on September 6, his first day in office”.

He wrote: “We offered, at the time, to update that forecast to take account of subsequent data and to reflect the economic and fiscal impact of any policies the Government announced in time for it to be published alongside the ‘fiscal event’.”

He said that the OBR was not commissioned to produce an updated forecast, but confirmed that it would have been in “a position to do so to a standard that satisfied the legal requirements of the Charter for Budget Responsibility”.

“That forecast wouldn’t have had the growth measures in that plan. They were being finalised in the hours before the Chancellor stood up,” he told Sky News.

Pressed again during an appearance on BBC Breakfast about why the OBR was not given the opportunity to make an assessment of the plan, Mr Griffith there was a “lot of detail” in the document.

“It is for the OBR to ultimately decide how they reflect that in their plans.”

On the back of their favourable polling, Labour meanwhile said the Prime Minister and Chancellor have lost the faith of the markets and the public.

Shadow business secretary Jonathan Reynolds claimed that people and businesses are looking at the “entire approach” of the Government and “saying we have no faith in these institutions”.

“I will be frank,” he said. “I don’t think either the Prime Minister or the Chancellor will ever get that back.”