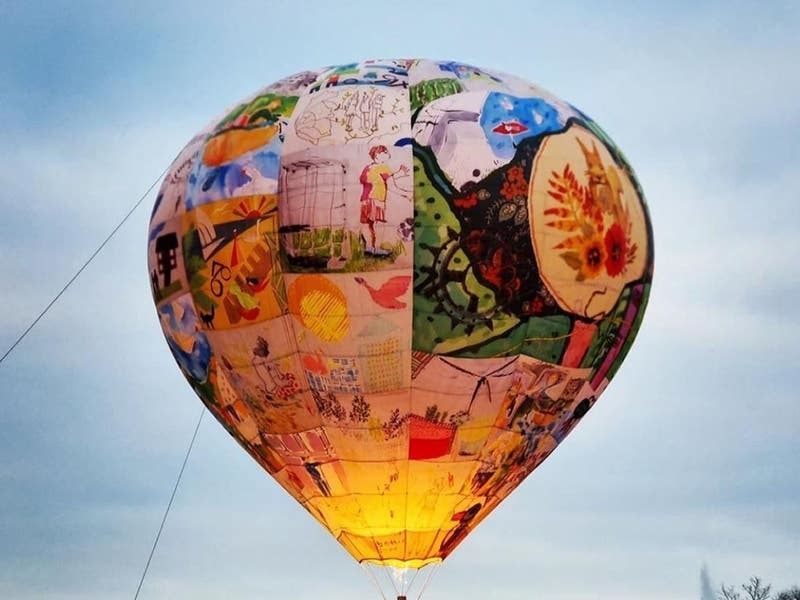 A 25-metre-high hot air balloon will take to the skies this month as a “floating gallery” showcasing 200 designs telling the stories of a local community.

Students of the Royal School of Needlework (RSN) in south-west London took two years to create the hot air balloon artwork made with embroidered panels illustrating stories of members of the community in Thamesmead, south-east London.

The artwork, named Fields Of EveryWhen, was made in collaboration with international artists, Neil Musson and Jono Retallick, who along with the RSN students gathered stories from the community and used them to create 200 designs.

These were digitally enlarged on to 800 metres of fabric to form the balloon, which will fly five times this summer as part of a “performance”.

Mr Musson said: “We have been really impressed by the way in which the students have interpreted personal stories as embroideries, especially given the sensitive nature of some of the content.

The five performances will take place in Thamesmead, with the first on Monday August 15, at Southmere Park, and the last on Sunday September 25, where its final flight will be at Gallions Reach Park.

The BA (Hons) Hand Embroidery is the only degree in hand embroidery in Europe, and is taught at Hampton Court Palace.

Angie Wyman, degree course leader at the RSN, said: “Our degree students were really moved by the stories of the Thamesmead local community and it was extremely interesting to see how they translated them, not only in their designs but also in their chosen embroidery techniques.

“It was wonderful to bring these unique stories to life with the art of hand embroidery and for the person who shared their story to see how it had been interpreted by the student.”