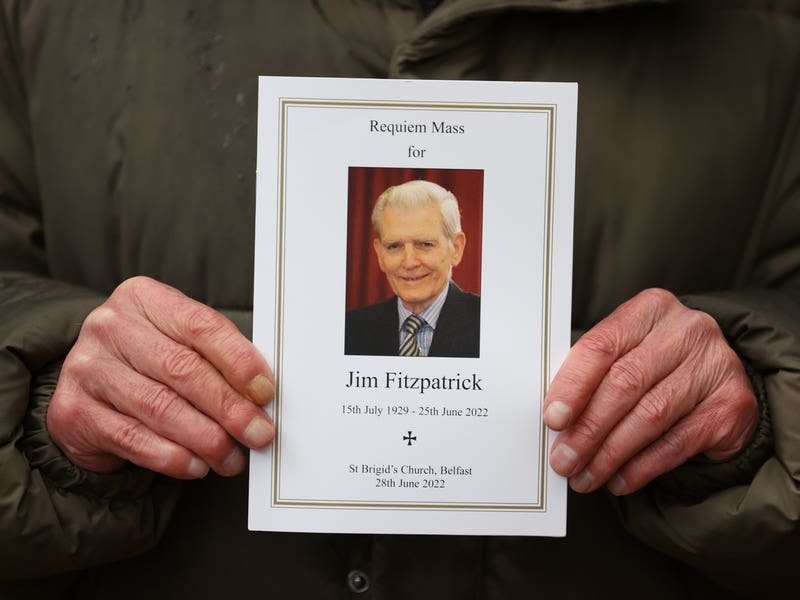 Renowned newspaper owner Jim Fitzpatrick had a life that was long, well lived and filled with many blessings, his funeral has heard.

The proprietor of the Irish News died on Saturday at the age of 92.

Mr Fitzpatrick, a former solicitor who also had significant property interests, played an active role in the Belfast-based paper for more than 50 years, assuming control of the title in the early 1980s.

Politicians and colleagues from Northern Ireland’s media industry were also among the mourners. Taoiseach Micheal Martin was represented by an aide de camp from the Irish Defence Forces.

“Jim’s life was long and well lived and filled with many blessings,” he said.

“Blessings which were never taken for granted. As a result, they were shared generously with many others.”

“Some might say that this was the church’s loss,” said Fr O’Donnell.

“But they would be mistaken because it was in fact the church’s gain.

“The church gained an exemplary lay person who with conviction and consistency witnessed to his Christian faith as a husband and father, as a professional man and as somebody who involved himself deeply in the cultural and civic life of our society, acutely aware of the importance of ecumenical outreach.”

Mr Fitzpatrick’s tenure at the helm of Northern Ireland’s only nationalist daily coincided with some of the worst years of the Troubles.

The father of eight, whose wife Alice died in 2013, was a fixture in the Irish News offices into his 90s, retaining a keen interest in the family-run institution.

Born in 1929, Mr Fitzpatrick’s early childhood was spent in Belfast before his family moved to rural Co Down during the Second World War.

He was educated in a boarding school in Limerick and studied law at university in Galway.

Mr Fitzpatrick began his working life as a solicitor, practising in his father James’s firm in Belfast.

James snr was a director at the Irish News, which was then owned by the McSparran family from Co Antrim.

He inherited his father’s passion for journalism and started becoming more involved in the newspaper trade himself during the turbulent years of the late 1960s.

Soon after he took a journalism course and began to write for the paper.

The 1980s would see him become managing editor and then chairman of the title.

While the ownership arrangements of other local dailies changed several times in the decades since, the Fitzpatrick family’s stewardship of the Irish News remained a constant, as it solidified its reputation as one of the leading outlets on the island of Ireland.

At the weekend, Taoiseach Mr Martin described Mr Fitzpatrick as a “true gentleman”.

“In his decades-long stewardship of the Irish News, he was a profoundly important advocate for an end to violence in the North,” he said.

“His role in the earliest days of the embryonic peace process is not widely known, but it was crucial.”