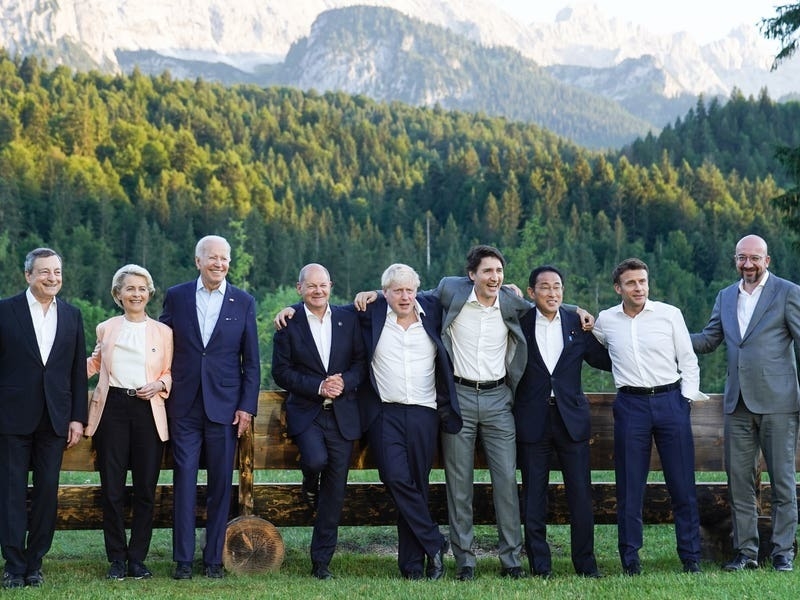 The West needs to help Ukrainians “protect themselves”, Boris Johnson said, as Volodymyr Zelensky urged the G7 group of leading democracies to supply him greater firepower.

The Ukrainian President addressed the leaders of the UK, US, Canada, Japan, France, Germany and Italy by video link from Kyiv as they gathered in the luxury Schloss Elmau resort in the Bavarian Alps.

Mr Johnson, who has warned about “fatigue” around the world putting support for Ukraine in jeopardy as the conflict with Russia drags on, stressed there was unity among the G7 nations.

“I think everybody came to the G7 in Germany, really hearing a lot about Ukraine fatigue, the anxieties of other countries around the world about the continuing war, the effect on food prices, on energy prices,” the Prime Minister said.

There had been concerns that France’s Emmanuel Macron – who has repeatedly held talks with Vladimir Putin and warned that any peace deal must not leave Russia humiliated – had been wavering in support for a protracted conflict.

But Downing Street insisted there was no dispute between the UK and France over the issue, with the two leaders on the same page and their friendly relationship characterised as “le Bromance” by No 10 aides.

He said the military situation was “very difficult” but Kyiv’s forces have demonstrated an “incredible ability to push back”.

“In those circumstances, the G7 supporters of Ukraine around the world have to continue to help the Ukrainians to rebuild their economy to get their grain out, to export their grain, and of course we have to help them to protect themselves.

“And that’s what we’re going to continue to do.”

The impact of the Russian naval blockade of Ukraine’s Black Sea ports has crippled its ability to function as the breadbasket of Europe, with grain at risk of rotting in silos – pushing up global food prices and risking a humanitarian catastrophe in poorer nations.

– The UK pledged £10 million to repair damaged Ukrainian rail infrastructure to create an overland route to get grain out of the country.

– The Government will also put £1.5 million to develop a testing process to identify whether grain sold by Russia on the world market has been illegally taken from Ukraine.

– The leaders were considering putting a price cap on Russian oil to further cripple the economy bankrolling the war effort.

Mr Johnson wants an international solution to get grain out of Ukraine by sea, something which is currently blocked by Russia’s Black Sea fleet and mines deployed by both sides in the conflict.

The Prime Minister has played down the prospect of the Royal Navy being sent in to help merchant vessels beat the Russian blockade.

But he has said British expertise in “remote de-mining” and insurance of commercial shipping in contested waters could help vessels get the grain out by sea.

Mr Zelensky’s address to G7 leaders was delivered in private.

But ahead of his speech, Mr Zelensky said he would demand extra defence systems to combat the missile bombardment suffered by Kyiv and other cities in the days before the summit.

“We need a powerful air defence – modern, fully effective – which can ensure complete protection against these missiles,” he said.

“We talk about this every day with our partners. There are already some agreements. And partners need to move faster if they are really partners, not observers.

“Delays in the transfer of weapons to our state, any restrictions are actually an invitation for Russia to strike again and again.

“The occupiers – these terrorists – must be beaten with all our might so that they do not think they can put pressure and outplay someone.”