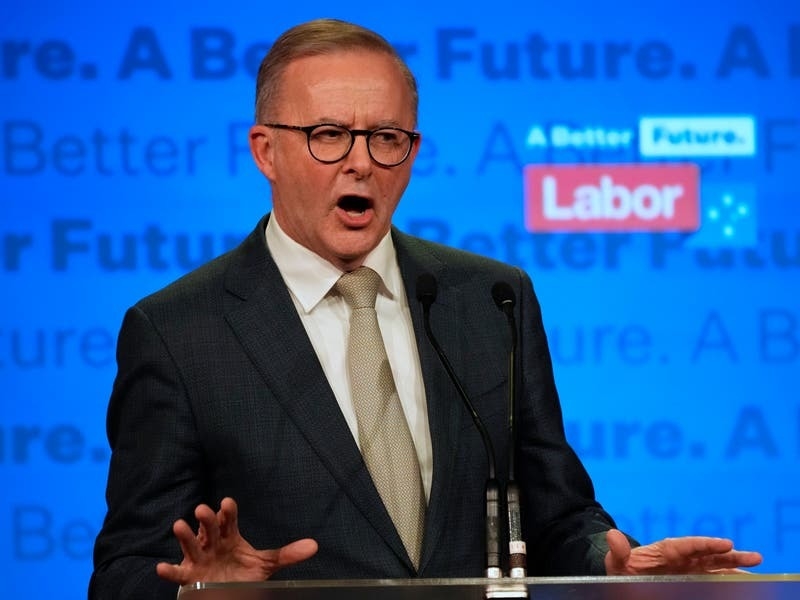 Boris Johnson has congratulated the Australian prime minister-elect, pointing to the UK’s post-Brexit trade agreement with the country and remarking “the only distance between us is geographical”.

“And particularly over the course of this week with the important meetings that are being held, I think it’s vitally important there’s a very clear understanding about the government of this country.”

It also intends to boost minimum wages and tackle climate change with a more ambitious 43% cut in greenhouse gas emissions by 2030 and net zero emissions by 2050.

Mr Johnson said in a statement: “Congratulations to Anthony Albanese on your election as prime minister of Australia.

“Our countries have a long history and a bright future together. As thriving like-minded democracies we work every day to make the world a better, safer, greener and more prosperous place.”

He insisted the “only distance between us is geographical”, pointing to the trade deal struck by the UK and Australia at the end of last year, and the trilateral defence partnership between the two countries and the US, known by its acronym Aukus.

“I look forward to working with Prime Minister Albanese in the weeks, months and years ahead as, together, we tackle shared challenges and demonstrate the importance of our shared values.”

Delivering his election victory speech, Mr Albanese said: “It says a lot about our great country that a son of a single mom who was a disability pensioner, who grew up in public housing down the road in Camperdown, can stand before you tonight as Australia’s prime minister.

“Every parent wants more for the next generation than they had. My mother dreamt of a better life for me.

“And I hope that my journey in life inspires Australians to reach for the stars.”

“As freedom-loving democracies we will continue to work together for a free and open Indo-Pacific, boosting our trade and deepening our security ties through Aukus,” she tweeted.