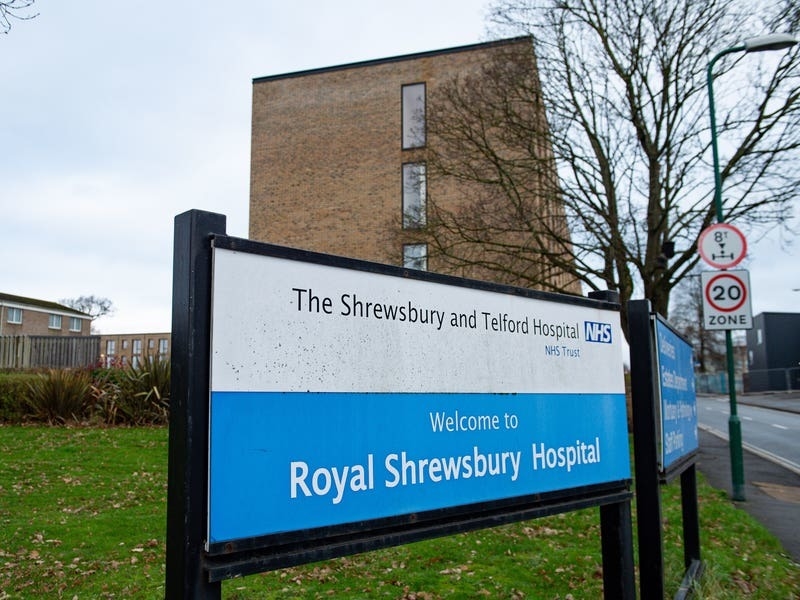 An NHS trust has been fined £1,333,334 after failing to provide safe care to a pensioner and a dialysis patient at one of its hospitals.

Passing sentence on the Shrewsbury and Telford Hospital NHS Trust, Senior District Judge Paul Goldspring said the families of two patients who died at Royal Shrewsbury Hospital in 2019 and 2020 had suffered “unimaginable grief”.

The judge imposed a fine of £800,000 on one of two charges relating to the death of 31-year-old Mohammed Ismael Zaman, and an additional £533,334 over a charge brought in relation to the death of Max Dingle, 83.

The judge said the offences were aggravated by a fine the trust received in 2016 and a “poor health and safety record in the management of” Royal Shrewsbury Hospital.

The trust, which was recently the subject of a highly critical report into the maternity services it offered between 2000 and 2019, admitted the charges through its barrister at Telford Magistrates’ Court on Wednesday.

Another charge was brought against the trust by the Care Quality Commission (CQC) over the death of Mr Dingle, who died in May 2020 after his head became trapped between a bed rail and a mattress.

Opening the facts of the case against the trust, the CQC’s lawyer Ryan Donoghue said the failures in care provided to Mr Zaman “were the legal cause of his death, for which the trust is responsible”.

Mr Donoghue added that Mr Dingle’s “head was trapped between the bed rails and mattress” after he was admitted with chronic lung disease.

An alarm was immediately raised when Mr Dingle was found, the court heard, and he was freed, but he died from a cardiac arrest.

Referring to the death of Mr Dingle, Mr Donoghue said: “The basis (of the guilty plea) is that the failures exposed him to a significant risk of avoidable harm.”

He also paid tribute to the retired policeman, who lived in Newtown in mid-Wales, as a “mountain of a man” who was always the source of great advice.

The pensioner’s son flew back to the UK from his home in Australia to visit his father, but was told he had died before having chance to see him.

The victim impact statement read: “Dad’s death was a total shock to me. I had been told he was responding positively (to treatment).”

Mr Dingle said he been left with a sense of injustice and an image of his father dying an unnatural death “similar to someone in quicksand.”

His statement added: “It seemed that the Trust were trying to whitewash what occurred.

“I do not believe all the circumstances of the death were provided to the pathologist.”

Mr Dingle, who watched the proceedings via a video-link, said the death should have been treated as “potential manslaughter.”

The trust’s barrister Iain Daniels described the deaths as “two tragedies” and offered the trust’s sincere sympathies to the men’s families.

Mr Daniels said the trust acknowledged that training had been inadequate.

He told the court: “We suggest the trust has shown considerable insight into what has gone wrong in these accidents.

Mr Daniels added: “Mr Dingle’s son’s statement has powerfully brought home in court today the effect of failings, whether causative (of death) or not, upon a family and for that again we are deeply sorry.

“It is accepted that the failures were avoidable.”

An independent review of maternity services, chaired by Donna Ockenden and published in March, found “repeated errors in care” at the trust, which led to injury to either mothers or their babies.

Some 201 babies could have – or would have – survived if the trust had provided better care, the report said.

In a further statement issued after the hearing, Phil Dingle said: “It is sad to lose a father at any stage in life, but more so in such tragic and preventable circumstances.

“I thank Fiona Allison from the CQC for progressing the case to a prosecution, and also the hospital team who cared for my father in the last fifteen minutes of his life when he was prevented from resuscitation due to a procedural issue with his case notes.

“With many still unanswered questions, I find it incomprehensible that a hospital Trust is allowed to ‘self police’ a Serious and Unexpected Incident which is highlighted as a known risk by the Health and Safety Executive.”