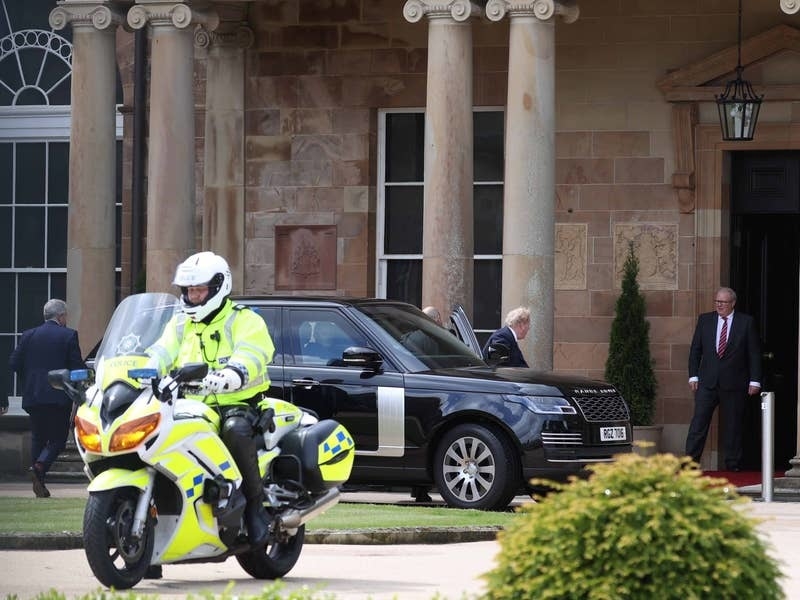 Prime Minister Boris Johnson is meeting the major Stormont parties amid a warning from Ireland against unilateral action to override the Northern Ireland Protocol.

Mr Johnson was booed and jeered by around 200 people who gathered at the gates of Hillsborough Castle as his cavalcade drove in.

Protesters, including campaigners for the Irish language, victims campaigners and anti-Brexit activists, were among the crowds who held aloft banners.

Party president Mary Lou McDonald criticised the “very cynical antics of the Tory Government” as she arrived for the meeting and accused No 10 of “choreography” with the DUP over the latest Stormont crisis.

“People have voted for real change and that’s what people are going to get,” Ms McDonald said as she arrived with her party’s Stormont leader Michelle O’Neill and caretaker finance minister Conor Murphy.

Tensions between London and Brussels are intensifying over the prospect of Mr Johnson using domestic legislation at Westminster to nullify parts of the Brexit Withdrawal Agreement that require checks on goods moving between Great Britain and Northern Ireland.

Foreign Secretary Liz Truss is expected to formally announce a plan to legislate on the protocol on Tuesday, although an actual parliamentary Bill is not expected to be published at that point.

The power-sharing institutions in Belfast have been plunged into crisis in the wake of the recent Assembly election, with the DUP refusing to re-enter a devolved government in protest at trading arrangements the party claims are undermining the union.

The EU has made clear that unilateral action from the UK to walk away from the protocol deal would represent a clear breach of international law.

Mr Coveney, who was in Brussels on Monday, warned that the entire UK-EU Trade and Co-operation Agreement deal – the TCA – could be jeopardised if Mr Johnson takes unilateral action on the protocol.

“If that is the approach taken by the British Government then we can make significant progress and we can make progress quickly to respond to the concerns of both the business community and the unionist community in Northern Ireland.

“That alternative is unilateral action which means tension, rancour, stand-offs, legal challenges and of course calls into question the functioning of the TCA itself, because the TCA and the Withdrawal Agreement are interlinked, they rely on each other.

“That is the last thing Europe needs right now, when we are working so well together in the face of Russian aggression and responding to the support needed for Ukraine at this time.”

Prior to his visit to Northern Ireland, where he will hold talks with the five main parties at Hillsborough Castle, Mr Johnson insisted he did not favour scrapping the protocol, rather amending it to reduce disruption on Irish Sea trade.

Northern Ireland’s 1998 Good Friday/Belfast peace agreement contains provisions to protect and develop relations both on a north/south basis on the island of Ireland and on an east/west basis between the island and Great Britain.

On Monday, a Foreign Office source told the PA news agency that Ms Truss’s priority was about upholding the Good Friday/Belfast agreement and restoring stability.

“We’re not after a fight with the EU,” the source insisted.

In an article in the Belfast Telegraph, Mr Johnson said the UK will have a “necessity to act” if the EU is unwilling to reach a compromise in the deepening row over the protocol.

However, he stressed the Government remained open to “genuine dialogue” with the European Commission.

He said the protocol had been negotiated in “good faith”, adding that “those who want to scrap the protocol, rather than seeking changes, are focusing on the wrong thing”.

The Prime Minister added: “We have been told by the EU that it is impossible to make the changes to the protocol text to actually solve these problems in negotiations because there is no mandate to do so.

“We will always keep the door wide open to genuine dialogue.

“And we will continue to protect the single market, as it has been protected throughout the existence of the protocol so far, and the open border with the Republic of Ireland which will always be of paramount importance.

“There is without question a sensible landing spot in which everyone’s interests are protected.

“Our shared objective must be to the create the broadest possible cross-community support for a reformed protocol in 2024 (when the Assembly will vote on the continuation of the arrangements).

“I hope the EU’s position changes.

“If it does not, there will be a necessity to act.

“The Government has a responsibility to provide assurance that the consumers, citizens and businesses of Northern Ireland are protected in the long term.”

Contention over the protocol will not be the sole focus of Mr Johnson on Monday as he will also use his visit to pledge delivery of three pre-existing commitments: a stalled language and culture package; ensuring women and girls have full access to abortion services; and introducing new measures to deal with the legacy of the past.

The protocol, agreed by the UK and EU to maintain a free-flowing Irish land border, requires customs and regulatory checks on the movement of goods between Great Britain and Northern Ireland.

However, a majority of MLAs in Stormont’s newly elected Assembly represent parties that support retaining the protocol, claiming that it offers Northern Ireland some protection from the negative economic consequences of Brexit.

They point to the unfettered access Northern Ireland traders have to sell into the EU single market as a key benefit of the protocol.

The new Assembly has been unable to convene due to the DUP’s refusal to engage in the institutions until major changes to the protocol are secured.

The Stormont election saw Sinn Fein displace the DUP to become the overall largest party in Northern Ireland for the first time.

The DUP remains the largest unionist party in the region and, under Stormont rules, a new executive cannot be formed unless it agrees to nominate to the post of deputy First Minister.

The DUP has also blocked the nomination of a new Assembly speaker, meaning the legislature at Parliament Buildings cannot meet while the impasse continues.

The party has made clear it needs action rather than words on the protocol from Mr Johnson before a return to power-sharing can be countenanced.

Sinn Fein, which is now entitled to the First Minister’s role, has accused the DUP of holding the people of Northern Ireland to ransom by not allowing Stormont to function in the midst of a cost-of-living crisis.