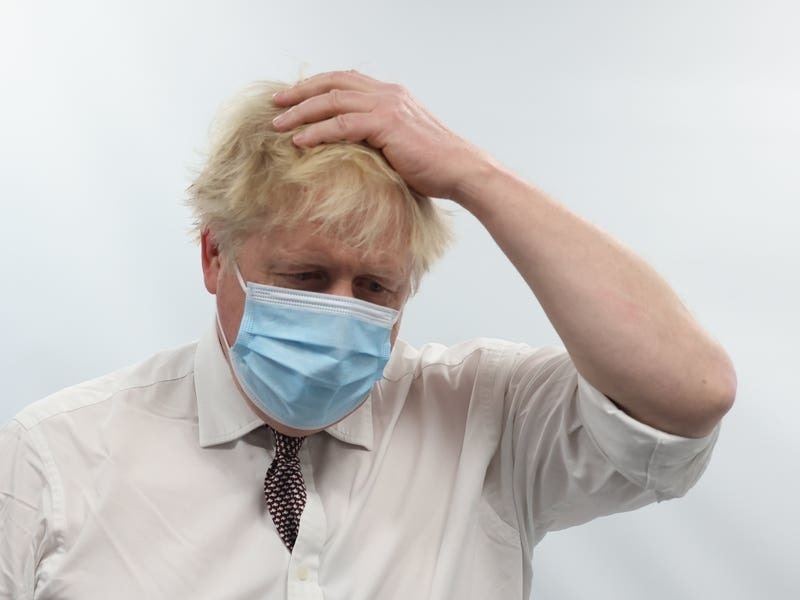 Boris Johnson was facing fresh allegations of breaking coronavirus rules after Downing Street admitted he had a birthday celebration inside No 10 during the first lockdown.

Downing Street conceded staff “gathered briefly” in the Cabinet Room following a meeting after it was alleged 30 people attended and shared cake despite social mixing indoors being banned.

ITV News reported the Prime Minister’s wife, Carrie Johnson, had organised the surprise get-together complete with a chorus of “happy birthday” on the afternoon of June 19 2020.

A Downing Street spokeswoman said: “A group of staff working in No 10 that day gathered briefly in the Cabinet Room after a meeting to wish the Prime Minister a happy birthday. He was there for less than 10 minutes.”

No 10 said: “This is totally untrue. In line with the rules at the time the Prime Minister hosted a small number of family members outside that evening.”

The allegations capped another torrid day for Mr Johnson after Lord Agnew dramatically resigned as a minister at the despatch box over the “schoolboy” handling of fraudulent Covid business loans.

Mr Johnson was earlier forced to launch a Cabinet Office investigation into Tory MP Nusrat Ghani’s allegation that a Government whip linked her “Muslimness” to her sacking as a minister in 2020.

Sir Keir Starmer said the latest revelations were “yet more evidence that we have got a Prime Minister who believes that the rules that he made don’t apply to him”.

“The Prime Minister is a national distraction and he’s got to go,” the Labour leader added.

“Lulu was not invited to any birthday celebrations for the Prime Minister as a guest,” the spokeswoman said.

“Lulu entered the Cabinet Room briefly as requested, while waiting to speak with the Prime Minister.”

Chancellor Rishi Sunak was understood to have briefly attended as the gathering was breaking up as he entered the room to attend a Covid strategy meeting.

Sue Gray was understood to have already been aware of the birthday party allegations and therefore their emergence will not further delay the publication of her inquiry, which is still expected this week.

The senior civil servant has been investigating a series of claims of rule-breaking parties in No 10 as Mr Johnson faces calls to resign as Prime Minister, including from some of his own Conservative MPs.

Earlier on June 19 2020, Mr Johnson visited a school in Hertfordshire where pupils sang him happy birthday as he posed socially distanced with them.

ITV News reported that picnic food from M&S was eaten during the afternoon gathering starting just after 2pm and lasting for up to 30 minutes, while Mrs Johnson and Ms Lytle presented the PM with a cake.

Social gatherings indoors were forbidden under lockdown laws at the time, with a relaxation of the regulations permitting gatherings of up to six people to take place outside.

Jo Goodman, the co-founder of Covid-19 Bereaved Families for Justice campaign, said: “It’s completely sickening that the Prime Minister spent the evening sharing cake with 30 friends indoors and though we’re not even surprised any more, it still brings fresh pain.

“Whilst dozens sang happy birthday to him, families couldn’t even sing in memory at their loved ones funerals.”

Culture Secretary Nadine Dorries, a staunch ally of Mr Johnson, questioned whether the gathering would have broken the rules in place at the time.

“So, when people in an office buy a cake in the middle of the afternoon for someone else they are working in the office with and stop for ten minutes to sing happy birthday and then go back to their desks, this is now called a party?” she tweeted.

Environment Secretary George Eustice told reporters: “What really happened here is a small group of staff who had been working closely with the Prime Minister brought in a birthday cake at the end of the day and there was 10 minutes there around sharing a piece of cake.

“I don’t think that really constitutes a party in the way some of the more serious allegations that are being investigated maybe do.”

But human rights lawyer Adam Wagner, an expert on Covid regulations, said he “can’t see how it could have been lawful” if the reporting was accurate.

“It’s obviously not within the rules and nobody from the Government at the time would have said for a moment it was,” he said.