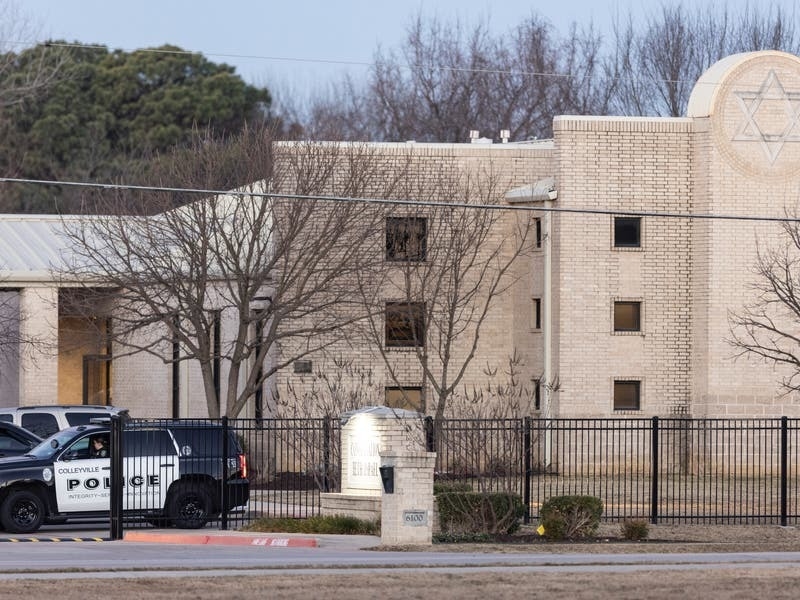 UK counter-terrorism officers are working with authorities in the US after a British hostage-taker was shot dead after an hours-long stand-off at a synagogue.

The man has been identified as 44-year-old Malik Faisal Akram, orginally from Blackburn in Lancashire.

He was killed in a “shooting incident” after the FBI entered the building at Congregation Beth Israel in Colleyville, Texas, on Saturday.

All four hostages were unharmed in the incident which President Joe Biden described as “an act of terror”.

On Sunday, the Foreign Office confirmed he was British and the Metropolitan Police said counter-terror officers were in contact with US authorities and colleagues from the FBI.

Mr Biden said, in an update to the press, that he did not have all the details but it was believed Akram had “got the weapons on the street”, adding: “He purchased them when he landed.”

He said there were “no bombs that we know of”, and that Akram is thought to have “spent the first night in a homeless shelter”.

Akram’s family said they are “absolutely devastated” and “do not condone any of his actions”, according to a statement shared on the Blackburn Muslim Community Facebook page.

The statement, attributed to Akram’s brother Gulbar, said the hostage-taker “was suffering from mental health issues”.

It added: “We would also like to add that any attack on any human being be it a Jew, Christian or Muslim etc is wrong and should always be condemned.

“It is absolutely inexcusable for a Muslim to attack a Jew or for any Jew to attack a Muslim, Christian, Hindu vice versa.”

Foreign Secretary Liz Truss condemned the “act of terrorism and anti-semitism”, while the British Ambassador to the United States Karen Pierce said British authorities are providing “full support to Texas and US law enforcement agencies”.

Akram is said to have demanded the release of a Pakistani neuroscientist who was convicted of trying to kill US army officers in Afghanistan.

Speaking to reporters after the incident, FBI special agent in charge Matt DeSarno said they believed the man was “singularly focused on one issue and it was not specifically related to the Jewish community”, and added they will continue to “work to find motive”.

Confirming that the hostage-taker had died, he said there would be “an independent investigation of the shooting incident”.

He said the FBI had been in contact with their legal attache offices in London and Israel for an investigation with “global reach”.

A spokesman for the Foreign, Commonwealth and Development Office said: “We are aware of the death of a British man in Texas and are in contact with the local authorities.”

The Metropolitan Police confirmed officers from counter-terrorism policing are “liaising with US authorities and colleagues from the FBI” regarding the incident.

In a statement issued by Greater Manchester Police, Assistant Chief Constable Dominic Scally for Counter Terror Policing North West confirmed the suspect in the incident was Akram, originally from Blackburn.

He said: “Police forces in the region will continue to liaise with their local communities, including the Jewish community, and will put in place any necessary measures to provide reassurance to them.”

Ms Truss tweeted: “My thoughts are with the Jewish community and all those affected by the appalling act in Texas. We condemn this act of terrorism and anti-semitism.

“We stand with US in defending the rights and freedoms of our citizens against those who spread hate.”

Ms Pierce said: “The UK & US stand shoulder to shoulder in defiance of terrorism and in defence of the fundamental rights and freedoms of our citizens.”

Earlier, US law enforcement officials said the man had demanded the release of Aafia Siddiqui, a Pakistani neuroscientist suspected of having ties to al Qaida, who is in prison in Texas.

The officials revealed that he said he wanted to be able to speak to her.

While a number of people were reported to have heard the hostage-taker refer to Siddiqui as his “sister” on the livestream, her brother is said not to have been involved.

John Floyd, board chairman for the Houston chapter of the Council on American-Islamic Relations and long-time legal counsel for Siddiqui’s brother, said his client was not the person responsible for the “heinous” incident.

Mr Floyd condemned what had happened as “wicked”, and said the person involved “has nothing to do with Dr Aafia, her family, or the global campaign to get justice for Dr Aafia”.