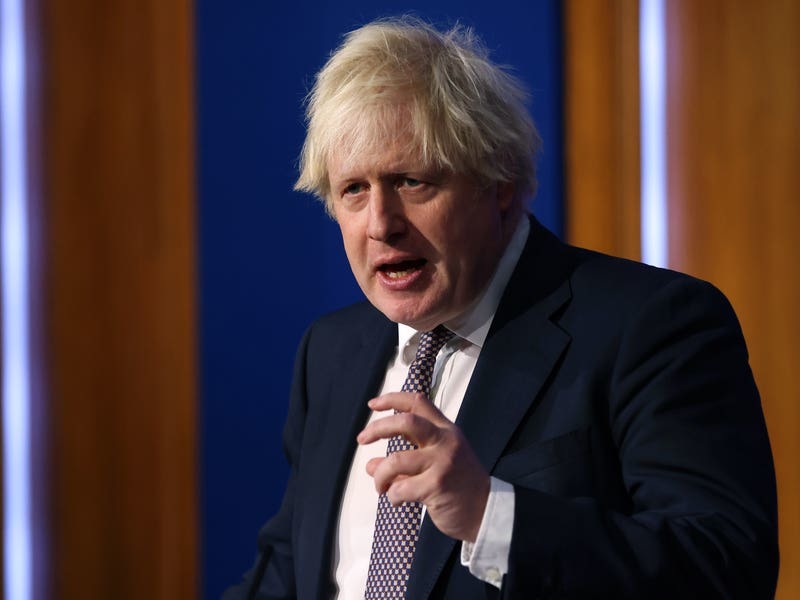 Boris Johnson has ordered the return of mandatory mask-wearing in shops and on public transport, and for contacts of Omicron cases to self-isolate, even if they are vaccinated, after the concerning variant was detected in Britain.

All international arrivals will have to take a PCR test by the end of their second day in the UK, as the Prime Minister prepared to reimpose measures to control the spread of coronavirus over fears the new strain could evade existing vaccines.

The Prime Minister said the “temporary and precautionary” measures will be reviewed in three weeks, while the Government’s vaccine experts will be tasked with considering whether to extend booster jabs to all over-18s.

Mr Johnson announced the strengthening of England’s rules at a Downing Street press conference, after two cases of Omicron were identified, in Nottingham and Brentwood, Essex, with both linked to travel to southern Africa.

He said the strain, designated a variant of concern by the World Health Organisation, appears to spread “very rapidly”, can transmit between the double-vaccinated and may partially reduce the protection of existing vaccines.

Downing Street said compulsory mask-wearing will return in England’s shops and on public transport in the coming week, falling back into line with Scotland, Wales and Northern Ireland, but will not be required in pubs and restaurants.

To slow the “seeding” of the virus in the UK, Mr Johnson said anyone who enters the UK must take a PCR test by the end of the second day of their arrival and self-isolate until they receive a negative result.

Scotland, Wales and Northern Ireland said they intend to mirror the border restrictions.

The individuals and their households were ordered into self-isolation and targeted testing is being carried out in areas where they are thought to have been infectious.

To further slow the arrival of cases, ministers said Malawi, Mozambique, Zambia and Angola will face travel restrictions from Sunday, when they will join South Africa and five other neighbouring nations on UK red lists.

The Prime Minister said he is “confident” this Christmas “will be considerably better than the last”, which was largely cancelled for millions of people, but he refused to say whether further restrictions could be imposed.

Wary that many on the Conservative backbenches will be angered by the move, Mr Johnson said: “I very much hope that we will find that we continue to be in a strong position and we can lift these measures again, but right now this is the responsible course of action to slow down the seeding and the spread of this new variant and to maximise our defences so that we protect the gains we’ve worked for so hard.”

MPs are expected to be given a vote to approve the measures after they come into force, during which a number of backbench Tories may stage a rebellion. But it is thought unlikely Labour would oppose the restrictions, virtually guaranteeing that they will pass.

While the effectiveness of vaccines against Omicron is currently unclear, the Prime Minister said there are “good reasons for believing they will provide at least some measure of protection”.

Mr Johnson stopped short of bringing back the work-from-home guidance or extending the use of vaccine passports.

He said the UK had “absolutely made the right decision in the summer” to open up as it came with “much less risk” and credited the booster rollout as being the reason for the country’s “stable” situation.

Mr Javid told the newspaper: “For the next few years, if the world can get regular vaccines like we get the flu vaccine every winter that deals with multiple strains, then I think we will live completely normal lives again and there is every reason to look forward to that.

“There is every reason to think that we’ll be able to have normal lives and not have to worry about travel restrictions and things like that.”

England’s chief medical officer, Professor Chris Whitty, told the press conference on Saturday that the Joint Committee on Vaccination and Immunisation (JCVI) will be tasked with looking at whether boosters can be extended from the over-40s to the over-18s.

They will also consider whether second doses should be offered to 12 to 15-year-olds, and whether the waiting time before a booster jab could be reduced.

Chief scientific adviser Sir Patrick Vallance said the country needs to “face up” to the possibility the variant will be a “major issue” if it turns out to be highly-transmissible and evades immunity.

He said that the existing booster programme is the current priority, but that vaccine manufacturers believe they can tweak their existing jabs to better counter Omicron “in about 100 days”.

The UK, Germany and Italy all confirmed the presence of Omicron on Saturday, after the variant first detected in South Africa was reported to be in Belgium a day earlier.

The newly-announced measures were described as “Plan B lite” by Professor Lawrence Young, who said it was a “shame” the Government did not go so far as to advise people to work from home and use vaccine passports.

The professor of molecular oncology at the University of Warwick told Times Radio: “What we heard yesterday, and what’s likely to happen over the next few weeks, is a watered-down version of Plan B and the hope is that that will be sufficient so we don’t end up in a really difficult situation at Christmas.”