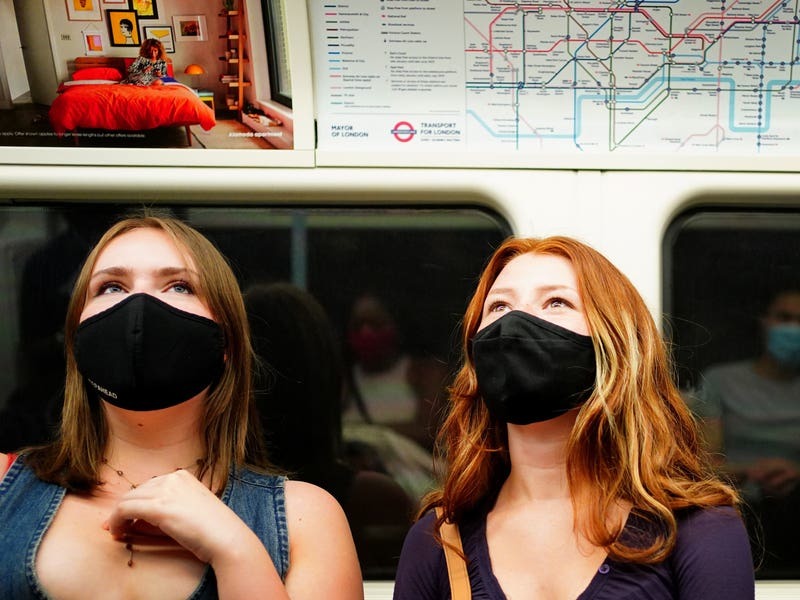 Face coverings should remain compulsory on public transport after the end of the Government’s road map out of lockdown, a trade union has claimed.

Unite, which represents tens of thousands of public transport workers, claimed it would be “gross negligence” to end the requirement on July 19.

Boris Johnson is expected to announce on Monday that face coverings will no longer be required in many situations from the so-called Freedom Day.

“Rates of infection are continuing to increase and not only does mask-wearing reduce transmissions, it helps provide reassurance to drivers and to passengers who are nervous about using public transport.

“The idea of personal responsibility and hoping that people will wear masks is absolutely ridiculous.

“Members are already reporting there is an increase in passengers ignoring the rules on mask-wearing.

“Until rates of Covid-19 are fully under control, throughout the whole of the UK, the rules on mask-wearing on public transport should remain in place.”

Care minister Helen Whately was asked on BBC Radio 4’s Today programme if she would continue to wear a mask when commuting by train from her constituency of Faversham, Kent, to London.

She replied: “I think it’s the sort of environment where, if something’s crowded, I think I might.”

This comes after Communities Secretary Robert Jenrick was asked on Sky News’ Trevor Phillips On Sunday programme whether he would “get rid” of his mask after July 19 if permitted to do so.

He responded: “I will. I don’t particularly want to wear a mask. I don’t think a lot of people enjoy doing it.”

Mick Lynch, general secretary of the Rail, Maritime and Transport union (RMT), claimed that “yet again there’s a real danger of the Government making up policy on the hoof on critical issues”.

He continued: “Back in the real world, discussions are ongoing at industry-wide level but all parties are having to second-guess what the Government will say later today and that is not good enough.

“All the indications are that the Government are going for a free-for-all, whereas common sense and medical advice seems to indicate that some level of control should remain in place in the public realm.”

Even if the Government eases the rule on face coverings on public transport, operators could make them a condition of carriage.

The Confederation of Passenger Transport, which represents the bus and coach industry, has previously warned that any relaxation of rules in retail and hospitality settings must apply to public transport, to avoid the latter facing a “stigma”.

Greater Manchester Mayor Andy Burnham wrote on Twitter: “I struggle to see how ministers can drop the requirement to wear masks on public transport without causing real problems for some people who are dependent on it.

“Those more vulnerable to infection or anxious about it will be put in a very unfair position. Rethink needed?”

A spokeswoman for Mayor of London Sadiq Khan said: “On the continuing wearing of face masks, it is important that we continue to follow the science around the extent to which they limit transmission on transport and in busy indoor spaces.

“Evidence shows that the wearing of face masks gives many Londoners the confidence that they can travel safely on public transport.

“People feeling confident they can travel on our Tubes, buses and trains as they get busier will be a vital part of encouraging more people into central London as restrictions are lifted further, and it is something that we will continue to look at closely.”