A takeaway offering authentic Thai food operating from inside a 200-year-old local pub? Tom Ogg spoke to Meaw Sriwirote and Tony Coles about the origins and ever-growing popularity of Little Meaw’s Thai Kitchen

NOT many people would typically reply ‘the pub’ when asked for the best place in Jersey to try authentic Thai food.

That might be set to change, however, as more and more Islanders are discovering the home-grown delights of Little Meaw’s Thai Kitchen.

Based in the Bagot Inn on Georgetown Road, the local Thai takeaway is the brainchild of Meaw Sriwirote, who co-founded and co-runs the independent outlet with her partner, Tony Coles.

‘It has always been my lifelong dream to run my own kitchen,’ says Meaw, chatting alongside Tony in the kitchen from which they operate at the rear of the Bagot Inn.

‘I do all of the cooking and Tony does the home deliveries. We have a Latvian girl who helps out in the kitchen on Friday and Saturday nights, but otherwise it is just the two of us.’

‘Meaw prepares everything in the kitchen right here, with all of the sauces and pastes made from scratch,’ says Jersey-born Tony. ‘She is an absolutely incredible cook, which is why I think the word-of-mouth has been so strong.’

Indeed it has. Since opening in January 2020, Little Meaw’s Thai Kitchen has amassed a dedicated and ever-growing local following, with fans appreciating the authenticity of Thailand-born Meaw’s dishes, as well as the personal touch which she and Tony bring to the business.

‘We aren’t on food.je or anything like that,’ says Tony, who spent 30 years with the Jersey Police prior to his retirement.

‘If anyone wants to place an order, they call us directly – we ask everyone to call, not text – and they can then tell us what they’d like and how they’d like it. Meaw’s food is quite bespoke and so she will cater dishes to every customer’s own personal tastes.

‘We don’t like to keep anyone waiting for their food and so we never take too many orders at a time, although Meaw is very good at having two or three rings on the go at once,’ he continues. ‘I always try my best to get deliveries to people at the specific time they requested.’

‘Before Christmas last year, we had someone call two weeks in advance to place an order for Christmas Eve,’ adds Meaw with a laugh. ‘We encourage people to order in advance, even if just an hour or two.’

Although based in the Bagot Inn, Little Meaw’s Thai Kitchen is an entirely independent business, with Meaw and Tony renting the kitchen from the pub management.

‘If anyone wants to sit in the pub and enjoy some Thai food, they’re welcome to do so,’ says Tony. ‘There is a snug area at the entrance of the pub, which is very cosy and secluded, and which is a nice peaceful space to enjoy a meal away from the crowd. We get a lot of people eating in and sitting there to enjoy their food.

‘We were about to close the kitchen one night recently when suddenly this big group of people came into the pub from the Merton Hotel – and they all wanted food. We’re very flexible and so we stayed open longer just for them.’

‘There was a queue stretching all the way from the kitchen right over to the pool table,’ laughs Meaw. ‘The pub had sent their staff home early and they had to recall them to help out behind the bar.’ 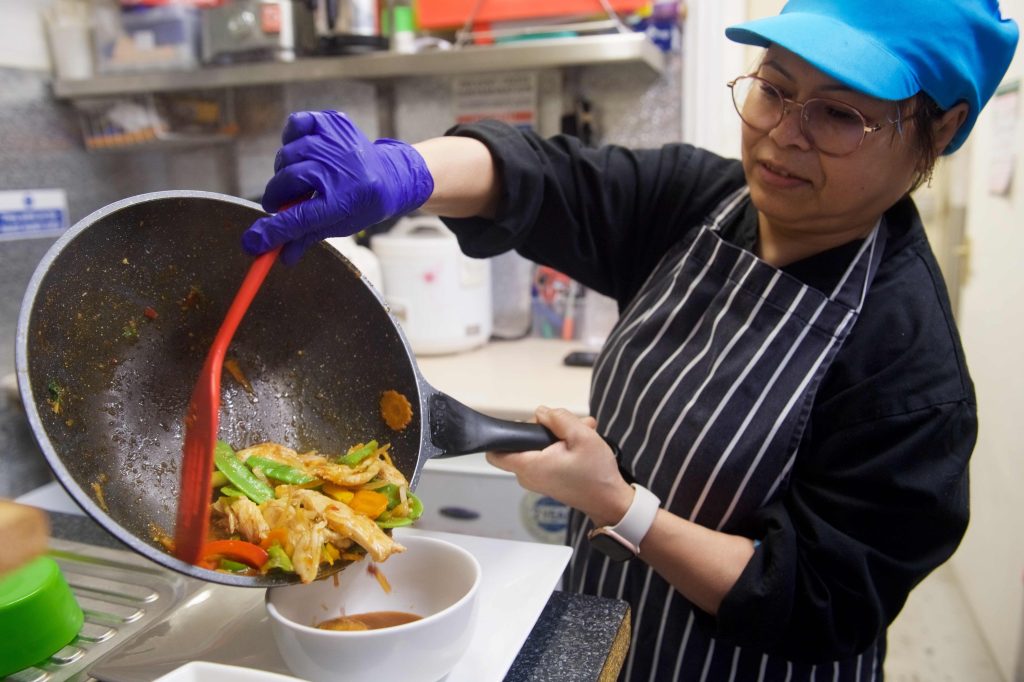 Raised in the Isan city of Nakhon Ratchasima in the northeastern region of Thailand, Meaw says that she first developed her love of cooking during her teenage years.

‘Growing up, I was a very naughty kid,’ she laughs. ‘I just wanted to play football and climb trees and so my dad put me in boarding school. There were many different vocations taught in the school – hairdresser, teller, cook – and I tried them all, but cooking was the only one I liked.’

After leaving school, Meaw became determined to establish her own business and moved to Jersey in 1998 with the aim of doing so.

She worked in several different venues over the ensuring years, among them the Thai Dicq Shack and the former bus station canteen at the Weighbridge, and it was during this time that she and Tony first met.

‘When the opportunity to take over the kitchen in the Bagot Inn became available, I knew straight away that it would be a chance for me to have my own kitchen,’ she says.

The pairing of a 200-year-old Jersey pub and a Thai takeaway may well seem rather unorthodox, yet the unconventional location has never been a concern for Meaw or Tony.

‘We knew we could make it a success,’ says Tony. ‘The Bagot Inn is one of the last authentic working men’s pubs in Jersey. I think it’s very sad that so many traditional pubs have disappeared over the years.’

When it comes to customers, Tony says Little Meaw’s Thai Kitchen has thus far attracted Islanders and holidaymakers from all walks of life.

‘There was a couple staying at Longueville Manor recently and they came into the pub for a meal. Afterwards, the bloke said to me: “That was one of the best Thai meals I’ve ever had. I wasn’t expecting it to be so good”. People are often surprised at the sheer quality of the food, especially when they’ve just called in for a bit of pub grub.’

‘We have a couple who often drive all the way over from St Ouen just to sit and have a meal,’ says Meaw. ‘We even have customers who call two or even three times a week and order food.’ 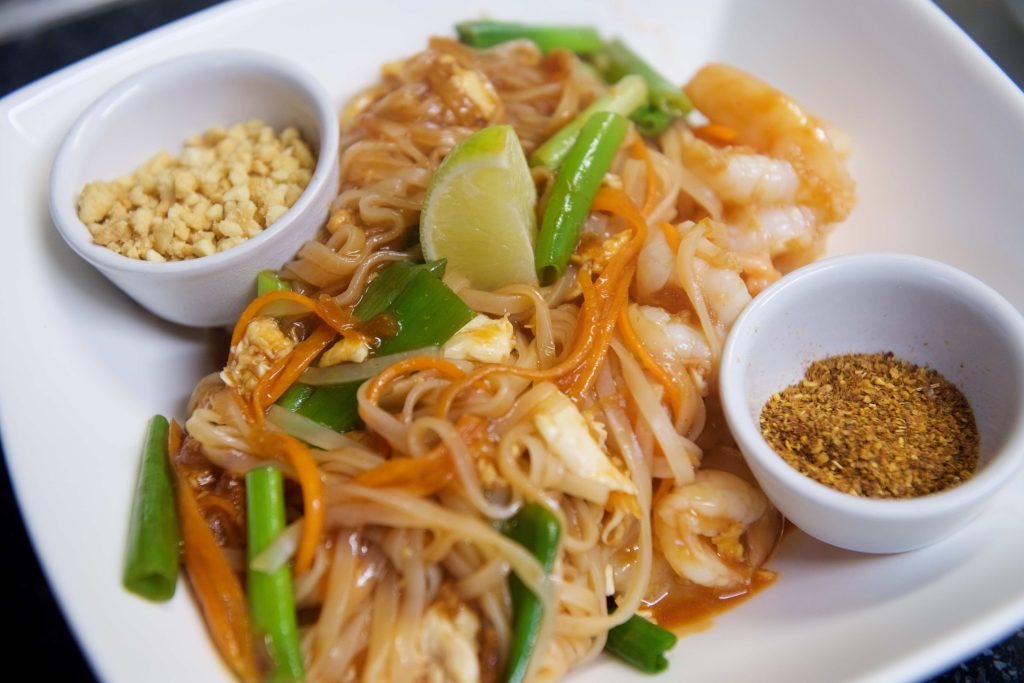 The quality of the food created by Meaw isn’t only due to her culinary talents, but also to the ingredients used in her dishes.

‘We use mostly local ingredients, with meat and fish from Valley Foods, and veg from Homefields Farm,’ says Tony. ‘Thai food is very good for people who are vegetarian or vegan, because a lot of Thai dishes are made without meat, and Meaw can always tailor dishes to make them vegan-friendly or suitable for those who want gluten-free.’

The heat and spiciness of dishes is something which Meaw will similarly change to suit individual taste buds.

‘If someone says they want it hot, I will ask: “Do you want your hot or do you want my hot?”, she laughs.

‘I didn’t use to like my food too spicy but Meaw has definitely increased my tolerance,’ says Tony. ‘One of her signature dishes is Thai crispy ribs, which has this incredible fruity taste – but it’s a hot fruity taste.’

‘Not many people realise that chilli peppers are very high in vitamin C,’ adds Meaw. ‘That is why it is so good to eat Thai food when you have a cold. There is a very hot dish in Thailand called papaya salad, which is very popular, and which is said to make you lose weight. It is filled with vitamin C and a lot of people eat it because they think it will help them to get thinner.’

And so, despite a somewhat torturous opening period (‘We had to close less than two months after opening because of Covid and then re-open again a few months after that,’ says Tony), Little Meaw’s Thai Kitchen has thus far proven something of an underground success story.

‘I went with Meaw to Thailand three years ago to meet her family, which was the first time I’d ever been,’ says Tony. ‘There are a lot of street food vendors over there and when you eat their food, my God, it tastes so fresh it is just unbelievable.

‘I think Meaw really knows how to capture that freshness.’

* For more on details, or to view the current menu, visit the Little Meaw’s Thai Kitchen page on Facebook. To contact Meaw and Tony, or to place an order, call 07829 877 995