THERE were several reasons why it seemed pertinent to put together a write-up focused on witches and witchcraft this week.

Firstly, and most obviously, it’s Halloween and a cackling broomstick-wielding witch is still the fancy dress costume of choice for many female partygoers and young trick-or-treaters, perhaps even more so than usual this year given the recent release of Hocus Pocus 2.

Secondly, and rather less light-heartedly, there is the fact that we are currently living through a period in which innocent women are once again finding themselves publicly accused of heresy, only now unhinged mobs spout finger-wagging accusations on Twitter rather than in courtrooms, with ‘kill the TERF’ having replaced ‘burn the witch’, and with victims typically losing their rights and livelihoods rather than their lives.

Though times may be grim, there is thankfully little possibility of anything quite as macabre as the infamous witch trials of the 16th century and 17th century taking place in modern-day society.

And this is good news for Islanders because – as Jersey Heritage archives and collections director Linda Romeril notes – there were few places in the world more enthusiastic about burning witches than the Channel Islands.

‘It’s quite terrifying to think of it happening in Jersey,’ says Linda, chatting via Zoom from her office at Jersey Archive.

‘It’s the type of thing you see in films, but it’s really not something you think could have happened here, but it did.’

Indeed it did. Between the 1560s and 1660s, there were at least 65 witch trials held in Jersey’s Royal Court, with 33 leading to execution and eight to banishment, and all this from an Island population of just 10,000.

‘Given the number of people living in the Island at the time, the figures are very high,’ says Linda. ‘Guernsey was slightly different in the way in which they executed their “witches”. In Jersey, they were hung first and then they were burned, but in Guernsey they just burned them alive. So I think we were probably slightly more humane, but only slightly.’ 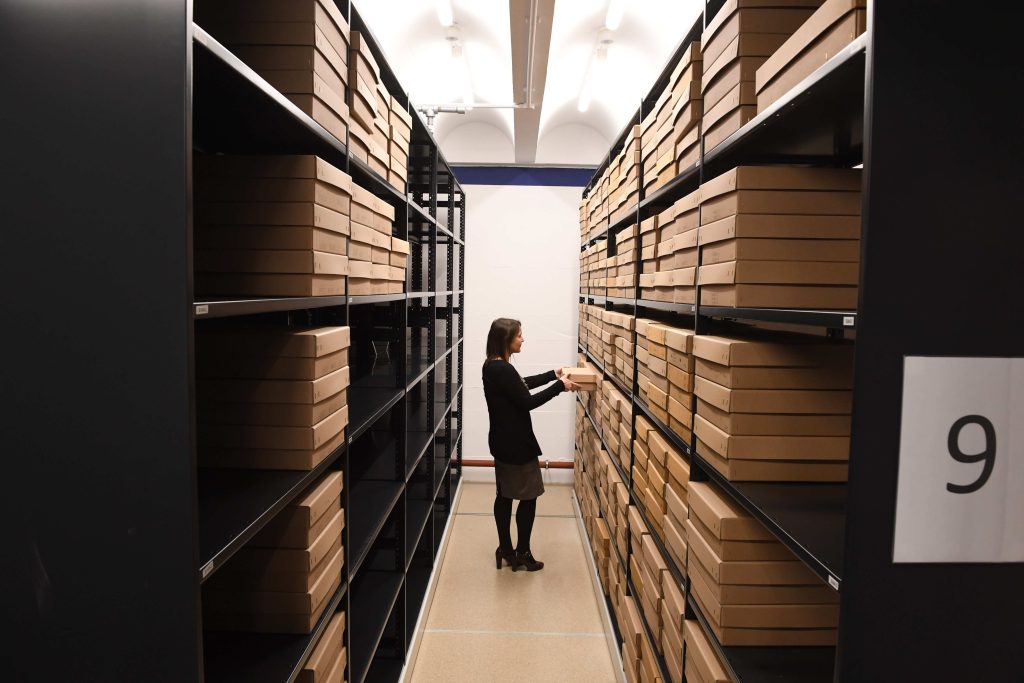 Having harboured an interest in Jersey’s history of witches and witchcraft for many years, Linda is among the most knowledgeable people in the Island when it comes to the facts and figures regarding local witch trials.

‘People at the archive always tease me and say it will be my retirement project,’ she laughs. ‘The last time there was any really extensive research [on the subject of witches] was back in the 1930s, which was nearly 100 years ago now, and so I certainly think there is a lot more we could do in order to understand precisely why there were so many trials in Jersey.

‘There were some men who were accused of witchcraft, but I’d say around 80% of the accused were women, and I want to find out why. Why were these particular women the ones who were put up for trial by their communities?’

A credible theory held by Linda is that certain women would be accused of being witches not because the accusers truly believed in witchcraft, but simply because the women were considered nuisances or oddballs and thus accusations against them would be taken seriously.

‘Looking back over the accused, you see some women turning up in court records all the time,’ says Linda. ‘They’re causing disturbances, annoying their neighbours, until it eventually gets to a point where the neighbours think: “Let’s just accuse her of being a witch”.

‘The records show that it quite often runs in families,’ she continues. ‘A family will have a bad name and so you get successive generations being accused of witchcraft. Take the Grandin family, where you’ve got the mother being accused, and then her two daughters are both accused, and so the family gets a bad name and they’re soon appearing in court.

‘Obviously not all of the accused were put to death, some of them were banished, and others were released and told to mend their ways.’

Beginning with the ‘execution on the gibbet’ of Michelle La Blance Vestue in 1562, there were multiple trials and public hangings over a 100-year period in Jersey, often with little activity for several consecutive years and then multiple executions occurring in a matter of months.

One such example of this would be 1591. According to current records, there were no executions for witchcraft over the preceding six years, and then five locals – Symon Vauldin, Beneste Jamet, Katherine Bertram, Michiel Alixandre and Michiel’s son Collas Alixandre – were all hanged in the final three months of the year.

‘Quite often if there was cause for unrest, such as a plague arriving in the Island, then there would tend to be witch trials as a result,’ says Linda. ‘It could be because people were looking for scapegoats to accuse of spreading the plague, or it could be that the women were trying to heal people who had the plague and it didn’t work and so the relatives then turned on the healer.

‘It is entirely possible that this happened to the extent that it did due to Jersey being such a small community,’ she adds. ‘I find it interesting how communities can pull together in times of stress – but they can also go in the opposite direction.’

Of course, the most well-known witch trials are those that took place in Salem in the late 17th century, during which more than 200 people were accused of being witches in the space of just 16 months, with 19 being hanged as a result an elderly British-born farmer, Giles Corey, was slowly crushed to death over the space of three days for refusing to enter a plea). 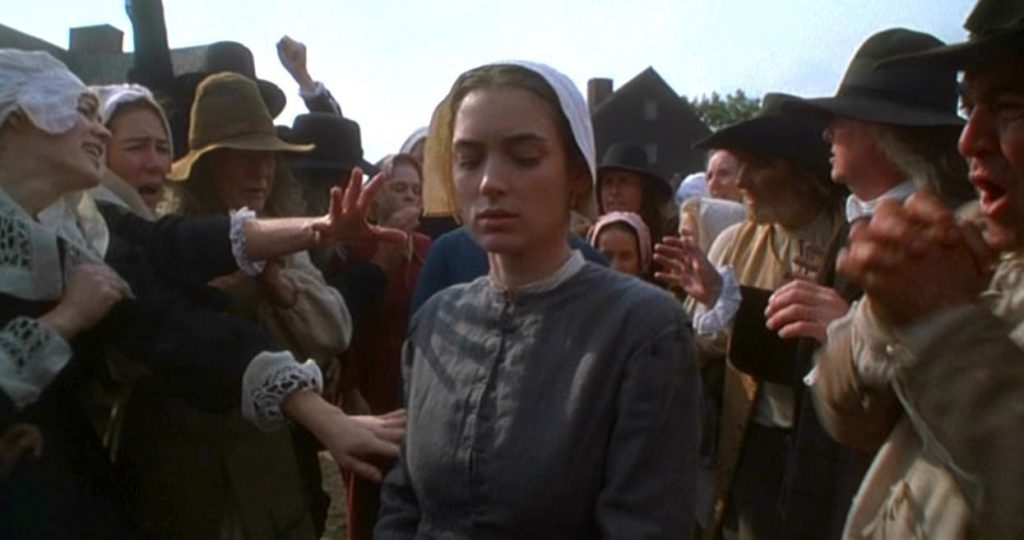 Winona Ryder in The Crucible (1996), which details the Salem witch trials of the late 17th century

Mercifully, Jersey never quite reached such a level of mass hysteria, although the methods by which the accused were made to stand trial were nevertheless sadistic.

‘If you were accused then you would have two options,’ says Linda. ‘Either you could confess, and some people were kept in prison at Mont Orgueil for up to a year in order to get them to confess, although obviously it wouldn’t generally end well for you if you did. Otherwise there would basically be a parish indictment. When you think of a stereotypical witch trial, it is very much neighbours doing the accusing, and those who were accused of witchcraft were often slightly on the fringes of society. They would be elderly ladies living on their own, or healers who were doing things outside of the normal medical procedures. And then all it takes for a little bit of hysteria is for someone to say: “Well, I went to her and she gave me this and then this happened and it caused me to do this”.’

Assuming the accused pleaded not guilty, there would then be an official inquiry, albeit one in which those deciding the fate of the accused were exclusively male.

‘There would be a jury of 24 men and there would have to be a five-sixth majority for a guilty conviction, which would be punishable by death,’ says Linda. ‘There was a legal process behind it but, of course, it was all effectively dependent on your neighbours being witnesses.’

It wasn’t solely word-of-mouth gossip that could lead to a guilty verdict, however, with some of the accused having their heads shaved in order to find incriminating marks.

‘They were just perfectly natural birth marks, obviously, but such marks were seen as proof that the accused were definitely witches,’ says Linda. ‘It could be any kind of unusual mark in various different places. For instance, Marie Esnouf – who was convicted of the diabolical crime of sorcery in Jersey’s Royal Court in 1648 – was found to have a dark mark on the roof of her palate. She had already been accused by her neighbours so this was seen as the final proof.’ 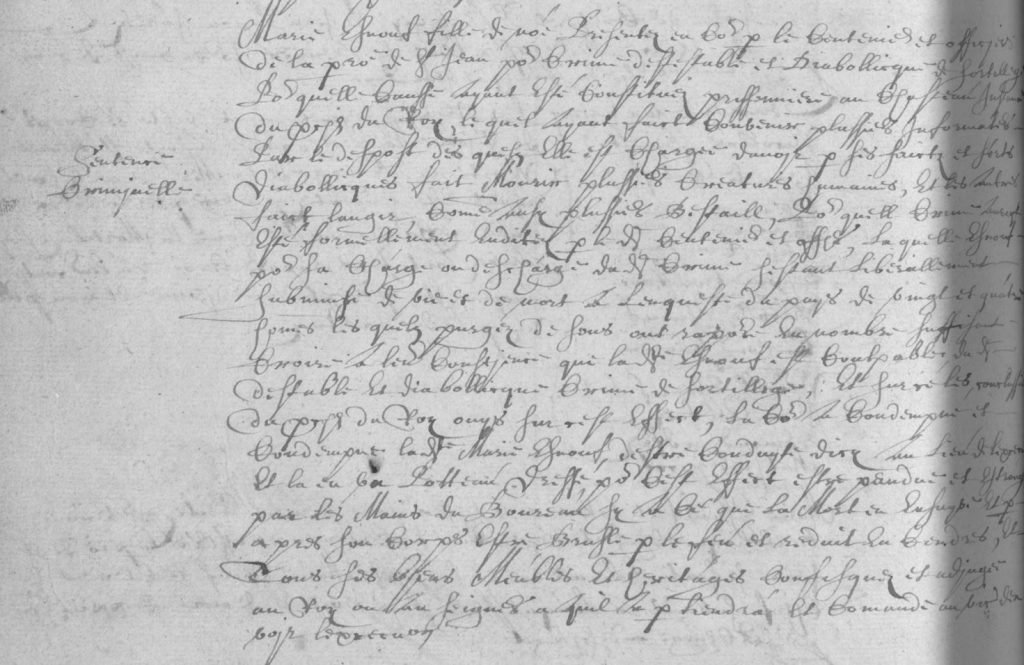 A record of the trial of Marie Esnouf from Jersey Archive

Regarding the aforementioned Salem Witch Trials, there was one Jersey-born individual – Philippe d’Anglois – who was unfortunate enough to find himself living and working in the coastal Massachusetts city at the time of the trials.

‘Philippe became Philip English when he emigrated to America in the 1660s,’ says Linda. ‘He was a merchant and he settled in Salem in 1670 and married a lady called Mary Hollingsworth.’

Unfortunately for the couple, Mary was soon after accused of witchcraft and, a week later, so too was Philippe: ‘We have a copy of his arrest warrant and it basically claims that he committed witchcraft upon the bodies of a number of young girls living in Salem at the time. He and Mary eventually escaped from jail and went to live in New York, and so they avoided trial, although they did return to Salem after the witch trials had ended.’

Closer to home, there remains a considerable amount of Jersey folklore regarding the Island’s connections to witches and witchcraft, although, as Linda says, the reality isn’t always quite as alluring as the mythology.

‘It is Jersey folklore that the little stone ledges jutting out from some chimneys in the Island are witches’ seats and that they were built to appease the witches so they wouldn’t do anything bad to the owners of the house. I suspect, though, that there is a slightly more mundane architectural reason for them being there and it’s just part of construction process to keep the roof in place. But the legend persists.’

Another enduring legend is that of Rocqueberg, or Witches’ Rock, a granite outcrop situated near Green Island in St Clement.

‘The story with Rocqueberg is that the witches apparently used to dance around the rock on the Sabbath and so it was seen as a focal point for their worship,’ says Linda. ‘The story goes that the devil appeared on the rock, and there is supposedly an imprint on the rock that is said to be the devil’s hooves.

‘There are lots of stories around St Clement. For instance, it is said that the fishing fleet would give every thirteenth fish they caught to the witches in order to appease them.

‘There really is an awful lot of folklore that has built up around what was a real part of Jersey society,’ she adds.

‘I think it is really fascinating – and I’m sure there is still plenty more to be uncovered.’