Dr Ivan Muscat: Looking forward to a lightening up in spring

As his public profile has risen throughout 2020, the deputy medical officer of health has received praise for his measured and reassuring approach while delivering news and messages of vital importance.

Yesterday, he once again appeared before the cameras with the eyes of the Island on him as further restrictions were announced – including the closing of all non-essential businesses – in an effort to get to grips with the second wave of the pandemic.

Dr Muscat said: ‘We enjoyed quite a long period of low infection rates in Jersey, which certainly continued throughout most of October, and then started to falter in November – particularly in the latter half of November. Unfortunately, there has been a significant increase of late.’

He defended the decision to keep borders largely open, despite calls to limit movement.

‘Like other countries, we saw a drop in the number of cases in summer and by that time we had a better test and trace capacity, which was also helping to drive numbers down. So we ended up at one point with no active cases at all – for a brief period. Jersey is a small island and it is very dependent on its connectivity with other countries, particularly the UK, so it was imperative to have some sensible connection with the UK – that espoused our safer travel policy of categorising countries and using an appropriate test and isolation system to reduce the risk of inbound infection.’

He added that while no system was perfect, the border policy that was established was ‘studied by many other countries’ and continues to be developed further.

Though case numbers have grown there has been a glimmer of hope for Islanders as the first stage of the vaccination programme was completed earlier this month. 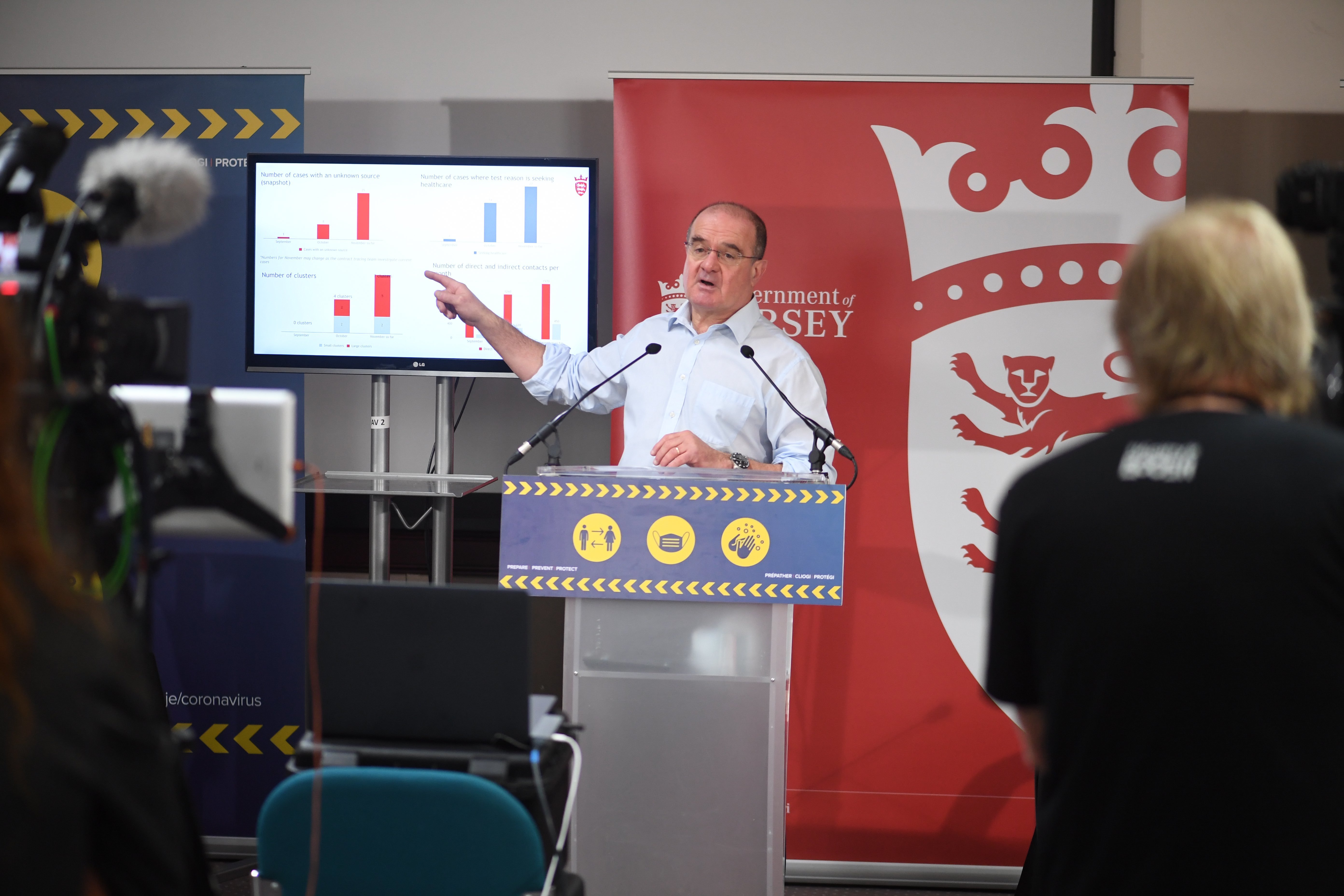 ‘The vaccine which people started working on in January has now come to be a reality and we have already started vaccinating people in Jersey,’ said Dr Muscat. ‘We have vaccinated virtually all of our care-home residents and a huge number of care-home workers, and will continue to vaccinate more and more frontline staff in the health service, both in the Hospital and in care, before working our way down the vulnerability groups.

‘We are told that in addition to the Pfizer vaccine, the Oxford vaccine is now going to be made available. We believe that the Medicines and Healthcare products Regulatory Agency will authorise the use of the Oxford vaccine later on this month, and we anticipate receiving the Oxford vaccine to deploy it in January. So we do need to keep our population as healthy as possible to be able to deliver the vaccine because you can’t vaccinate people who are unwell – or you should try to avoid it as much as possible.

‘Of course, Covid also affects staff, so if staff are unwell because of Covid then they won’t be around to look after other unwell people and there will be fewer staff able to vaccinate. So we need to try and protect our system as a whole in order to give the vaccine that is now becoming increasingly available time to be deployed and rolled out, to protect the general population.’

Dr Muscat is well aware that a new, more transmissible, variant of the virus is now rippling through the UK – although he is quick to remind Islanders that it should be covered by the vaccine, and while it may spread more easily it is not capable of causing ‘more severe disease’.

He said: ‘That is rapidly accelerating in terms of dominance in the UK and given our connectivity with the UK over the last few months, it is entirely likely that this new strain has already arrived in Jersey.

‘It could very well be one of the reasons – and possibly the main reason – for the increase in numbers that we have seen in the last few weeks.’

Yesterday, it was reported that a new variant found in South Africa has now been detected in the UK.

The Island’s health service has had to rapidly adapt in 2020 to challenges it had not faced before.

Dr Muscat added: ‘In our response to Covid we have had to change the way we have worked and the degree of change has been proportionate to the amount of Covid activity that was present at the time or that was anticipated at the time.

‘The workings of the health service both within the Hospital and outside the Hospital changed significantly during our response to the first wave. Like the rest of the world, we had to rapidly speed up the technology that related to Covid – in particular the testing. I think everyone was caught on the back foot there as we needed to scale new technology and I think everyone was racing for that very limited resource at the time.

He said that one of the core changes the service made was to ensure there was increased capacity for respiratory support and beds – helped by the building of the Nightingale Hospital, which fortunately has not had to be used yet.’

Dr Muscat agreed that Jersey needed to tread carefully into 2021 and said that further mitigating factors could be introduced to help rein in the virus.

‘The numbers that we have seen going up indicate there is more Covid activity – whether it is the new variant or not,’ he said. ‘We need to respond accordingly to prevent the numbers continuing to escalate and avoid over-burdening the health service.

‘The more people who have the infection the greater the spread, so we need to work early on to try and rein back Covid activity. The degree to which we rein it back depends on the pandemic’s response to our mitigating factors.

‘If the factors that we have implemented to date are not reining back Covid activity then we may very well need to add more but we are completely mindful that all mitigation factors, all non-pharmaceutical interventions, will have negative side effects and we always try to weigh those up so that we don’t do more harm than good.

While the news of the vaccine’s progress will no doubt provide many Islanders with a sense that the end is in sight, Dr Muscat believes Covid-19 is something the world will have to work around for years to come.

‘I don’t think things will ever go back to complete normality, in the sense that Covid is likely to be with us as a background organism going forward – in the same way that influenza and many other organisms are,’ he said.

‘The likelihood is that we will have to learn to live with Covid and its variants and manage it through vaccination, and may very well have to update the vaccine to keep up with changes in the virus. I can’t predict that, but I think it is a distinct possibility that is the way it will happen, but we will just have to see.

‘In terms of when we will be free to go about our normal business because Covid has ebbed into the background, I think we will be starting to approach that towards springtime – but that is only a guess and I would not like to say if that will be early or late spring – or summer. But it is around that time that sufficient vaccine would be rolled out and as the weather improves going into spring, respiratory viruses will start to ebb – giving us a better opportunity to deploy the vaccine. So that is not an unreasonable time to think that things will lighten up.’