The Big Read: ‘It’s a throwaway world in which we live today. I simply can’t do that’ 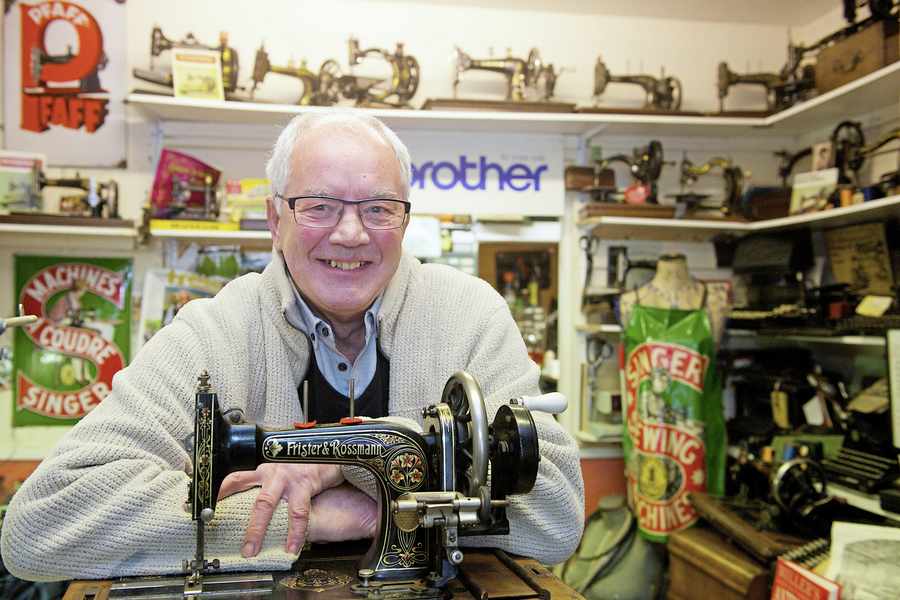 His parents’ London house was destroyed in the Blitz, but the Luftwaffe dropped the bomb ten hours after he and his mother had been evacuated to Hertfordshire.

Much of Mr Wood’s boyhood was spent growing up in a post-war landscape shaped by rationing.

In this era of austerity, household items and office equipment were preserved, rather than thrown in the bin to make way for the latest gadget, as is commonplace today.

Mr Wood was soon making a living by extending the longevity of sewing machines and typewriters in London, having left school at 15.

‘I took a job working at an industrial sewing machine shop opposite Victoria Palace, helping to maintain the machines,’ says the 74-year-old.

‘When I turned 18 I decided to go into the typewriting engineering business and worked for Hermes typewriting company in Kensington.’ 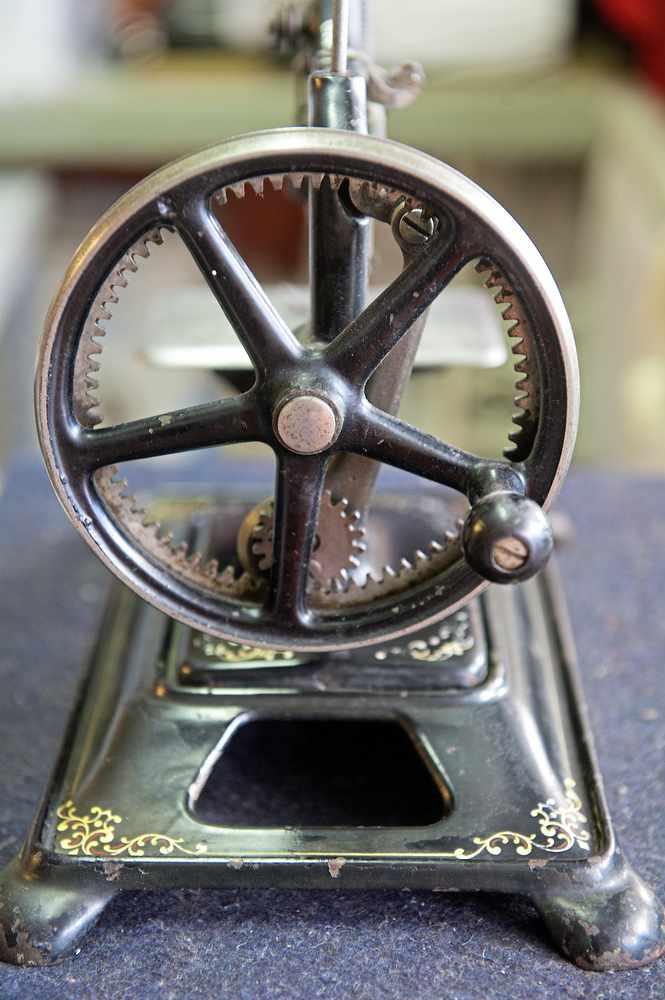 His aptitude for engineering was a family trait. Mr Wood’s grandfather had worked as an experimental engineer who helped to make sewing machines, and his father – who served with the Royal Air Force as a military engineer during the Second World War – was an industrial sewing and typewriting engineer in London.

‘My dad used to go down to Fleet Street and look after all the newspapers’ big printing equipment too.’

It was with his parents that he first visited Jersey on a holiday in 1959, and he settled in the Island in 1962.

‘I wanted to get away from London. One day my dad was offered a job in Jersey that came with a house. He didn’t take it and I thought, “right, I’m going to go to Jersey anyway” and off I went.’

He arrived in the Island with £5 to his name – ‘that’s all I had in my post office savings account’ – and after working as a barman at Vic in the Valley and as a manual labourer at the quarry, he became a service manager at Collins, the office equipment and supplies company.

‘They were based in the Royal Square. I left Collins just after decimalisation in the early Seventies.

‘I started working for myself, repairing and selling office equipment including typewriters.

‘And I rented a basement flat in Midvale Road, where I went every Saturday morning to build up a little museum of typewriters.’

When he needed more room, he set up shop in Bath Street.

‘I ran the shop from the very start as a base for repairing typewriters and then rented the shop premises next door as a sewing machine repair shop. I went out on calls to repair machines too.’

Forty years later, his Sewing Machine Centre in Bath Street is still going strong, supported by a loyal customer base. 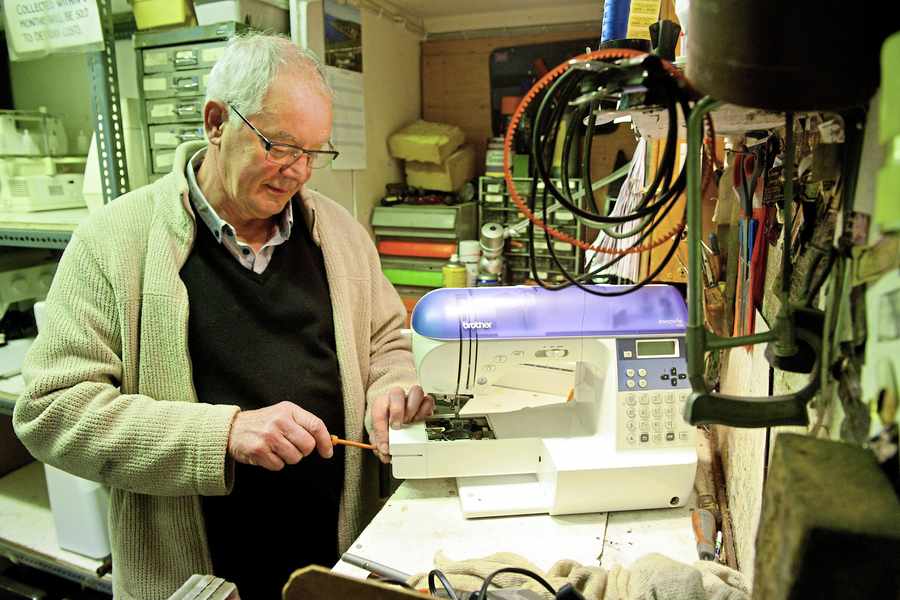 ‘My best customers are the Portuguese – they love sewing.’

Although the typewriter’s place in the generic office was usurped by the personal computer, Mr Wood still owns approximately 30 antique typewriters, some of which are more than 100 years old.

Having closed his museum at Midvale Road in the 1980s, many of the typewriters in his collection remain on display at his shop in Bath Street.

Of the more modern examples that he has on show are the Hermes 9 and a red Olivetti Valentine model.

According to Mr Wood, this exact Hermes 9 model in his shop was used by the JEP in the 1950s, and he says the Olivetti is something of a 20th century design icon.

‘The red Olivetti Valentine has been displayed by design museums internationally.’

Mr Wood says the model can fetch up to £400 on eBay, but insists he would never sell it.

He admits that the significance of these machines is often lost on the youth of today.

‘I’ve had kids come in here and they’ve said “What’s that?”

‘I replied, “That’s a typewriter”, but they remain expressionless – nowadays kids don’t know what a typewriter is!’ 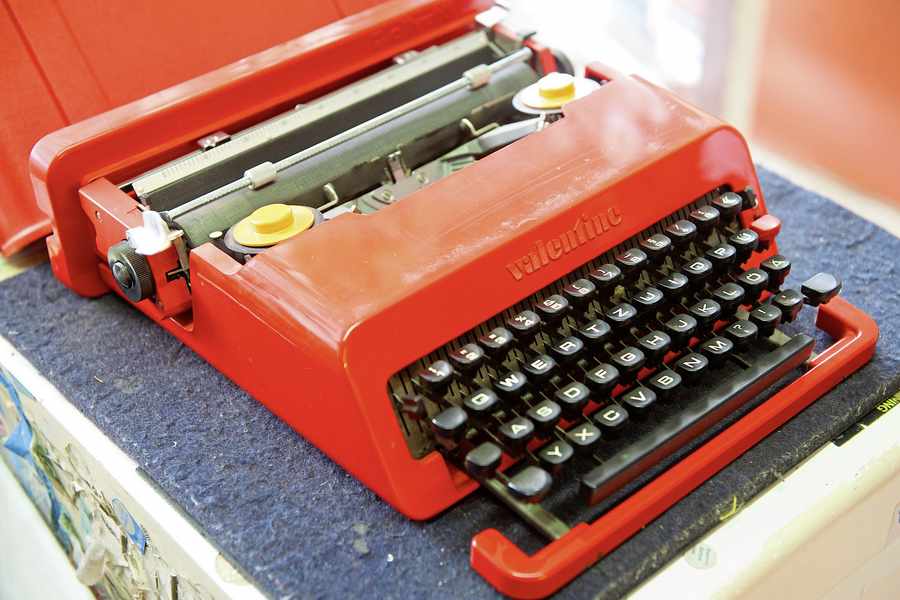 A lot has changed since he first moved to Jersey over half a century ago, and he says the pace of life in the Island has increased almost as quickly as the evolution of modern technology.

Although many people would still maintain that Jersey is a haven of tranquillity compared to the UK’s urban areas, Mr Wood insists that in the early Sixties, Jersey ‘really was a paradise’.

He adds: ‘It’s got a lot busier, especially in town with all the traffic.’

Mr Wood, who has never employed anyone – ‘I’ve always been a one-man band at work’ – says he has loved his job since his first day of trading.

‘Someone would bring in a different machine each day and it would present a different problem every time. I enjoy solving those problems.’

And he loves collecting office equipment from a bygone era. He even has a pre-war communications switchboard from the 1930s, once used by Voisins department store.

‘Equipment from the olden days is really well made, but it is a throw-away world in which we live today. For example, these days if someone’s printer breaks, they just throw it away and buy a new one.

‘I simply can’t do that and I prefer to collect equipment.’

The only sewing machines he has willingly parted with were for charity. Over the years, he has donated dozens of them to needy village communities in Kenya, Africa, with the help of Jersey-based charities.

‘Representatives from charities like Mustard Seed would come into the shop. I would do up old sewing machines and donate them to those charities, and they in turn would send them to Kenya.’

An enterprising sort, Mr Wood has recently come up with a new commercial use for Singer sewing machine treadles – selling them as garden furniture.

He fixes thick wooden boards over the top of each treadle to turn them into sturdy tables.

‘They are very stable and I also paint the treadles in different colours. I think they make really nice garden furniture.’

He is passionate about military history and owns a 1942 military Jeep which he bought from a military vehicle trader in the UK. He is also a member of the Occupation Society and the living history group, 1781 Jersey Militia.

‘We do re-enactments of the Battle of Jersey and we go on parade for the Queen’s birthday. I’ve got thousands of military history books at home and I’ve been to all the battle fields – in France, Belgium and Holland.

‘I am a member of the Normandy Veterans’ Association and used to go down to Normandy in a convoy of military vehicles for the anniversary of the D-Day Normandy landings.’

Mr Wood, who has two granddaughters and whose son, Mark, runs a painting and decorating business in Jersey, is considering closing his sewing repair shop at the end of the year, although he admits he will probably continue working in some capacity.

‘If I did close the shop I wouldn’t be able to just get rid of all this stuff – I wouldn’t want to.

‘I don’t see the point in retiring completely and I think I’ll probably carry on working one way or another – I believe that I’m the only sewing machine engineer left in Jersey.’

Mr Wood, who these days works flexible hours and takes ‘many holidays each year’, has always led an active life.

He enjoyed hill walking in Scotland every year for 20 years, and he still keeps fit by playing golf and going clay pigeon shooting.

He used to play the drums as a member of a local rock and roll band with his mates in the Sixties, and he loves listening to music – particularly jazz.

‘I have a 20-ft high pile of jazz LPs at home. I like the simple things in life: repairing, reading and jazz.’

Mr Wood may enjoy listening to the Dave Brubeck Quartet’s seminal 1959 jazz album Time Out on an evening, but don’t expect him to call time on his trade any day soon.