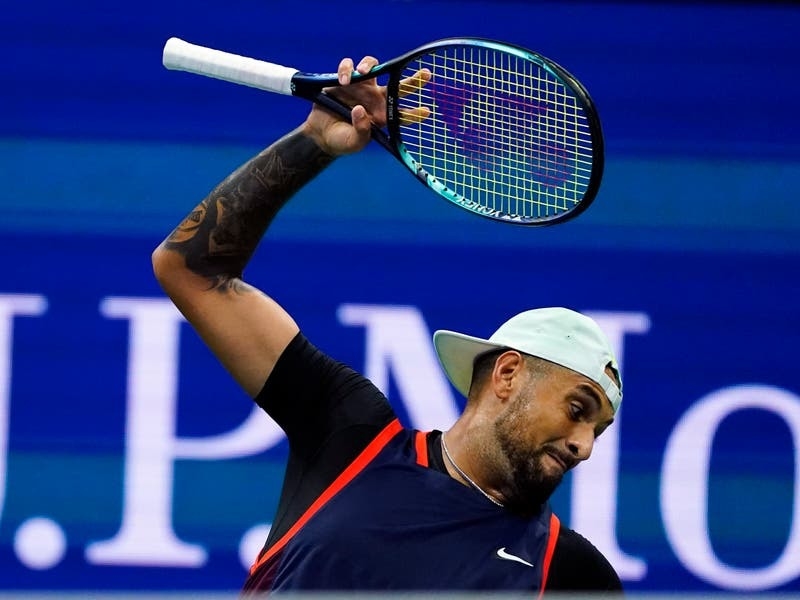 Nick Kyrgios was left “devastated” as his quest for a first grand slam title at the US Open ended with a five-set quarter-final defeat by Russia’s Karen Khachanov.

After reaching the Wimbledon final, Kyrgios arrived in New York motivated to try to go one better but he was unable to find the same tremendous level he showed in beating defending champion Daniil Medvedev in the fourth round.

Having congratulated Khachanov, Kyrgios, who had earlier been given a warning for slamming a drinks bottle on the ground, showed his frustration with the result by destroying two rackets and then walking swiftly off court.

He came into the press room later with cap pulled low and laid bare his disappointment, saying: “I’m obviously devastated. But all credit to Karen. He’s a fighter. He’s a warrior. I thought he served really good today.

“He just played the big points well. There really wasn’t anything in it. I just feel like it was either winning it all or nothing at all, to be honest. I feel like I’ve just failed at this event right now.

“I honestly feel like s**t. I feel like I’ve let so many people down. I feel like these four tournaments are the only ones that ever are going to matter. It’s just like you’ve got to start it all again. I have to wait until the Australian Open.

Kyrgios and Khachanov were tied at 1-1 in their previous meetings on the court while, off the court, they were involved in a Twitter spat two years ago over player behaviour during the coronavirus pandemic, with Kyrgios labelling his rival an “absolute pelican”.

After the high of his performance against Medvedev on Sunday, Kyrgios looked a little flat in the early stages of this contest and took a medical timeout at the end of the opening set for treatment to his left knee.

He bounced back well in the second set but lost his cool late in the third, hurling his racket after missing a break point and then earning the warning for his reaction to losing the set after Khachanov broke.

The 27-year-old has already been fined a total of 18,500 US dollars (approximately £16,000) for four separate offences this tournament, including spitting, swearing and smashing his racket.

A break at the start of the set proved the difference, though, with Khachanov withstanding everything that was thrown at him to set up a last-four clash with Casper Ruud, who defeated Matteo Berrettini earlier.

Khachanov said of the fifth set: “It was super tough. I saw yesterday Marin Cilic, he was up a break in the fifth set, then lost the match. It’s not the only match that it happened.

“Especially when you break early, you need to hold your serve during the whole set. But I saw he was a little bit irritated, a little bit frustrated in that moment. I was really happy to take those chances. I faced a couple of break points in the middle of that set. I served well.

“I’m super happy, super proud that I could finish the match, I could take it. I’m just super happy to do this step forward to make my first semi-final.”