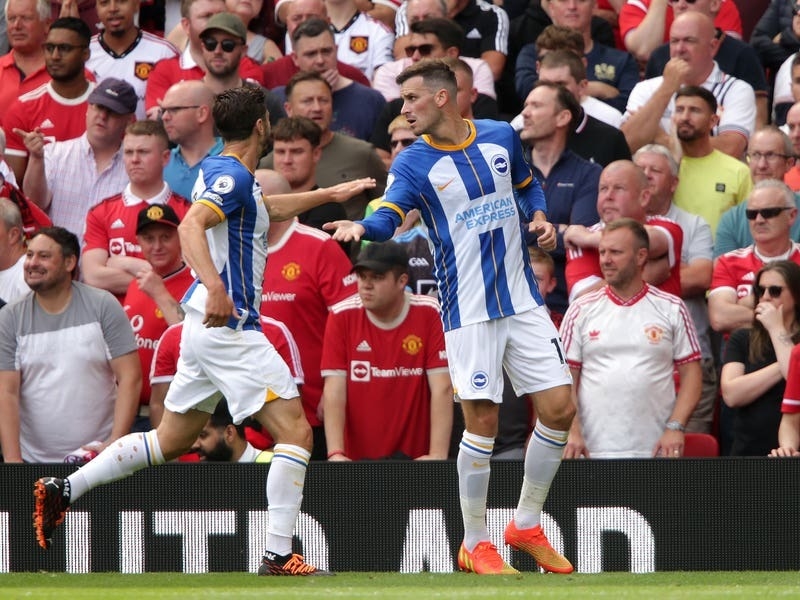 Erik ten Hag endured a chastening reminder of the size of the job he has on his hands at Manchester United as his first game in charge ended in a 2-1 defeat to Brighton at Old Trafford.

The Dutchman was brought to the club in the summer to begin a rebuild on the back of a slump that has seen them go five years without winning a trophy and there is not going to be a quick fix.

Starting with Cristiano Ronaldo on the bench, United were thoroughly outplayed in the first half as two Pascal Gross goals in the space of nine minutes gave the Seagulls a deserved lead.

It was a worthy three points for Brighton, who have high expectations this season despite losing key players in the summer, and they enjoyed a first-ever win at Old Trafford.

It was 93 days since the the nadir of Ralf Rangnick’s reign saw United hammered 4-0 at the Amex Stadium at the end of last season, but not much has changed on the pitch yet from that afternoon.

Ten Hag has been quick to instil his own methods since his appointment and that continued as he ditched usual routines by moving the team’s pre-match meal to Old Trafford, which left the club having to hastily rearrange plans for some hospitality guests.

Leandro Trossard pressed Diogo Dalot on the edge of the penalty area, stole possession but could only fire into the side-netting.

Having averted early disaster, it looked like United were going to take control as they forged a great chance to score in the eighth minute.

Scott McTominay got in down the right and his blocked shot fell perfectly for Bruno Fernandes, but the Portuguese blazed his effort well over.

But from then Brighton asserted themselves and they deservedly took the lead on the half-hour.

McTominay was robbed of possession by Moises Caicedo, who found Danny Welbeck’s clever run between the two centre-halves, and the ex-United striker picked out Gross at the far post, with the midfielder having an easy tap-in.

Things got worse for United nine minutes later as Brighton doubled their lead after they sliced through the Red Devils in just four passes.

Caicedo, Gross and Adam Lallana were all involved in getting the ball to Solly March, whose low shot was palmed by David de Gea straight into the path of Gross, who had carried on forward and gleefully accepted his second tap-in of the afternoon.

After Welbeck had headed Trossard’s cross off target early in the second half, Ten Hag finally turned to the Portuguese star in the 53rd minute.

And his introduction did see United spark into life as they put Brighton under sustained pressure for the first time.

Marcus Rashford skied an effort at the far post from Fernandes’ shot before Christian Eriksen’s low effort was palmed away by Robert Sanchez.

From the resulting corner, United got themselves back in it with the first goal of Ten Hag’s reign in the 67th minute.

It was not picturebook by any means as Sanchez flapped at Fernandes’ delivery, the ball landed on the back of Dalot and it ended up in the back of the net via a combination of Sanchez and Mac Allister, who was credited with the own goal.

United pushed for a way back into the game, but could only create half-chances as Ronaldo and Lisandro Martinez had shots blocked, meaning Ten Hag’s stint got off to a losing start.