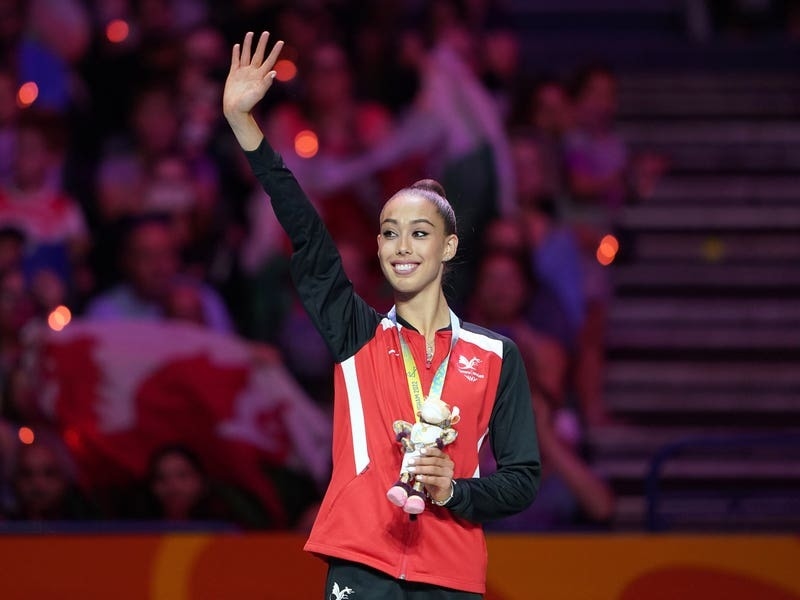 Gemma Frizelle admitted she did not expect to win a gold medal for Wales in the rhythmic gymnastics hoop final after overcoming injury problems to compete.

Set to Nessun Dorma, which is her mother’s favourite song, the 24-year-old topped the leaderboard with a total of 28.700 to edge past Cyprus’ Anna Sokolova and Canada’s Carmel Kallemaa who scored 28.300 and 28.200, respectively.

The result is Wales’ first gold in the hoop, and Frizelle revealed the result came as a surprise.

“I just didn’t ever expect it,” she said.

“Yeah it’s just amazing, I can’t believe it to be honest, so I don’t know, I can’t process it!

“When I did my routine I didn’t know if it was a good routine or not, but judging by my coach’s reaction I thought it was, because she was crying.

“When I got my score, I knew it was a good score especially for myself and it was just waiting then for everyone else’s to come in.

“It was really nerve-wracking, but I just basically stood by the TV watching.”

“I have had a lot of injuries in my career so training hasn’t always been easy, but I guess that’s the same with many athletes.

“Then a few weeks ago I found out I had quite a major injury in my back, which meant I couldn’t bend for a while, I only started bending a few days before the competition which isn’t really ideal in gymnastics.

Scotland also tasted success as Louise Christie won their first medal in rhythmic gymnastics since 1994 with a silver in the ribbon event, their best result of all time.

The 22-year-old missed out on the top spot by 0.250 points with Malaysia’s Joe Ee Ng placing first, and Christie said the experience is something she will not forget.

She said: “[It’s] amazing, I can’t really put it into words, it’s going to take a long time to sink in but yeah, I have a medal around my neck.

“Both my routines today were very upbeat, so I went out there to really enjoy it and feed off the crowd, it was just amazing.

“The support throughout the games has been amazing, everyone’s been getting behind all the nations and I think especially the home nations, it’s been amazing them clapping along and especially at the end the cheering, it’s been something I won’t forget.

“I was over the moon because I’ve been a bit disappointed with ribbon over the last couple of days I knew I could do a lot better than what I did, so I went out today and left it on the floor and I couldn’t have done it any better.”