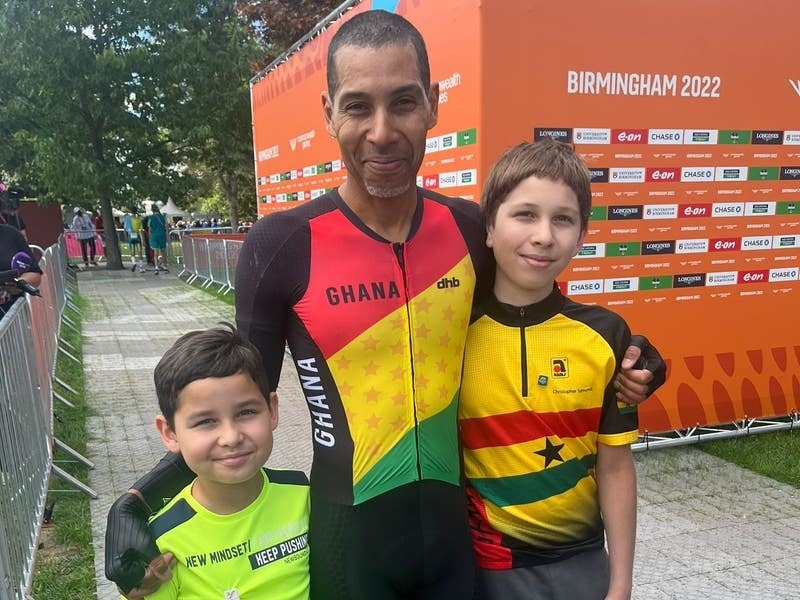 The first rider off the ramp in the men’s time trial at the Commonwealth Games was a 48-year-old riding for Ghana who spends his working days as a doorkeeper at the House of Commons.

Chris Symonds was disappointed with his time of 62 minutes 56.79 seconds over the 37.4km course around Wolverhampton – 16-and-a-half minutes slower than winner Rohan Dennis – insisting it was some way off the sort of pace he has ridden in recent club time trials.

His preparation for these Games has been built around commuting 12 miles each way from north London to the Palace of Westminster every day on a regular bike.

“I’ve been a doorkeeper for 20 years, since Gordon Brown and David Cameron were Prime Minister,” Syymonds said. “We keep the doors to the chamber, to make sure people like you don’t get in.

“I’ve barred entry to a few famous people, but I’d better not say who.

“The journey into work is about 12 miles on a hybrid commuter bike – you try to work up a head of steam, but it’s not easy with all the traffic lights.”

Symonds was greeted in Wolverhampton by local MP Stuart Anderson, who wished him luck before Thursday’s race, and he rides with the likes of Finchley MP Mike Freer, though he would not be drawn on who were the fittest politicians.

“I have had four course PBs this season,” said Symonds, who bought the £4,000 bike he rode in Wolverhampton himself. “So I would have liked to have gone better out there.”

Symonds was born in London but qualifies for Ghana through his mother. He competed in the triathlon at the Melbourne Commonwealth Games in 2006, but with no triathlon in Delhi four years later, he switched to the time trial – the first Ghanaian to compete in both events.

Symonds ended up 47th out of 54 riders, one place behind 46-year-old Jim Horton.

Horton used to call Walsall home but raced in the colours of the Falkland Islands having moved to Port Stanley to take up a role as head of immigration three-and-a-half years ago.

Horton found himself in the tent next to Geraint Thomas when he arrived in the paddock for his recon ride – all part of the way the Commonwealth Games puts a number of amateur athletes alongside the elite every four years.

After collecting bronze, Thomas himself agreed.

“They say it’s a friendly games, don’t they?” the Welshman said. “It’s been good to sort of mix with all sorts of different nations. No disrespect, but some of the nations I’ve never even heard of, so it’s been nice.

“It’s kind of strange when you have people come into the pen asking for photos that you’re racing against. But it’s a great atmosphere.”