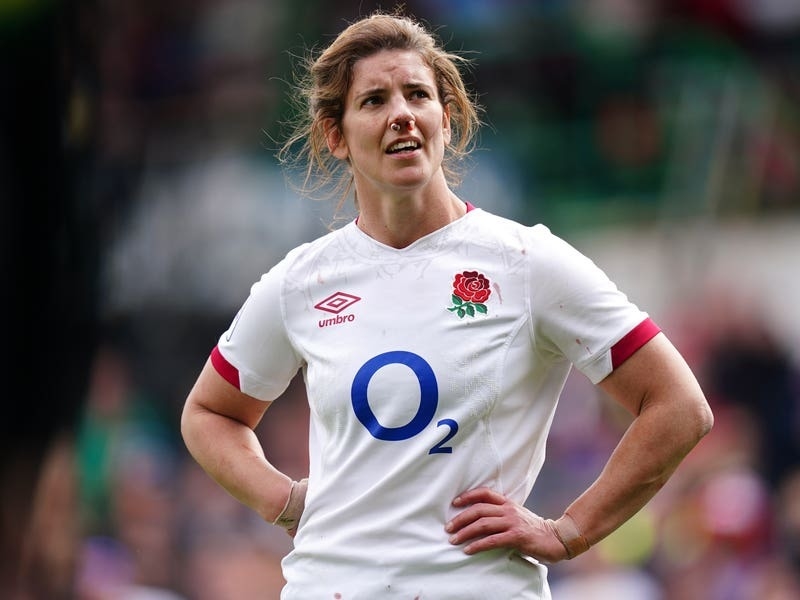 The baton for British women’s sport will soon be passed to England captain Hunter and company as the Red Roses target a World Cup triumph in New Zealand.

Currently ranked the number one team in the women’s game – and by a distance – they have also won the last four Six Nations titles and crushed perceived main World Cup rivals New Zealand 43-12 and 56-15 on successive weekends last autumn.

But she says the squad has been left “buzzing” by England’s 2-1 victory over Germany at Wembley, which gave the Lionesses a first major trophy and the first for a senior England football side since the 1966 World Cup.

“As a female sports player, it has been absolutely incredible to see how the nation has got behind them,” Hunter told the PA news agency.

“You expect it with the England men’s football team, but for everyone to be talking about it, for it to be all over television, the papers, social media, it just feels like a real turning point, not just for football, but women’s sport as a whole.

“I am inspired by what they have done. They have gone all the way to win a European Championship on home soil, which is unbelievable and fantastic to see.

“I watched the final on television, and when the cameras were panning around the stadium you saw so many young girls and you thought this is what they now expect and they can grow up and say ‘I want to be Leah Williamson, I want to be Chloe Kelly’.

“My nine-year-old niece was there – her first England match – with a Lionesses shirt on, and that was pretty cool.

“I think it would be brilliant moving forward how the two teams can learn from each other, how some of the things they do could transfer into rugby, and vice-versa.”

The Red Roses are currently building towards games against the United States in Exeter and Wales in Bristol next month.

Their World Cup opener is against Fiji in Auckland on October 8, with France and South Africa completing England’s pool as Hunter and company look to go one better than five years ago when they suffered final heartache at New Zealand’s hands.

“When we came in for training on Monday, everyone was buzzing,” added Hunter, who is the second most-capped player in women’s international rugby history with 134 Test appearances.

“There was an air of like ‘they’ve done it, now we want to go and do it as well’.

“Our World Cup has probably come at a great time to carry on momentum. We are under no illusion that going to New Zealand is going to be a very difficult prospect.

“And you throw in the challenge of a different time zone and still trying to engage with the fanbase back home, but if we can perform and ignite that excitement that the Lionesses have done, then hopefully the nation will get behind us and follow us on our journey.

“We have managed some pretty big expectations along the way – the games against the Black Ferns (New Zealand) last autumn, the Six Nations just gone.

“When you are number one, people want to come and take you off that spot, and I guess when you are up there, greater expectation comes from it.

“When you are at the top, you have got to keep moving forward. As soon as you stop and breathe out, that’s when teams come for you.”