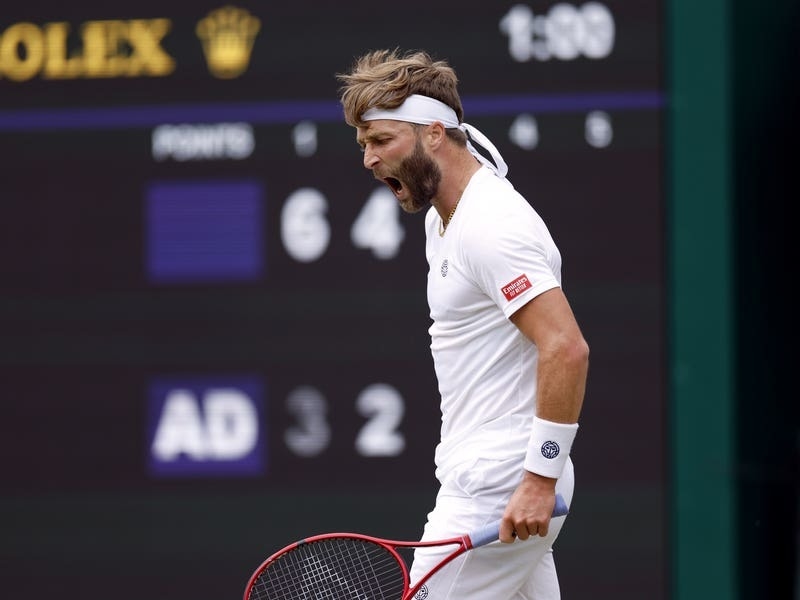 Liam Broady was pleased to be able to enjoy his latest big-court appearance at Wimbledon despite bowing out of the Championships with a 6-3 6-4 7-5 loss to Alex De Minaur.

The British number five struggled on serve against the 19th seed and did not create a break point until one hour and 24 minutes into the third-round tie.

Once Broady did get to grips with De Minaur’s serve, it made for an exciting finale on Court One as he finally break the Australian.

Broady said: “In the past I’ve been on Court One and Centre and it’s probably been more of a negative experience because I’ve not felt like I’ve been able to express myself.

“I mean, I remember I played Raonic on Court One. I think it was 5-0-1. I felt like I wanted the ground to swallow me up. I felt just awful. Whereas today I felt like I was playing well enough to be able to try and get the crowd involved.

When the 28-year-old stepped out to play in the third round of a grand slam for the first time, he had already spent seven hours on the grass following five-set wins over Lukas Klein and Diego Schwartzman earlier in the week.

A rapid opening set in which De Minaur lost only three points on serve suggested a rapid conclusion but Broady continued to show his trademark fighting spirit and recovered from an early break in the third.

It was also a tightening of the strings of his racket which contributed towards a back-and-forth final set where the world number 132 produced several classy drop shots.

“I probably ended up getting into the rhythm of it once I was a break down in the third and obviously against someone like Alex, he’s a world-class grass-courter, it’s a little bit too late,” Broady admitted.

“I sent a racket off to get it done a couple of pounds tighter. The first couple sets I felt like the ball was flying off my strings a bit.

“The racket only came back once I was a break down in the third. I brought it out and I just felt a lot more comfortable playing, felt like the ball was doing what I was trying to tell it to do. Like I said, the change was probably a little bit too late.”

In a horrible twist of fate, Broady will actually drop in the rankings due to the lack of points on offer at Wimbledon following the All England Club’s decision to ban Russian and Belarussian athletes.

The Briton shrugged off the disappointment and turned his focus on to his next major goal of appearing in the US Open main draw.

“I have probably had the least success there in my pro career. But in my junior career, it was one of the ones I made the finals at.

“From the age of like 18 to 23, 24, I played pretty much like nine, 10 months a year on the US hard court circuit, so I do feel pretty comfortable over there.

“The conditions are amazing. You stay in Manhattan, you’re on the bus to Flushing Meadows every day. The venue is incredible. Obviously it would be nice to hang around there a little bit more than I usually do.”