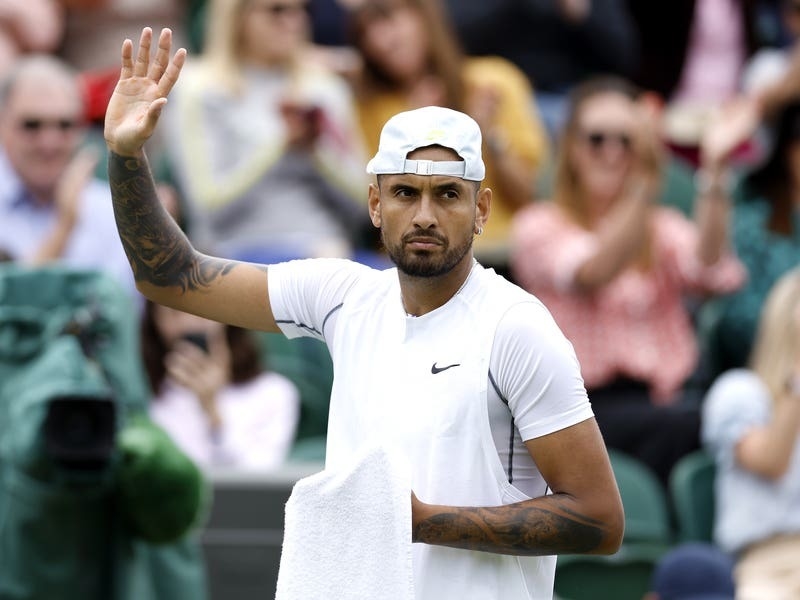 Nick Kyrgios gave a metaphorical two fingers to his critics by letting his tennis do the talking and racing into the third round at Wimbledon.

The Australian was widely condemned for his behaviour during his first-round win over Britain’s Paul Jubb.

Kyrgios had admitted spitting in the direction of a fan who was “disrespecting” him, and called a line judge a “snitch”, in a testy five-set win, the latest in a string of on-court misdemeanours in a controversial career.

It was announced late on Thursday that Kyrgios had been fined 10,000 US dollars, just over £8,200, for Tuesday’s transgressions.

But he was on his best behaviour – well, almost, he did moan about a late challenge and a spectator who coughed – as he rolled over Serbian 26th seed and Queen’s Club finalist Filip Krajinovic 6-2 6-3 6-1.

“I guess just from a personal performance standpoint, my performance in my first round was just not where I wanted to be,” said Kyrgios, 27.

“Then obviously the media’s disrespect and just everything, it was just kind of a reminder to put you all back in your place from the performance today.

“He made finals at Queen’s, top 30 in the world, seeded. It’s a gentle reminder.

“I just wanted to, I don’t know, just prove to people that, like, I’m really good. I feel like I just don’t have the respect sometimes, you know?

“There was just nothing the media possibly could tell me I did wrong today. I just know that you can’t possibly ask me anything and stir anything up.

“And I love it because then you can’t write anything. What are you going to say? Nothing today. Dumbfounded all of you.”

But he added: “I’m a singles player. My priority has always been singles. I’ve made quarter-finals here before, I’ve won singles titles. I’ve obviously put singles as my priority.

“I played nearly four hours in my first round. Me personally, it was just too much time on court. Today I made up for that. I’m doing what’s best for my body.”

Rafael Nadal was mildly inconvenienced by Lithuanian Ricardas Berankis but still came through in four sets.

The Spanish second seed, still on course for a calendar grand slam after his Australian and French Open victories, dropped the third set against the world number 106.

“Every day is a challenge, all the opponents are difficult – we are playing the best players in the world,” he said.

“I didn’t play much on grass in the last three years so every day is an opportunity to improve. I’m through and I’m very happy with that.

“I need to improve. But the fourth set was much better, a good level of tennis and the serve worked better.

“It’s important for me to accept things are not perfect and keep working, being humble, accept the challenge and think positive.”