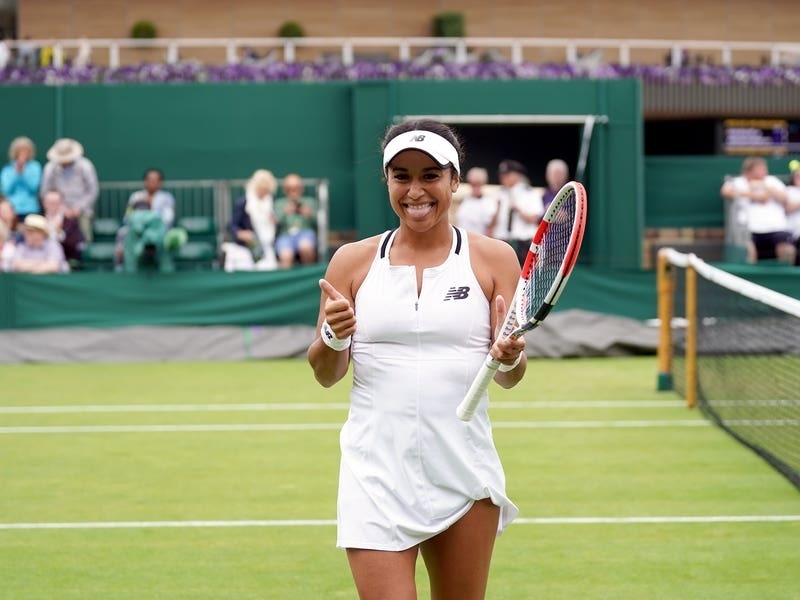 Heather Watson is ready to seize her moment and try to make the fourth round at Wimbledon for the first time.

The British number four needed only eight minutes on Thursday to wrap up a 7-5 6-4 win over Wang Qiang after bad light had brought proceedings on Court 18 to a premature end at 9pm the night before.

It means Watson is through to round three for a fourth time at the All England Club but for the first time in five years.

And while the 30-year-old will not take world number 62 Kaja Juvan for granted, she knows how big an opportunity she has.

“I respect every single person in the draw. Everyone can play tennis. You see upsets, especially in the women’s game, just constantly now because the strength and depth is so big,” Watson said.

“I’m pretty relaxed about it right now. I’ve been here before. I’m just taking it step by step, match by match. I feel as I’ve gotten older, I’ve been on the tour many years now, my highs aren’t as high, but my lows aren’t as low.

“I’m more level-headed. Before when I was first on tour, making my first third round, I was on top of the world. But I think it’s better being how I am now.”

Success for Watson means she will be back in action on Friday and have the curious honour of playing on each of the opening five days of this year’s Championships.

Her first round tie with Tamara Korpatsch rolled into Tuesday and the same also happened against Wang, but only after the Briton failed to serve out the match before the light faded.

Watson added: “I actually did (watch Love Island) to wind down. I slept awful last night because during my match I had to take caffeine to keep up for it when we’re playing at 9pm.

“So, yeah, I got probably just shy of four hours’ sleep. Yeah, I woke up not feeling great this morning. But, yeah, it’s been a really tough few days for me with the scheduling. It’s not been on my side at all.

“I’ve just tried to do the best I could, in every situation try to stay positive and in the moment. I feel like I’ve handled it really well.”

The Slovenian beat the Guernsey player 6-1 6-4 at the US Open in September.

“That was the best-case scenario today, to break and win that match quickly,” Watson said.

“Hopefully it will be a much better match (against Juvan) than the US Open because I wasn’t there that day. Completely different ball game (now).”