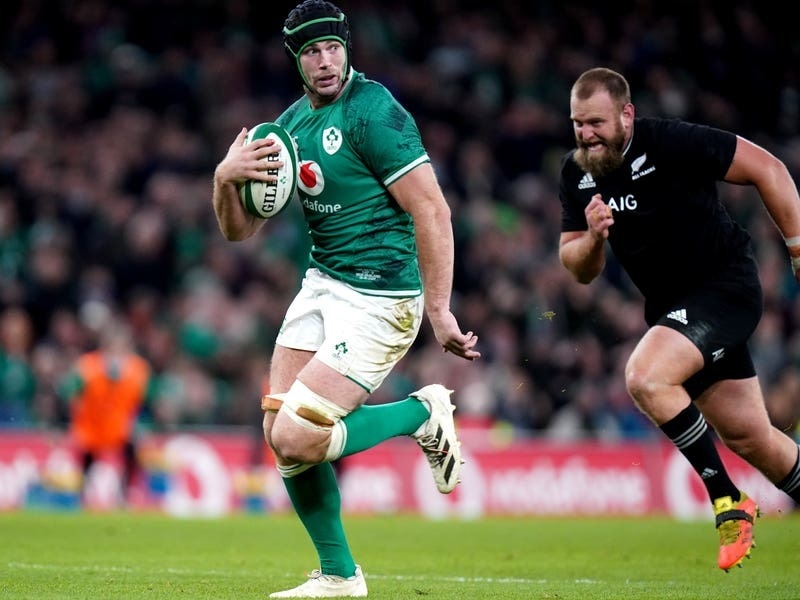 Caelan Doris says Ireland will need to surpass their stunning autumn performance against the All Blacks in order to make history in New Zealand.

Back-rower Doris was among the try-scorers in November when the Irish upset the three-time world champions with a headline-grabbing 29-20 success in Dublin.

Ireland have never won away to New Zealand and begin a daunting three-match Test series on Saturday at Eden Park in Auckland.

The formidable All Blacks hold a 46-match unbeaten run at the stadium, dating back to 1994 – four years before Doris was born.

“It’s obviously not the end of their season like it was last time (in November), they’re in their comfort zone,” said the 24-year-old.

“They’re unbeaten in Eden Park, they’ve got that track record there. But it’s massively exciting for us as well to come over to their backyard, the best nation in the world, and try and create a bit of history by winning there.

“It’s 28 years since they’ve been beaten and it would be a pretty special thing to do and our guys are very excited to try and do that.

“We know we are going to need to be better than we were in November and we think we’ve taken some strides there.”

While Ireland’s record of 12 defeats from 12 on New Zealand soil underlines the tough task at hand, they have won three of the previous five meetings between the countries, including a milestone maiden victory in Chicago in 2016.

Doris, who has been selected at number eight, insists the Irish are going into the game full of confidence.

“There’s huge belief in individuals, in ourselves, in each other, in what the coaching staff are trying to do,” he said.

“We genuinely believe that if we get our stuff right and perform to our capability then we can beat whoever we play on the day.

“I think it’s probably evolved quite a bit over the last number of years and it’s an exciting place to be.”

Doris is one of 12 Leinster players named in Andy Farrell’s starting line-up and will be joined in the back row by provincial team-mate Josh Van Der Flier.

“I suppose the more that’s up against you, the more rewarding a victory would be. I don’t think it would be quite the same if we’d played here before and won a few times.

“Playing New Zealand in New Zealand is exactly where you want to do it. We’ve had wins against them when they’ve been away from home so certainly the challenge has upped a bit but it’s where we want to be.

“The thought of making history can certainly be a motivator.”