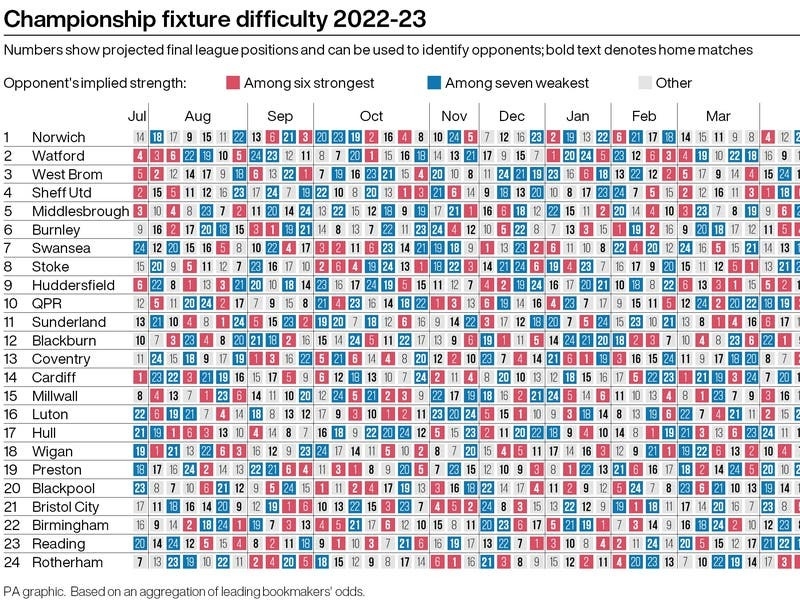 The Championship fixture schedule was announced on Thursday morning ahead of a marathon season.

New Watford boss Rob Edwards will face a test of his credentials straight away, based on his side’s opening three fixtures.

The Hornets face last year’s play-off semi-finalists Sheffield United on the opening day, before a trip to West Brom and a home game against Vincent Kompany’s Burnley.

Several other clubs expected to fight it out for promotion, according to pre-season odds, have been handed daunting starts.

Burnley, whose relegation from the Premier League was confirmed on last season’s final day, open up with a trip to Huddersfield, who were runners-up in May’s play-off final.

Canaries to sing with favourable start

The Canaries are the bookmakers’ favourites for the Championship title, having been promoted in three of their last five seasons in the English second tier, including winning the title in their previous two campaigns.

With their rivals facing tricky fixture runs in July and August, former Villa boss Smith will fancy his chances of repeating that success.

Huddersfield to fall away in spring?

Carlos Corberan’s side have been handed an exhausting schedule in March and April, facing all six promotion favourites in 12 games spread across just two months.

Rotherham, Reading, Birmingham and Bristol City will all face at least two of the predicted bottom seven in their opening six matches.

Only Paul Ince’s Royals and Lee Bowyer’s Blues face one of the clubs expected to challenge for promotion during this run.

The Millers, promoted automatically from League One last season, and the Robins are each up against four of the six promotion favourites in their final seven fixtures.