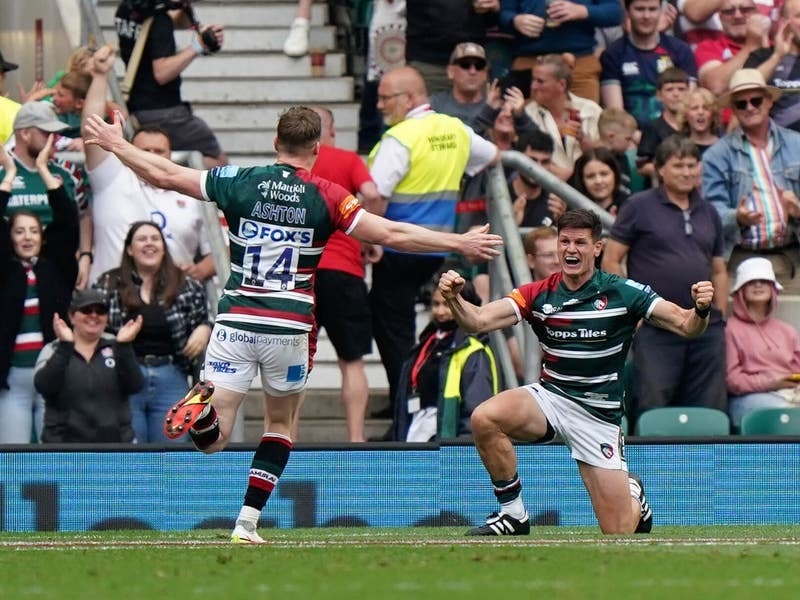 Leicester won their ninth Gallagher Premiership title after sinking Saracens 15-12 in a pulsating final at Twickenham.

Saracens’ hopes of completing a stunning rise from salary cap scandal and relegation humiliation to regain domestic silverware were dashed by the snarling Tigers.

Leicester overcame the first-half loss of injured talisman George Ford in his final appearance before joining Sale this summer to end a nine-year wait for title glory.

Tries by their South African back-row forwards Hanro Liebenberg and Jasper Wiese during an eight-minute spell in the second quarter underpinned Leicester’s victory.

Saracens scrum-half Aled Davies was off the field for both scores after being sin-binned following a high shoulder-led challenge on Tigers hooker Julian Montoya, although he was fortunate to avoid a red card.

Leicester only avoided relegation two years ago due to Saracens being punished, yet their revival under head coach Steve Borthwick has been spectacular.

And after finishing top following the regular league season, in addition to winning all 12 Premiership home games plus a play-off, they again delivered when it mattered.

Leicester found themselves under immediate pressure, and Farrell kicked a fifth-minute penalty after Liebenberg infringed through a challenge on Nick Tompkins.

Tigers grew into the game, and they gained an attacking five-metre scrum following defensive hesitancy between Saracens backs Davies and Alex Goode.

But Leicester captain Ellis Genge was penalised for collapsing the scrum, and Saracens surged back upfield through a Billy Vunipola charge.

The on-pitch temperature had gone up a notch, and Davies was yellow-carded for his challenge on Montoya, with Leicester immediately punishing them.

The Leicester backs launched a thrilling move that had Saracens back-pedalling, and Liebenberg crossed from close range before Burns converted.

But Leicester struck again just before Davies returned, with Wiese scoring after Genge took a quick penalty and Tigers led by five points at the interval.

Saracens’ Sean Maitland did not return for the second period, with Alex Lozowski replacing him, while Daly moved from centre to wing.

Leicester had all the momentum, and they exerted relentless pressure midway through the third quarter after Burns missed a long-range penalty.

Saracens’ defence was tested in all areas, yet they managed to keep Tigers out and still trailed by six points entering the final 20 minutes.

Farrell’s second-successful penalty brought Saracens back to within touching distance and the closing stages proved inevitably frantic, with Tigers substitute Matt Scott being yellow-carded for a high challenge on Billy Vunipola, and Farrell’s 76th-minute penalty levelled it up.

Burns, though, had the final say as the 32-year-old dropped a goal and Leicester could celebrate wildly.