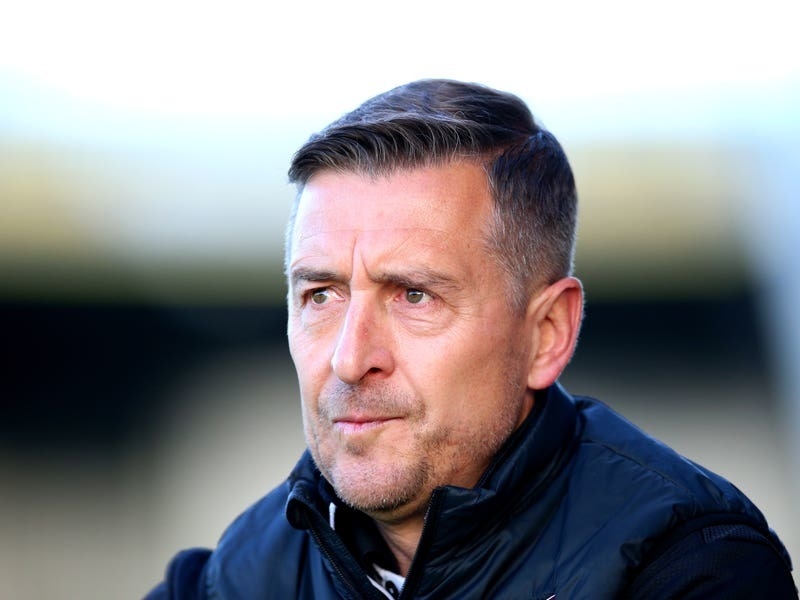 Northampton boss Jon Brady believes momentum is with his side as they look to overturn Mansfield’s 2-1 first-leg lead when the sides square up again at Sixfields on Wednesday night in the League Two play-offs.

Trailing 2-0 to first-half goals from Rhys Oates and Jordan Bowery, Ali Koiki’s 61st-minute reply put the tie back in the balance and the Stags had to defend superbly to maintain an advantage.

“We showed character and spirit to come back into the game second half and I thought we acquitted ourselves well in that second half,” said Brady.

“Credit to Mansfield. It was a strong game tonight.

“We are now looking forward to taking them back to Sixfields. We have been strong at home all season.

“We definitely felt we were in the ascendancy in the second half and we’re going to make sure we take that momentum into the next game.

“But we know what we can do.

“At half-time we told them there were certain things we’d done all season that we weren’t doing, and we looked a lot more purposeful and aggressive in our play.

“We have come back when we have had setbacks and we are probably at our best when our backs are against the wall. We come out fighting and we get results.”

Stags were ahead after 13 minutes as Bowery sent Oates into the right of the box and he rifled a low finish under Jonny Maxted.

It was 2-0 after 32 minutes as Bowery turned the ball home at the far post after Jamie Murphy had sent a low cross in from the left by-line.

But the Cobblers were back in it just after the hour when Mitch Pinnock and Louis Appere broke well down the centre and Koiki finished the move with a low finish.

Mansfield boss Nigel Clough said: “It was another home victory, which is 14 out of 16, which is incredible.

“A lot of credit to Northampton after they got the goal – they put it on us and we had to defend extremely well.

“The effort and endeavour was remarkable tonight, as it has been for most of the season.

“We didn’t play anywhere nearly as well as we have done in recent weeks and months, but that’s the nature of the play-offs.

“They did very well at stopping us playing our normal game tonight.

“I wish the second leg was tomorrow as I think we can play a lot better than we did tonight.

“I think our nerves were a bit edgy at times and we didn’t get our foot on the ball and play. I think we will be better away from home.