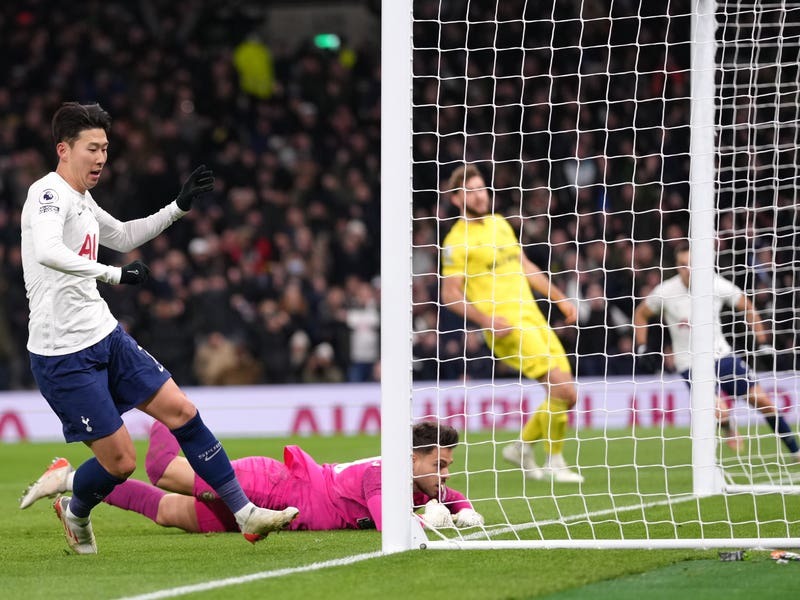 Tottenham put themselves back in the race for the top four with a 2-0 win over Brentford which extends their unbeaten Premier League record under Antonio Conte.

A first-half own goal by Sergi Canos and Son Heung-min’s second-half strike earned the victory which moved them into the top six, just two points behind West Ham with a game in hand.

Conte said that the Spurs job was his biggest challenge, but with two wins and a draw from his three games in charge, things are beginning to look up.

The England captain has scored just one goal in 12 Premier League games this term and again spurned a chance he would have been expected to net.

Brentford, who had taken points off Liverpool and Arsenal this season, were never really in the game and have lost five of their last seven league games.

After Sunday’s trip to Burnley was called off an hour before kick-off due to heavy snow in Lancashire, Spurs had been stewing on the embarrassing Europa Conference League loss to Slovenian minnows NS Mura for a week.

It did not take long for them to break the deadlock, though there was some fortune involved.

Son sent in a wicked cross after a short corner that Pontus Jansson headed against team-mate Canos and the ball flew into the net.

Tottenham continued to look the more threatening team and only a fine stop from Fernandez, who got a strong hand to Son’s 20-yard shot, stopped them extending the lead.

The Bees goalkeeper was also busy from the resulting corner as he stopped Pierre-Emile Hojbjerg’s shot with his face.

The important second goal eventually came in the 65th minute, courtesy of a lightning-quick counter-attack.

Kane sent Sergio Reguilon free down the left and his ball across goal was perfect for Son to tap in his first goal since mid-October.

It was his 75th Premier League goal for Spurs and it killed the game.

Brentford searched for a way back into it and Ivan Toney forced Hugo Lloris into a save with his feet but Conte’s side saw it out with ease.