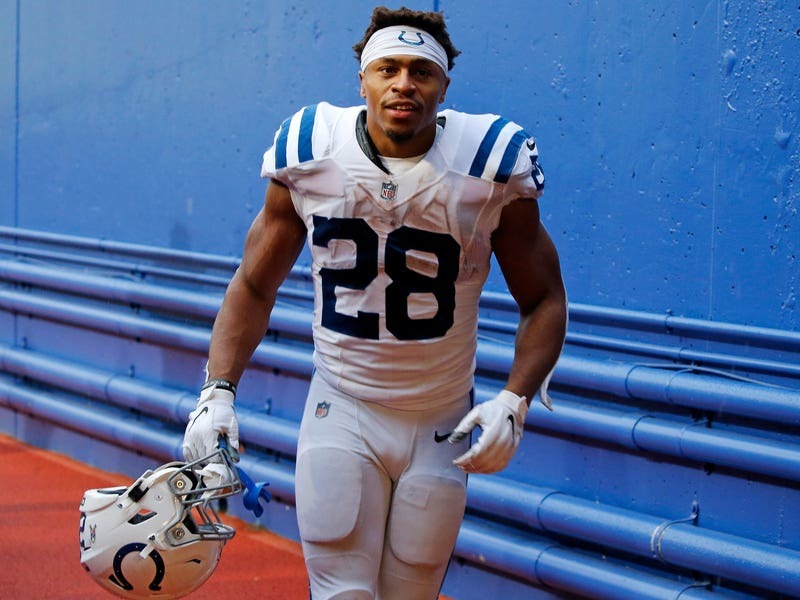 The Indianapolis Coltsā Jonathan Taylor became only the 18th player in NFL history to score five touchdowns in a game as they upset the Buffalo Bills 41-15.

The running back had a career-high 32 carries for 185 yards, moving him ahead of TennesseeāsĀ Derrick Henry as this seasonās top rusher with 1,122 yards.

In another surprise win, the Minnesota Vikings beat the Green Bay Packers 34-31, with Greg Josephās 29-yard field goal as time expired, while quarter-back Tyrod Taylor ran for two touchdowns and threw for 107 yards as the Houston Texans ended the Tennessee Titansā six-game winning run with a 22-13 victory.

Washington spoiled Cam Newtonās return to Bank of America Stadium with a 27-21 win over the Carolina Panthers as Taylor HeinickeĀ threw for 206 yards and three touchdowns.

Newton, making his first start since signing a one-year contract to return to the Panthers, threw for 189 yards and two touchdowns and ran for a 24-yard score.

The Miami Dolphins made it three successive wins with a 24-17 victory over the New York Jets, the Cleveland Browns edged a tight game against the winless Detroit Lions 13-10, while the Baltimore Ravens, missing ill quarterback Lamar Jackson, beat the Chicago Bears 16-13.

Jalen Hurts ran for three touchdowns as the Philadelphia Eagles beat the New Orleans Saints 40-29, with Jimmy Garoppolo throwing one touchdown and running in another to lead the San Francisco 49ers to a 30-10 victory over the Jacksonville Jaguars.

Joe Mixon rushed for 123 rushing yards and scored two touchdowns as the Cincinnati Bengals won 32-13 at the Las Vegas Raiders and the Arizona Cardinals moved to 9-2 with a 23-13 win over the Seattle Seahawks.

The Kansas City Chiefsā defence came up big as they overcame the Dallas Cowboys 19-9 and Justin Herbert threw for 382 yards and three touchdowns to help the Los Angeles Chargers to a 41-37 victory over the Pittsburgh Steelers.

Three yearsā jail for man who kicked woman in the stomach