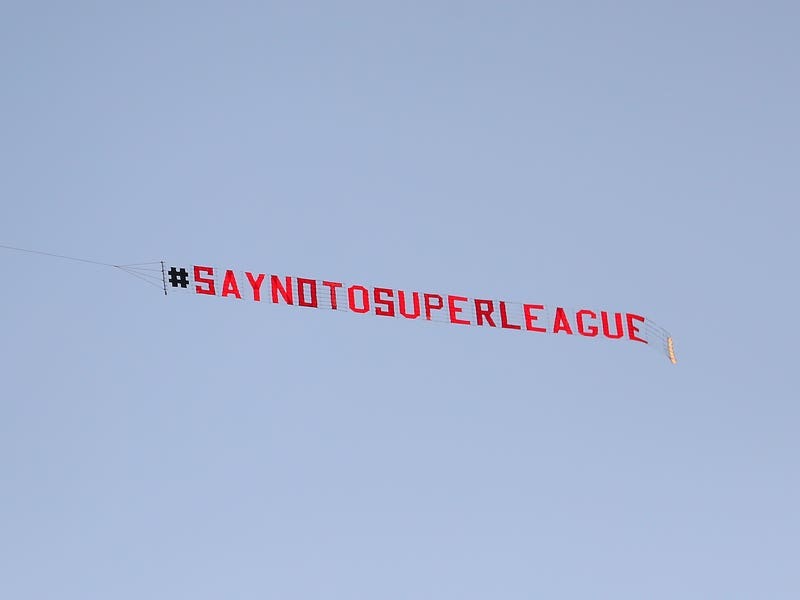 A season of struggle for the Premier League is entering its final hours, and with respect to champions Manchester City, the greatest achievement in the competition this season is arguably the survival of the league itself.

When the condensed 2020-21 Premier League season began just 47 clear days after the previous campaign ended, the threat posed from Covid-19 was clear and present.

But as it turned out, far greater threats to the league’s near 30-year existence came from within, not once but twice.

On October 11 last year, plans for ‘Project Big Picture’ were leaked to the media.

They talked about a more equitable distribution of football revenue, but the real thrust of the reforms was to grant greater power to the Premier League’s most established clubs.

They were derided by many, including Culture Secretary Oliver Dowden who described the plans as ‘Project Power Grab’, and within days of emerging had been “unanimously rejected” by the league’s member clubs in favour of a strategic review which is still ongoing.

Six months and one week after the ‘Big Picture’ leak, the Premier League’s ‘Big Six’ announced they were founder members of a new Super League, which also featured three clubs from Spain and three from Italy.

This was potentially even more devastating to the Premier League than ‘Big Picture’. Though the clubs stated their intention to remain in the Premier League, the effect of a closed continental league would have been to completely devalue the English league as a televised commodity.

Without the intrigue of qualification for Europe, the Premier League’s appeal would be greatly diminished and the Super League riches would have created an even greater gap between those six clubs and the rest than exists already.

A combination of fan protests and Government pressure led to the ESL collapsing, with the English clubs the first to fold.

They had more to lose from the collapse in the value of domestic rights than Real Madrid, Barcelona and Juventus, who notably still cling to the Super League concept even amid the threat of UEFA sanctions.

That will have been brought home to the ‘Big Six’ by an agreement in principle to roll over the Premier League’s £5billion domestic TV deal for a further three years with Sky Sports, BT Sport, Amazon Prime Video and BBC Sport this month.

It is a deal which gives financial certainty to the Premier League’s clubs, and means they are likely to dominate this summer’s transfer market.

The coming months will yield updates on the league’s strategic review, a strengthening of its rules and regulations and even an ‘Owners’ Charter’. The hope is that, combined, they will neutralise the possibility of the threats the league has faced this season ever rising again.

Heading into the summer, the picture regarding coronavirus also gives cause for cautious optimism.

The top flight survived calls for a mid-season ‘circuit-breaker’ – and even curtailment – after a rise in infections linked to the so-called Kent variant led to a series of postponements over the Christmas and New Year period.

The league reinstated the twice-weekly testing regime it adopted during the ‘Project Restart’ period at the end of the 2019-20 season, and recorded a high of 36 positive cases in the week beginning January 4.

A national lockdown combined with a tightening of Covid-19 protocols helped drive the number of cases down, and the figure even dropped to zero in the week beginning April 19.

Crowds returning is clearly a major positive, but there are fears that some of the relentless online abuse directed at footballers throughout the season will spill over into the grounds themselves.

So what of the actual football?

The relentless nature of the season meant in its early stages it was deeply unpredictable, and fatigue clearly affected the quality of the games.

Liverpool’s championship defence was hampered early on by a season-ending injury for star centre-back Virgil Van Dijk, while at the other end of the table there were indications of a gap opening up.

Two of last season’s relegated clubs – Norwich and Watford – secured the automatic promotion places – while West Brom and Fulham have made instant returns to the Championship.

The EFL has argued for “outdated” parachute payments given to relegated clubs to be abolished, and said the Government should have fought for a greater share of revenue for the EFL as a condition of approving the Premier League’s new TV deal.

So far the Premier League’s collective model has held up, under unprecedented strain, and its chief executive Richard Masters ended the season in optimistic mood.

“The adversity everybody has experienced this season – asking clubs and players to play this truncated season, all the fixture pile-up issues throughout the season and the stress and strain on players – has been very difficult to deal with,” he said on the day the television deal was renewed.

“But in the end, everybody has stepped forward and stepped up and, made it happen.”