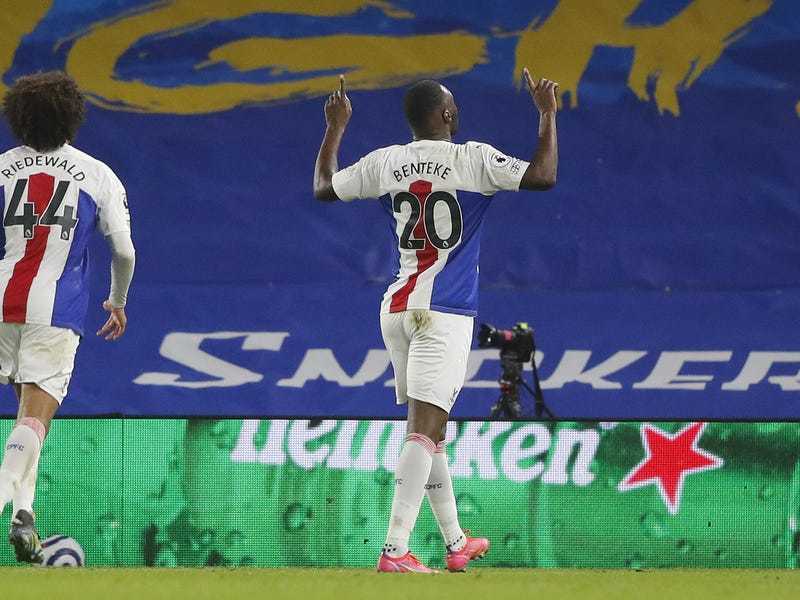 The Belgium striker lashed in Andros Townsend’s cross in the fifth minute of added time to return Palace to winning ways following successive defeats which had led to growing supporter unrest.

Brighton dominated proceedings at the Amex Stadium and levelled through Joel Veltman after the Eagles led at half-time courtesy of a superb, back-heeled finished from French forward Jean-Philippe Mateta.

Palace showed little ambition for much of the match and once again struggled to create in the absence of injured talisman Wilfried Zaha, with the two superb goals their only attempts on target.

Yet Eagles manager Roy Hodgson will be more than satisfied with a result which moves his side 10 points above the relegation zone.

Defeat for the hosts halts their club-record Premier League unbeaten run at six games, while scuppering their hopes of leapfrogging their fiercest foes for the first time this season.

Graham Potter’s men remain just four points clear of the bottom three after failing to capitalise on their superiority.

Hodgson, who is out of contract in the summer, urged supporters to be “careful” what they wished for in the build-up to the game after a banner questioning the club’s vision was briefly displayed outside their training ground.

Once again without star man Zaha, who has scored seven career goals against the Seagulls, the former England manager made five changes following the dismal 3-0 home defeat to Burnley, including handing a second start to Mateta and dropping Benteke to the bench.

After being released on the right by a searching pass from Cheikhou Kouyate, Jordan Ayew delivered a low cross, allowing Mateta to claim his first Eagles goal by holding off Ben White and producing a sublime finish on the turn.

The delightful counter-attacking opener came totally against the run of play and lit up a cagey opening period devoid of meaningful chances.

Unchanged Albion, buoyed by recent wins over Leeds, Tottenham and champions Liverpool, monopolised the ball, although they were struggling to create and failed to test Palace goalkeeper Vicente Guaita.

Palace had beaten Brighton 1-0 last February in the final match played at the Amex Stadium before the initial nationwide lockdown.

Any hopes of repeating that exact scoreline were extinguished within 10 minutes of the restart as the introduction of half-time substitute Danny Welbeck had the desired effect.

The former England forward directed a presentable early chance off target before being heavily involved in the leveller.

Pascal Gross’ scuffed shot from distance was blocked by Palace defender Tyrick Mitchell as he battled with Welbeck inside the box and the loose ball fell kindly for Holland defender Veltman to sweep his first Seagulls goal into the bottom right corner.

Palace continued to offer very little from an attacking perspective and were inviting pressure.

The chances continued to come and go, with substitute Adam Lallana twice firing over.

Albion had snatched a deserved point at Selhurst Park in October courtesy of a last-minute equaliser in a 1-1 draw and looked like they would have to be content with a similar outcome here.

But once again there was to be a twist, this time in Palace’s favour.

Townsend was given too much space on the left wing and, despite his cross initially appearing too high, it dropped perfectly for the unmarked Benteke to thunder the ball back across into the far corner.

The late drama sparked jubilation on the Palace bench, while leaving frustrated Brighton – who had 25 shots to their opponents’ three – to lick their wounds.