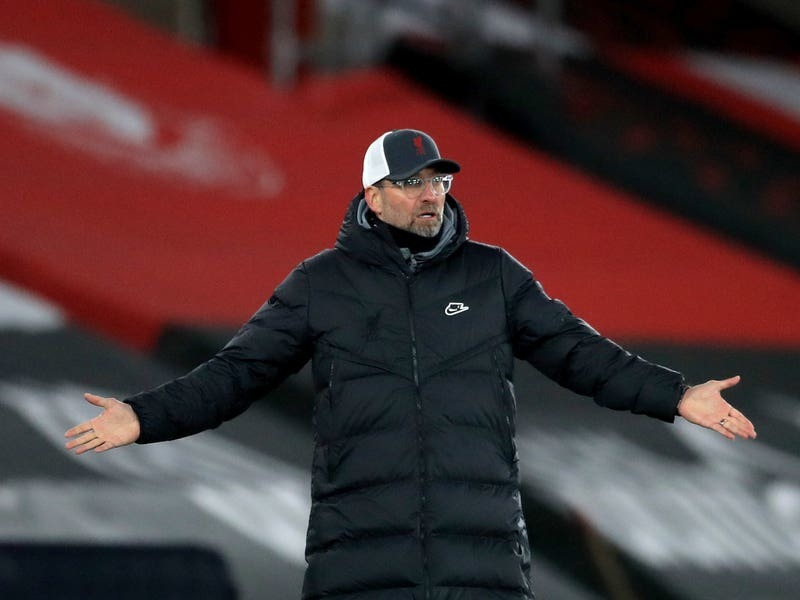 Liverpool manager Jurgen Klopp believes the debate over their current form illustrates what a “crazy place” the world has become.

The Reds have not won in their last four Premier League matches and three games without a goal is their worst run since 2005.

Their current run has seen them drop from first to fourth and Klopp accepts why there is such a debate about their form but insists he has to look past it.

“The perception from outside goes really quick; people get very unhappy with the performances when the result is not there,” he said.

“I think I heard somewhere I have to rebuild this team. The world is a crazy place – not only because of the pandemic.

“No one has time any more and in football we know that. You only get time if you always make steps forward.

“In the moment, after last season, it is clear we didn’t make steps forward and we know that and we want to change that but we change it by playing not by talking.

“We think about a lot of stuff and most of the things the public think about we think about as well – but not all of them – and for sure we have to be calm in this situation.

“I saw a lot of good signs in the Man United game (Sunday’s goalless draw) and if we had won that game everyone would have seen then but because we didn’t win no one was interested. That doesn’t change my view.”

Much of the focus during their run of results and lack of goals has been on Liverpool’s front three of Mohamed Salah – still the Premier League’s leading scorer this season – Sadio Mane and Roberto Firmino.

The latter, who missed their best chances against United, has come in for the most scrutiny but Klopp, who said his star forwards were not suffering from fatigue, stressed there was a collective responsibility within the team.

And he rejected suggestions teams had now worked out his side and devised successful plans to combat them.

“(John) Stones a week ago scored his first goal for City and in the next game he scored twice. You cannot explain that.

“The calmer you stay, while staying greedy, making good decisions, the earlier this situation will change.

“Pretty much all the teams have had a dip here or there. Some have sorted it already, some are on the way to sort it.

“It’s not that teams now defend against us with all they have – we know that for a while and it’s not new.

“In the moment we have an offensive ‘crisis’ the next headline will be everyone knows how to deal with us. That’s completely normal. It’s the situation we are in, things change overnight.”

Klopp could be boosted by the return of centre-back Joel Matip after a four-game absence with a groin problem.

He will, however, have to wait for reinforcements for his forward line in the shape of Diogo Jota, who has been sidelined for six weeks with a knee injury.

“Joel is in full training. Now we have to make a decision and we will see how that will be until tomorrow. Yesterday he trained completely normally,” said the Reds boss.

“Diogo is still a few weeks away, I don’t know exactly how long but it will not be in the next one or two weeks. He needs time, the injury needs time.”