AIRCRAFT are to use new – more direct – routes when flying in and out of Jersey Airport in an effort to improve efficiency and reduce emissions.

Seventeen departure and arrival routes have been reviewed by Ports of Jersey’s Air Navigation Services and the changes are expected to be introduced next year.

It will result in aircraft spending less time flying over the Island when taking off or landing.

The changes are being implemented as part of Ports’ Planet and People Plan, which commits the organisation to playing a leading role in developing a sustainable future for the Island.

The new procedures for Standard Instrument Departures (SIDs) and Standard Instrument Arrivals (STARs) – specific paths that aircraft follow when departing from, or arriving in, Jersey and when linking up with the wider airspace – will make use of modern, satellite-based navigational aids, which allow more direct routing.

This is more efficient than traditional procedures, which rely on navigational aids on the ground that can often be overflown by aircraft, potentially adding unnecessary mileage and noise disturbance. 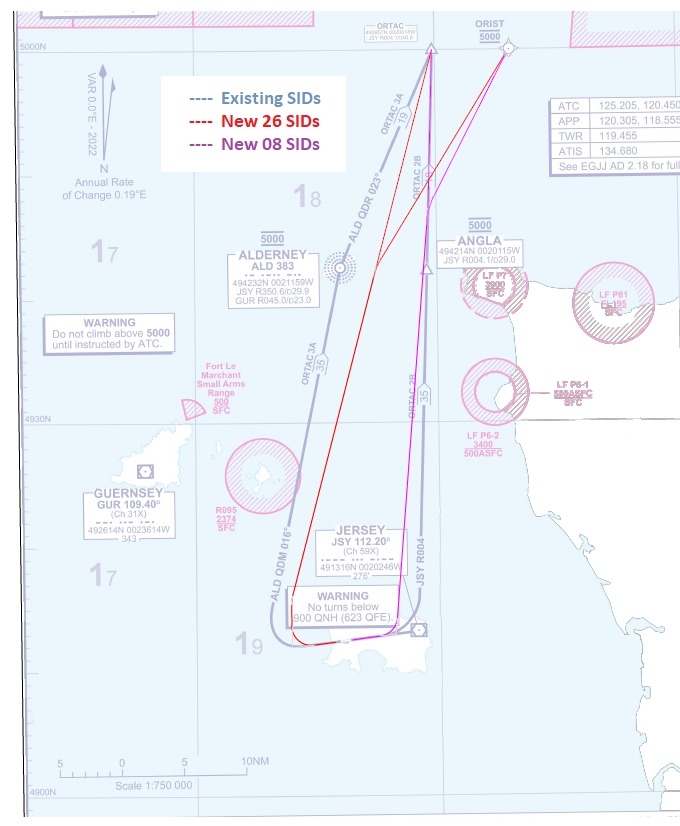 ‘The new STARs will seamlessly link into the instrument approach procedures, bringing greater predictability for both controllers and pilots. The STARs will also help with approach planning, making better use of modern aircraft equipment.

‘For pilots, these changes should reduce their cockpit workload and give predictability to routings and their climb and descent profiles. The more efficient climb and continuous descent operations will reduce fuel consumption, CO2 emissions and noise, all of which are important to today’s airlines. Our estimates show that one of our operators could save approximately 1.5% in fuel costs with these new procedures.’

Mike Stephens, air traffic controller and Jersey ATC sustainability manager, said that the reduction in miles flown would contribute towards the Ports’ Planet and People Plan.

‘Ports of Jersey is committed to supporting our business partners to reduce their carbon emissions, while also promoting sustainable travel for our community.

‘Providing connectivity to the Island, we work closely with our airline partners to operate newer, quieter, higher performance, and more efficient aircraft.

‘These new procedures will reduce the track distances flown by aircraft in and out of Jersey Airport and enable more fuel-efficient climb and descent profiles. This will reduce environmental impacts like noise and CO2 emissions.’

Work will be completed this year to validate the new routings, which are then expected to be implemented early next year.