Call to Islanders to join ‘living’ flag for Ukraine

ISLANDERS will come together to form a ‘living’ Ukrainian flag in St Ouen’s Bay next month – in the first of a series of fundraisers to help those affected by the war.

The event, which is due to take place on Sunday 21 August on the beach at Le Braye, will see participants wear blue-and-yellow clothing to create the flag, which will then be photographed from the air by a drone.

It will mark the start of Jersey’s Ukraine Week, a series of activities – including a blue-and-yellow-tie dinner, an auction and a Ukrainian market – to raise funds for the Bailiff’s Ukraine Appeal through humanitarian charity Jersey Side by Side. Islanders are also being encouraged to organise their own fundraising events in pubs, workplaces or at home during the period.

Michel Le Troquer, the charity’s chairman, said: ‘We wanted to start Jersey’s Ukraine Week with a show of solidarity with the people of the war-torn country and what better way to do this than by gathering as many Islanders as we can to recreate the country’s distinctive flag.’

He added: ‘We hope the image will be used online, and in the media, as far and wide as possible, as a pictorial representation of the Island of Jersey’s unwavering support for the people affected by this barbaric war.’

A ‘Living Flag at the Beach – Ukraine Week’ Facebook page has been set up and blue and yellow clothing can be purchased from local charity shops, such as the Salvation Army, which have been made aware of the initiative. 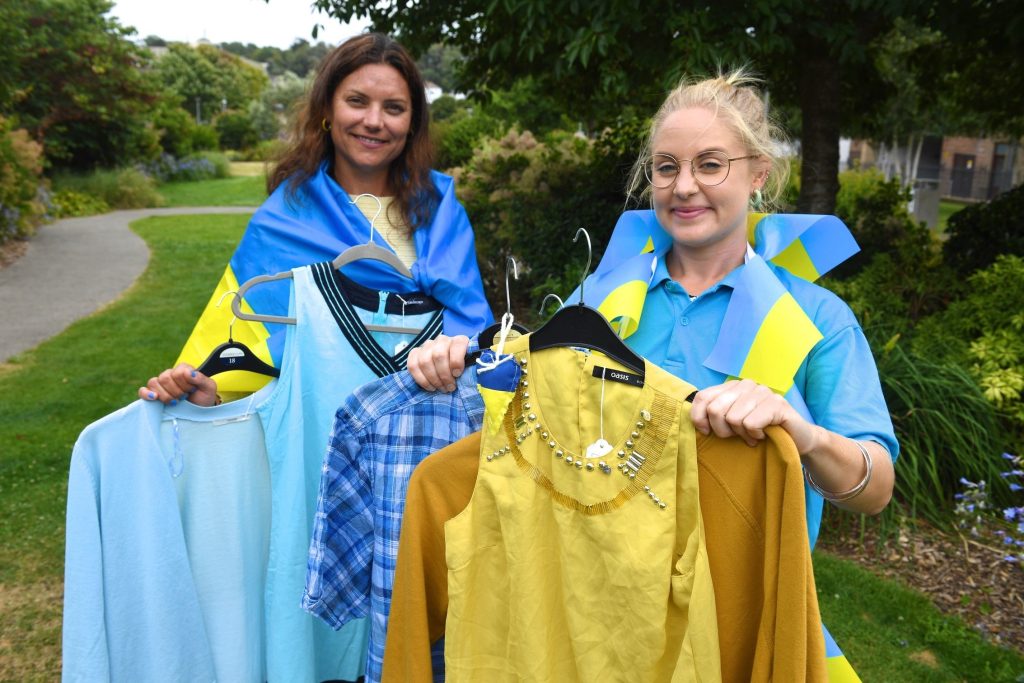 Charity shops will be selling blue and yellow clothing

Islanders taking part in the event are being asked to arrive at 10am with the drone shot due to be taken at 10.30am. There will also be a live mine-clearance demonstration by Friends of Ukraine – EOD, a charity which Jersey pledged funding to earlier this year.

The list of public events for Ukraine Week can be viewed online at sidebyside.je/ukraineweek and a fundraising pack is now available to download for anyone wishing to organise their own activities.

The money raised for the Bailiff’s Ukraine Appeal will be distributed to vetted charities operating inside Ukraine by Jersey Overseas Aid, which has overseen the allocation of more than £2.3m in humanitarian aid backing a variety of initiatives in the region – including the provision of trauma kits, portable baby incubators and other medical equipment and supplies.

Also:
Join JEP Photographer Dave Ferguson at the Water Splash on August 6th in raising money for those affected by the ongoing hostilities in Ukraine, in partnership with charity Jersey Side by Side.
Family fun at the Water Splash from 12pm with all-day DJs, face painting plus the annual KOOKSLAM contest. The after-party kicks off 10pm – 2am.
Funds will go towards humanitarian aid such as psychosocial support, mine clearance training and baby incubators.