A PAINTING by Jersey artist Edmund Blampied and a rare 1912 aviation poster relating to the first plane landing in the Island are being auctioned in Guernsey next week.

The painting, titled The Vicar Loses his Bishop, is a relatively small oil-on-board and was first shown at the Royal Society of British Artists Summer Exhibition in 1939, priced 60 guineas.

Blampied was known for his humorous characterisations of people in various settings, in Jersey and elsewhere.

The Vicar Loses his Bishop was rendered in oils sometime after the same characters and scene appeared as an illustration as one of a series of studies, Leaves From Life, published by Blampied in the Illustrated London News in September 1933. The work is estimated to fetch between £15,000 and £20,000.

‘The painting is one of the best- loved and most-important oils by Edmund Blampied, painted shortly after his return to Jersey in 1938 and before war was declared in September 1939,’ said Jonathan Voak, Jersey representative for Martel Maides Auctions.

‘The poster will certainly attract the attention of anyone interested in the history of aviation in Jersey.

‘It is an exceptionally rare original poster advertising the air show from which the first aircraft to land in Jersey took off on 26 August 1912,’ he said.

‘I think the two pictures will be of special interest to Islanders.’ 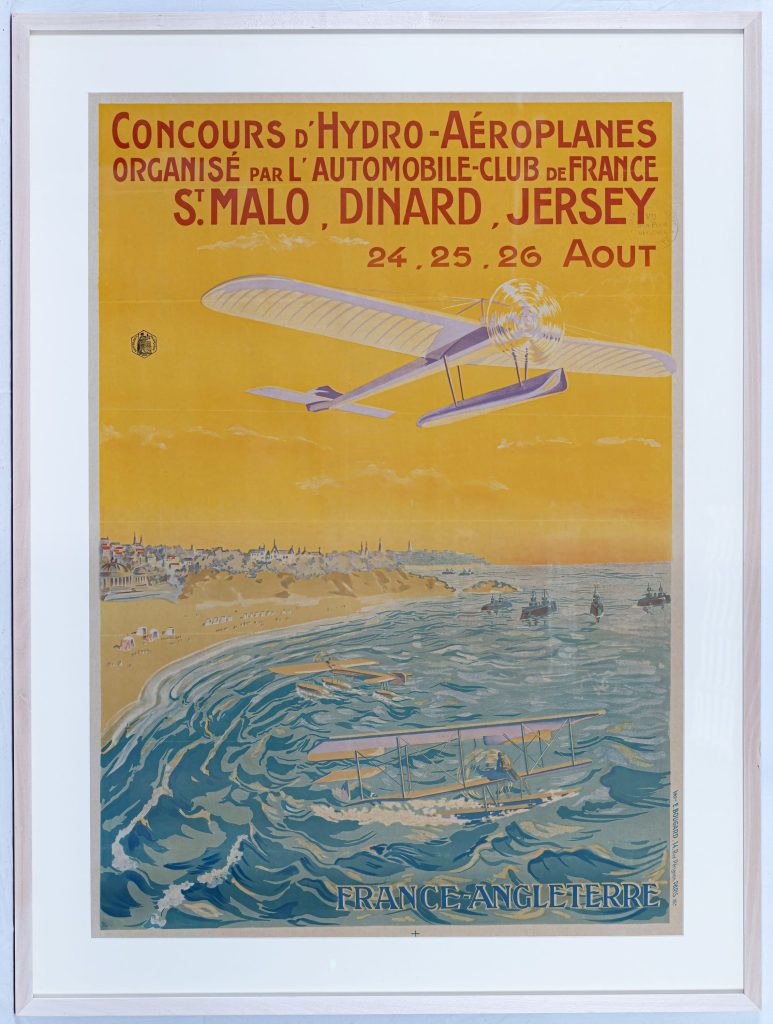 The poster depicts early hydro-aeroplanes in action on the water and in the air above St Malo, during a race which was the grand finale of a three-day festival of flight organised by the French automobile club – which also saw the first landing of a plane in Jersey.

The sea planes taking part in the race followed a 90-mile circular sea route between St Malo and Jersey.

Of the five sea planes that entered the competition, one failed to take off but the other four reached the refuelling point in St Aubin’s Bay.

The winner was Charles Weymann, an American aviator who had a close race with the Frenchman René Labouret on the return leg.

The works will be offered at Martel Maides Auctions at their spring fine art, antiques and jewellery auction in their sale rooms at 40 Cornet Street, St Peter Port, from next Tuesday to Friday 8 July. For further information visit martelmaidesauctions.com.