A JEWISH woman saved from advancing German forces by members of the St Helier Yacht Club 82 years ago has praised the ‘valiant spirit’ of the Islanders who rescued her.

It was an emotional weekend for Irène Probstein (91), from Brookline, Massachusetts, who unveiled a commemorative plaque recognising the club’s wartime mission to evacuate British soldiers from St Malo on 16 June 1940.

On Saturday, Mrs Probstein visited the French slipway from which, as a nine-year-old child, she boarded the Callou – a motor yacht owned by the Langlois family of Sion Hall Farm at Longueville – and fled as the advancing German army entered the port.

It was the first time she had returned to the spot since making her escape with her mother, Claire, and brothers, Sylvain and Irwin Weindling.

Although the area had changed significantly over the past eight decades, Mrs Probstein told the JEP that ‘just to set foot there again was something very meaningful’.

‘I cannot tell you that the slip was familiar, because when I saw it [as a child] it was full of smoke and it was such a chaotic scene – you had the feeling that things were not where they should be.

‘I never thought I would see the place again – we left under such dreadful circumstances and the idea was to get away and get away really quick,’ she added. 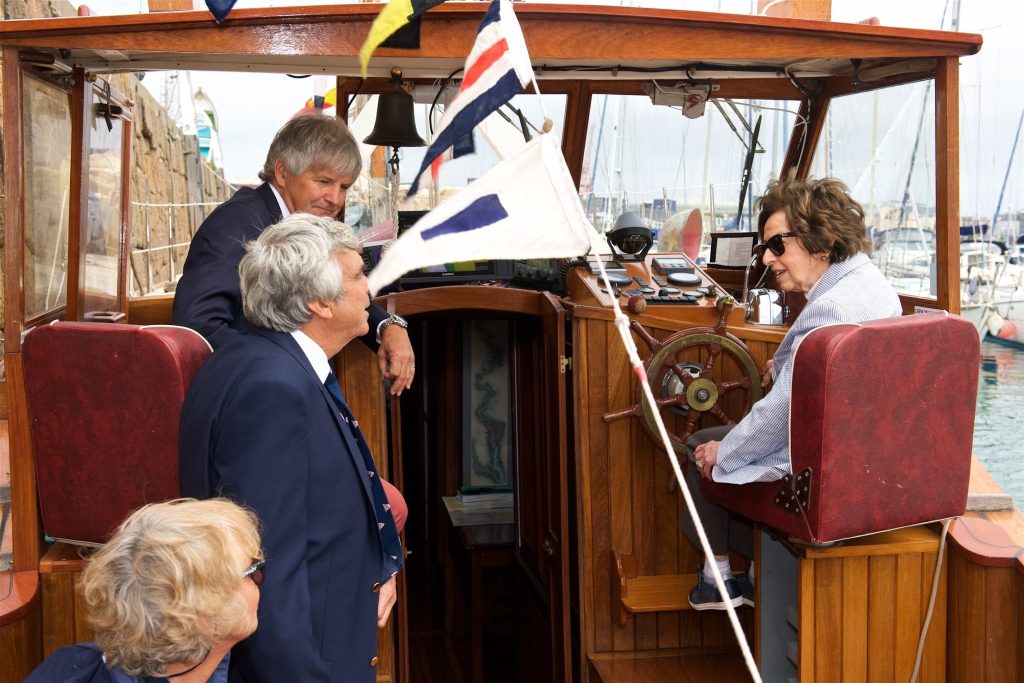 On Sunday, after an Island tour, Mrs Probstein also visited the Langlois family farm where she enjoyed afternoon tea and met the descendants of those who showed her ‘extraordinary sympathy and hospitality’ all those years ago.

‘Now that was emotional – when I stepped off the minibus I thought to myself, “Oh this is emotional I don’t know if I can do this”,’ she said, adding that she had received an ‘unbelievable’ reception since arriving in the Island.

‘I mean it was really overwhelming – my family is absolutely overwhelmed and they had such a good time. I wanted [them], especially my grandchildren, to know the story and to show them where all this happened and show them how good people can be.’

Unveiling a plaque at the St Helier Yacht Club, she praised the ‘brave hearts’ and ‘valiant spirit’ of the Langlois family and their boat, ‘which snatched us from the calamity of the German army and brought us to the safety and warm reception of Sion Hall’.

The Langlois family also paid for them to take a ferry to England – and they caught the last boat to sail to Southampton before the start of the Occupation.

‘It is so important to recognise the goodness that resides in the human heart of certain individuals and which is so hard to come by at times of great distress. These wonderful examples give us hope for a better world and we celebrate it with all our hearts,’ Mrs Probstein added.

She was also presented with the defaced red ensign, originally awarded to the club as a battle honour in recognition of its efforts in 1940.