PICTURES: Hundreds line up for a feast fit for the Queen

GROANING under the weight of scones, cream, assorted cakes, Coronation chicken sandwiches and Bakewell tarts, the table stretched as far as the eye could see…

Around 400 people attended the High Tea on the High Street event in St Helier yesterday, marking the final day of celebrations for the Platinum Jubilee of Queen Elizabeth II.

Tickets for the event, which cost £10 each, sold out within 16 hours, and those who had been quick enough to get one made sure they were in their seats in time for the 2pm start.

There was relief that, despite some mixed weather during the four-day Jubilee party, organisers were able to set up and start the event in warm, dry conditions – no party is enhanced by soggy sandwiches. 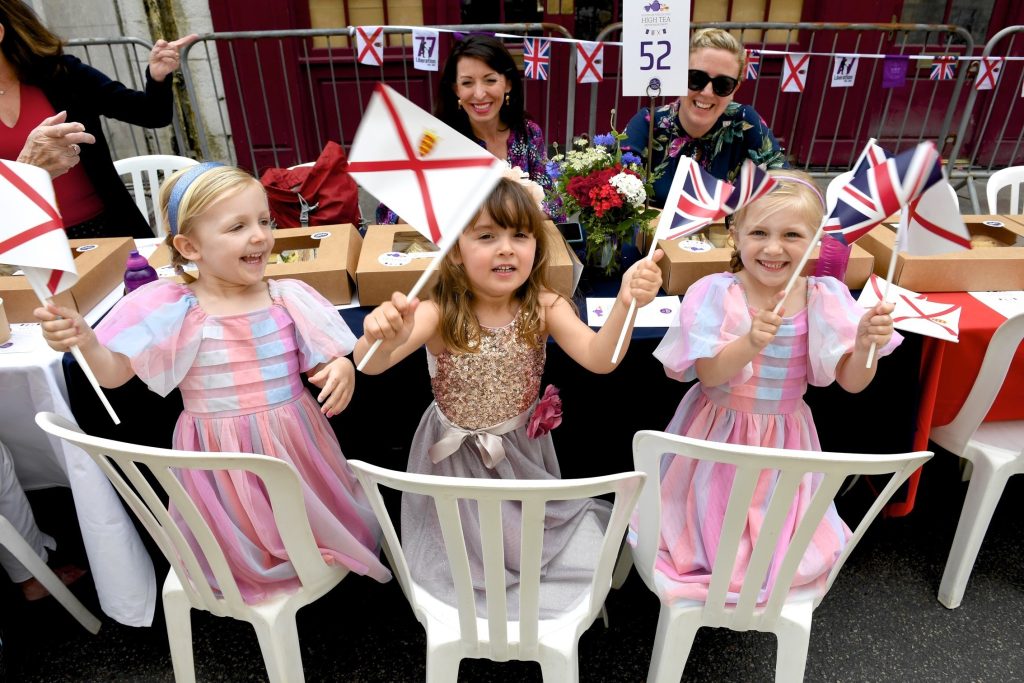 Caterer Tony Sergeant, of Jersey Kitchen, said baking had begun on Friday, followed by a 7am start yesterday to ensure 400 rounds of sandwiches were in optimum condition.

Attendees were from across the age spectrum, showing that virtually no one is too young, or too old, to enjoy an afternoon tea, with a mix of locals and visitors.

David Lindblad, who lives in Jersey but comes from Sweden, was able to start the first phase of a double celebration with his wife Nina and three-year-old son Axel.

He said: ‘We have the Swedish National Day on 6 June, so tomorrow we will toast our King, and today the celebrations are for your Queen.’

Mr Lindblad said that after being forced inside during a barbecue the previous day, he was pleased to see dry conditions, and was impressed that there was even a gluten-free option – truly an inclusive occasion. 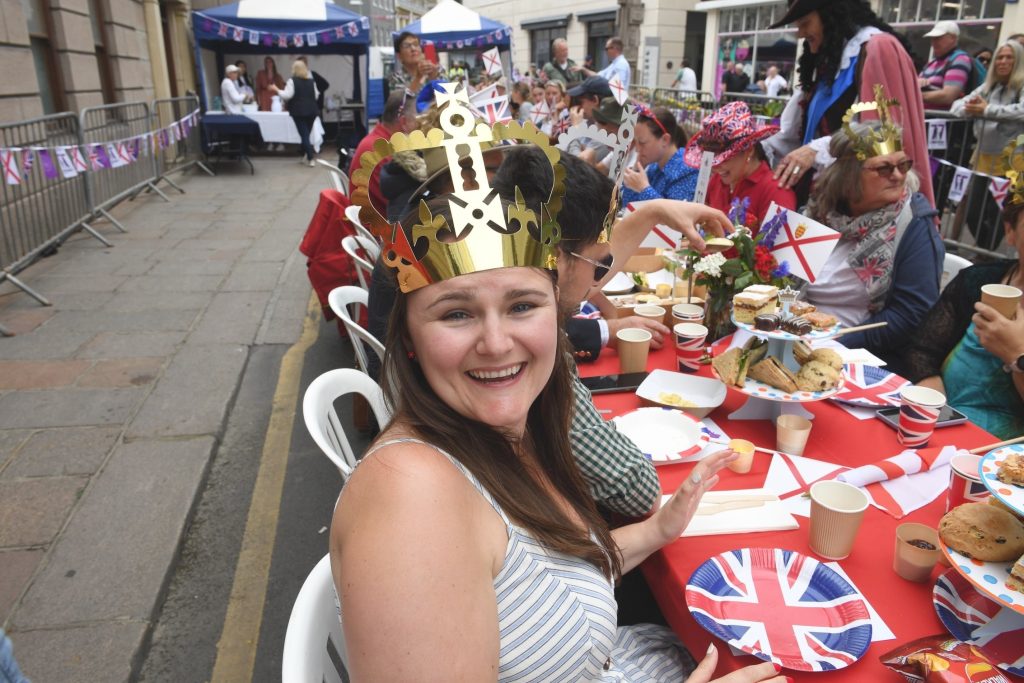 Lucy Osborne, an Islander living in England, was part of a group including her mother Jane and sister Issie at the end of a weekend of Jubilee-themed hen party celebrations ahead of Lucy’s wedding next month.

‘We’ve been to the Ecréhous, the Escape Room, and on a tour around the “hedge-veg” stalls, so we thought this would be a good way to finish off,’ she said.

In spite of being in Jersey for the past 18 years, Nat Snook – who hails from Zimbabwe – and his wife Linda had sensed the need to do some ‘homework’ on the Queen ahead of the Jubilee. 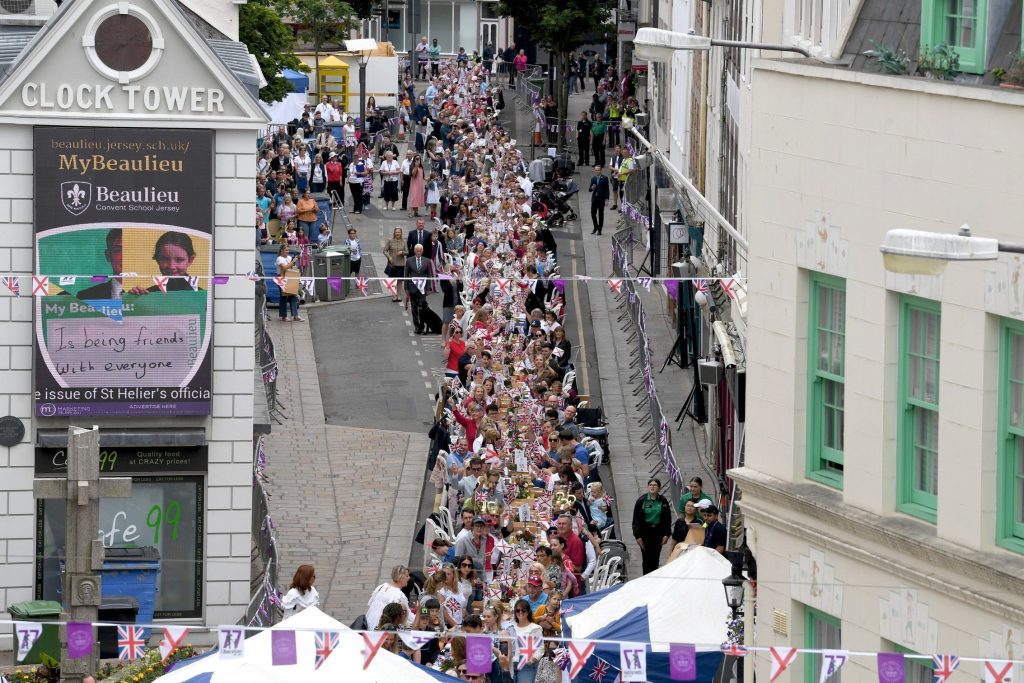 This involved reading the newly-published book There Once is a Queen, by Sir Michael Morpurgo, with children Lana (6) and nine-year-old Ethan, leaving the family fully up to speed on all things Royal Family in time for the tea. 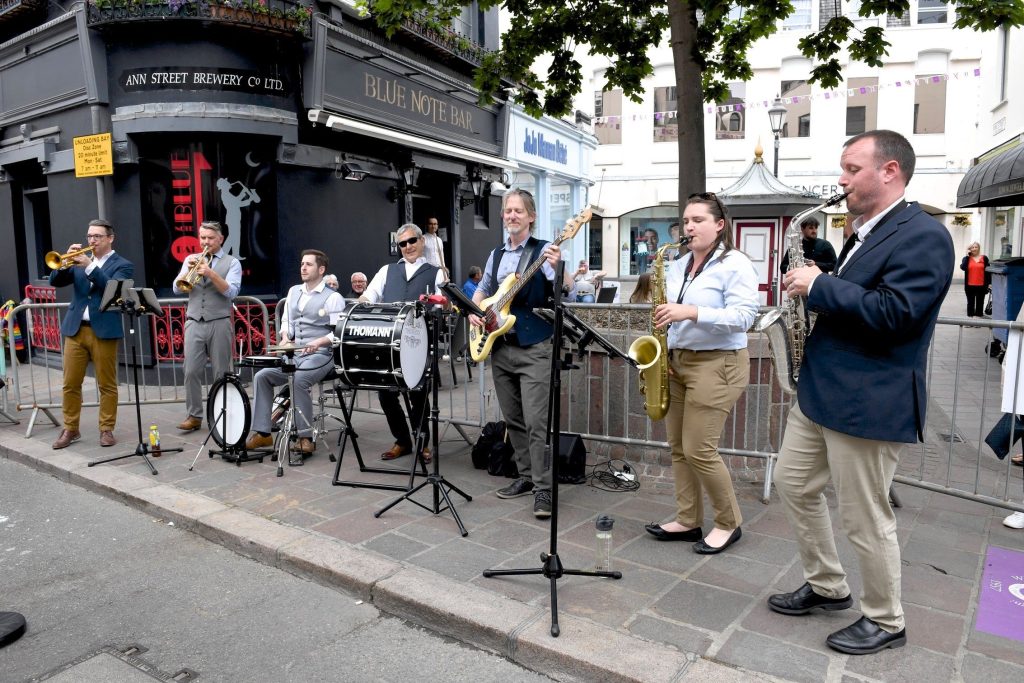 The formalities were brief, with an opening rendition of God Save The Queen, followed by three cheers. Her Majesty was present through her representative in the Island, the Lieutenant-Governor, Air Chief Marshal Sir Stephen Dalton, who took part in a walkabout with Lady Dalton and Archie the labrador.