Deputy Inna Gardiner said that along with having no playing field, First Tower School had small playgrounds, limited parking and very limited green space in the immediate area of the school, which is located in an ‘exceedingly densely populated’ catchment area.

Deputy Gardiner wants £150,000 earmarked in the proposed Government Plan to start work on the project for the ‘vibrant, inclusive school’, and has lodged an amendment to do so. The funds would go towards a business case, purchasing a nearby field and a full feasibility study.

The field, on the corner of Bellozanne Road and Tower Road, had already been safeguarded for educational use in the 2011 Island Plan, she said, and remains safeguarded under the Draft Bridging Island Plan.

‘This development will create multiple opportunities for the pupils to learn outdoors, to exercise, to be sociable and to play,’ said Deputy Gardiner, in her report.

Deputy Gardiner added: ‘There is equally an opportunity for the school field to become a “community field” allowing additional extracurricular activities for pupils but also the community at large. 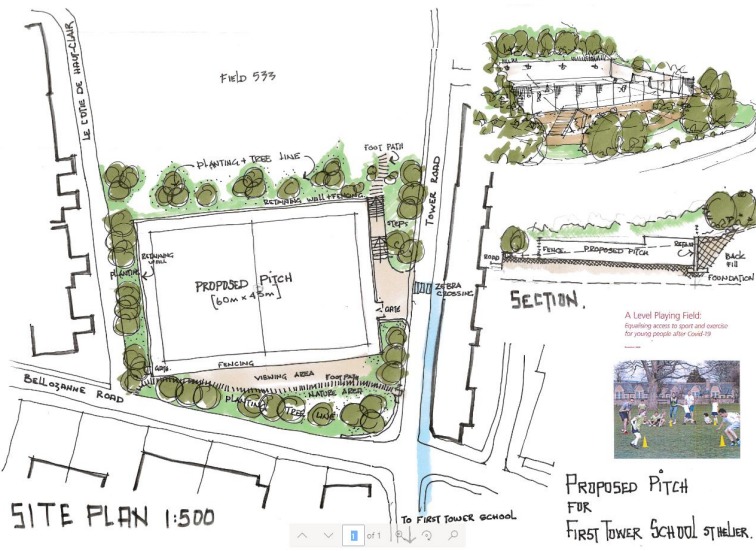 ‘The school can share resources with the community which would be a major benefit in this area of St Helier where there are currently limited options for pupils, staff and families.’

First Tower School draws children ‘from a wide range of socio-economic and multicultural backgrounds’, said Deputy Gardiner, adding: ‘The catchment is changing to become more vulnerable and challenging in its needs.’

Despite difficulties, she said the school was ‘driven by an enthusiasm and desire to achieve’, raised money for charity and endeavoured to be a ‘supportive facility in the community’.

A large proportion of pupils live in flats with no gardens, according to the Deputy, who said this had been observed through nursery home visits. Her amendment added that 10% of First Tower pupils had also been identified as having special educational needs.

The ‘inclusive community school’ is also one of the most diverse in the Island, with 42% of children having English as an additional language, of which 47% are Portuguese and 29% Polish, according to Deputy Gardiner.

She has urged States Members to support her amendment at a debate on 14 December, which would ‘fully explore the options for this much-needed development’.