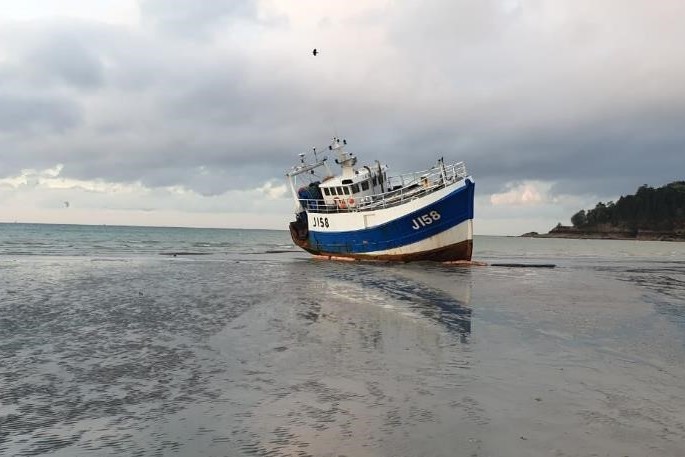 L’Ecume II, one of the largest vessels in the Island’s fleet, had been at sea for 42 hours when the incident occurred. The two-man crew had been unable to rest after offloading their catch in the port of Granville, as authorities had requested the boat move on immediately owing to Covid rules.

Ports of Jersey, which carried out the inquiry, also found that the 66-tonne vessel was not fitted with a ‘bridge navigational watch alert system’ which would have forced the deckhand at the helm to acknowledge a series of visual and audible signals. Under such a system, the skipper would be woken if this was not done. This was fitted after the incident. An echo sounder, which could have alerted the crew to a minimum water depth, was also not set.

Events began on 12 May last year when L’Ecume II left port at 7.10am to go fishing. The crew had planned to unload their catch in Granville, the first time they had been able to do so since the onset of the pandemic. The pair had been working on board the boat in port between 9am and 5pm during the four previous days. Fishing began at 9.20am around Jersey and continued until 5.20pm the next day.

At 9pm, the crew spent two hours offloading their catch in Granville and then immediately departed for St Helier. While passing east of Chausey, the deckhand took command of the vessel, telling the skipper he was sufficiently well rested to be able to do so, and the skipper went to his cabin to sleep.

The report added that, while on duty, the deck hand conducted rounds of the various rooms within the vessel, made himself a cup of tea, took two painkillers for a bad back and watched ‘a few YouTube videos’.

Investigators were told by the deckhand that his last recollection was seeing that there were 28 minutes of the journey left. His next memory was waking in the wheelhouse with the boat having run aground at Belcroute Bay.

It was estimated that between leaving St Helier and arriving in Granville, the longest period of continuous rest he had was less than 3½ hours.

Following the grounding, the skipper awoke and tried to manoeuvre the vessel back into deeper water without success. He alerted authorities to the incident, warning them that he thought the vessel might not remain upright.

With 5,000 litres of marine fuel oil on board, pollution prevention equipment was sent to the scene and an anti-pollution boom was put in place around the vessel. No pollution ensued.

Both the Fire and Rescue Service and St Helier RNLI inshore lifeboats were dispatched to the scene and the crew were evacuated from the vessel.

With the initial help of Ports of Jersey’s Halcyon workboat, just before 10am, L’Ecume II was refloated and returned to St Helier. It sustained some minor rudder damage.

During subsequent inquiries with the vessel’s skipper about why there were only two crew members on board, the skipper told investigators that there was a lack of crew available, with employment permits for those from outside the EU not being available locally.