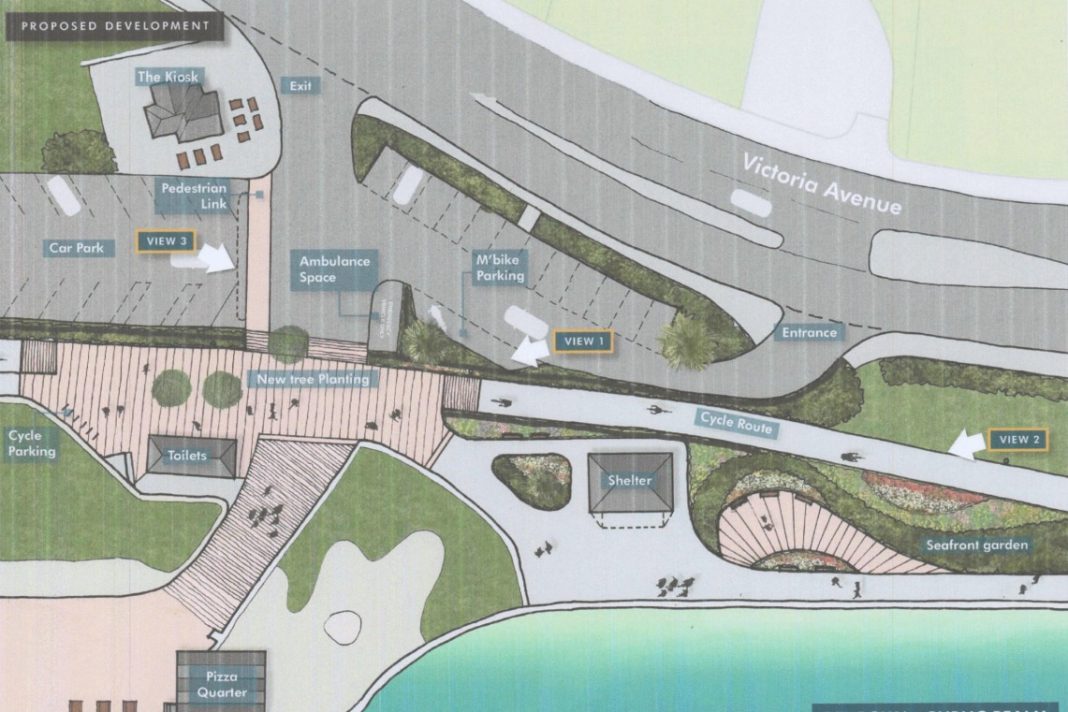 The Infrastructure, Housing and Environment Department have submitted plans to upgrade the section of the promenade at the end of Victoria Avenue where the Kiosk and Pizza Quarter are based because of a ‘number of areas of conflict’ in the area between pedestrians, cyclists and motorists.

The proposals include widening the existing cycle route in line with recommended design standards. The route from the east would also be realigned so that it fits around the rear of the existing seating shelter to keep it separate from the pedestrian path.

All existing road markings would also be removed and replaced with a ‘textured surface’ and new fencing would be put up to separate the cycle route from the car park – which would also have a single designated pedestrian access route built in from the Kiosk to the promenade.

A number of parking spaces would be lost as part of the plans, but a designated parking spot for emergency service vehicles would be built. In the design statement submitted on the Planning website, the department say: ‘Emergency services use Bel Royal as a temporary base location to respond to emergency calls for key parts of the west of the Island. The parking location adopted tends to be on the slipway, which results in restricted access to the slipway. The proposed design removes this restriction.’

Routes and spaces would be defined by strategically positioned trees.

The department conducted an online consultation earlier this year and asked Islanders to provide comments on the proposals.

More than 55% of the 190 respondents said that they liked the proposed plans for improving the area.

More than 85% of people said that they felt the area could be safer and more than 80% supported the idea of relocating the cycle track to the rear of the seating shelter.

One comment was: ‘I’ve had a number of near misses with other cyclists on the blind corner in front of the shelter, so the proposal will ease that danger zone for cyclists and pedestrians.’

Another was: ‘From a cyclist safety concern, this area has always been a concern for cyclists, pedestrians and other users. Moving the cycle path into a viewpoint area is key for everyone, as safety will be improved so much more with this design.’