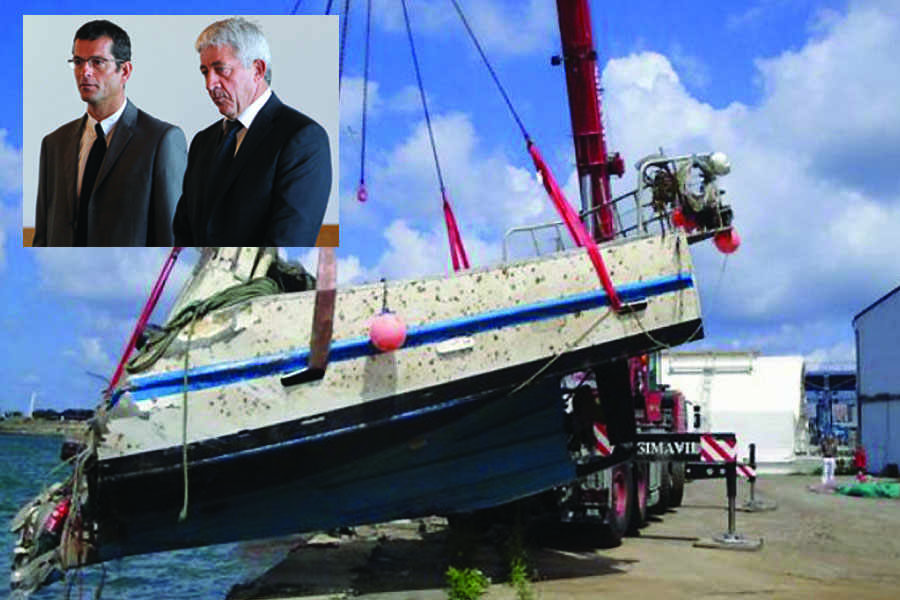 But his first officer, who failed to notice the doomed trawler on his radar screen, was cleared of all blame in Caen on Monday.

First officer Yves Tournon was exonerated of all blame for the accident which cost the life of Granville fisherman Philippe Lesaulnier when the Caen appeal court quashed his conviction.

The court upheld a suspended prison sentence imposed by a lower court in Coutances on Vitesse captain Paul Le Romancer. 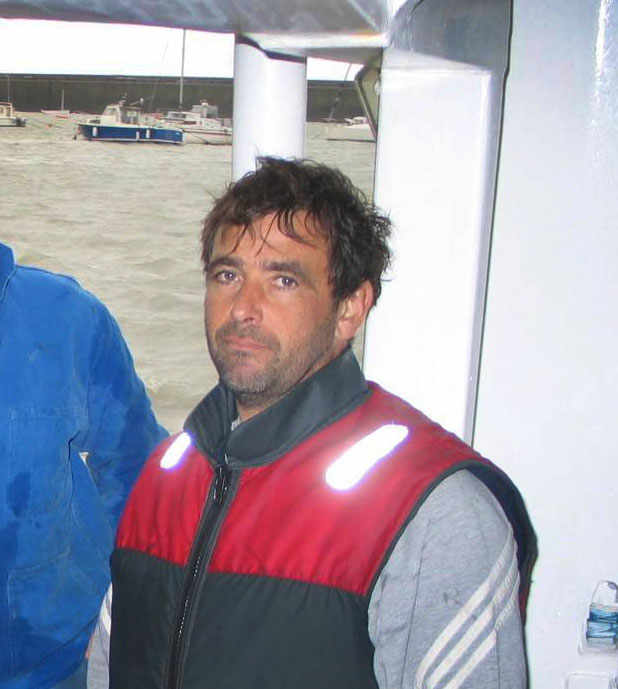 Meanwhile, Mr Lesaulnier’s widow thanked the people of Jersey for their support during the last four years, but said she was disappointed at the decision of the court.

The family now plan to pursue a case through the civil courts.

The Coutances prosecutor who had called for firm prison sentences for both officers had appealed to the higher court saying that suspended sentences were not severe enough in a case of manslaughter.

But instead of imposing more severe penalties the higher court cleared the first officer and upheld the original suspended prison sentence imposed on the master of the Vitesse.

Announcing the verdict, the Caen appeal judge said that there were doubts about Mr Tournon’s responsibility for the accident due to uncertainties as to whether the Condor Vitesse’s radar was functioning correctly on the day of the tragedy in March 2011.

Mr Lesaulnier’s widow, two of his four daughters and the owner of the ill-fated Granville trawler Les Marquises were all present in court . They said they were disheartened at the acquittal and called the court’s decision ‘an aberration’.

Widow Delphine Lesaulnier said she was ‘disheartened and deeply disappointed’. 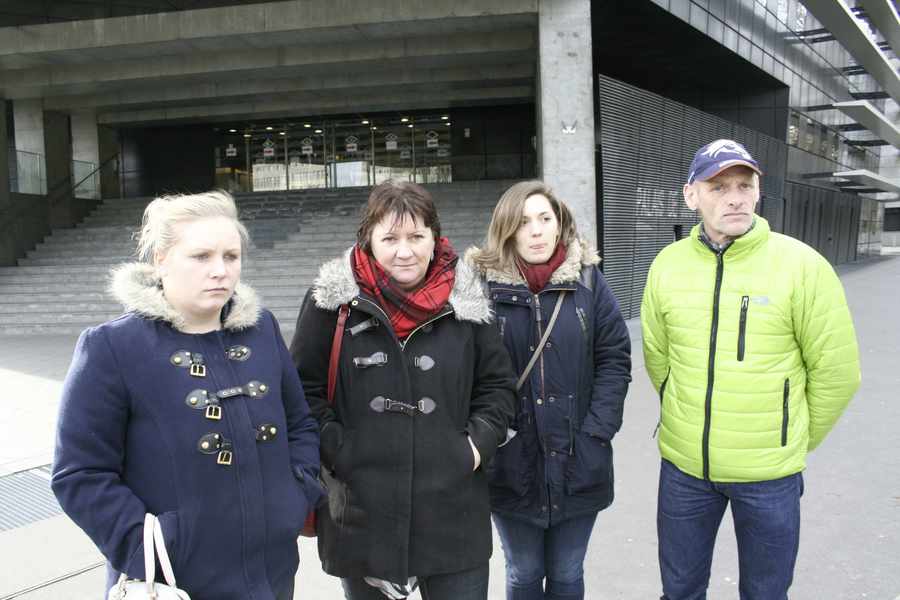 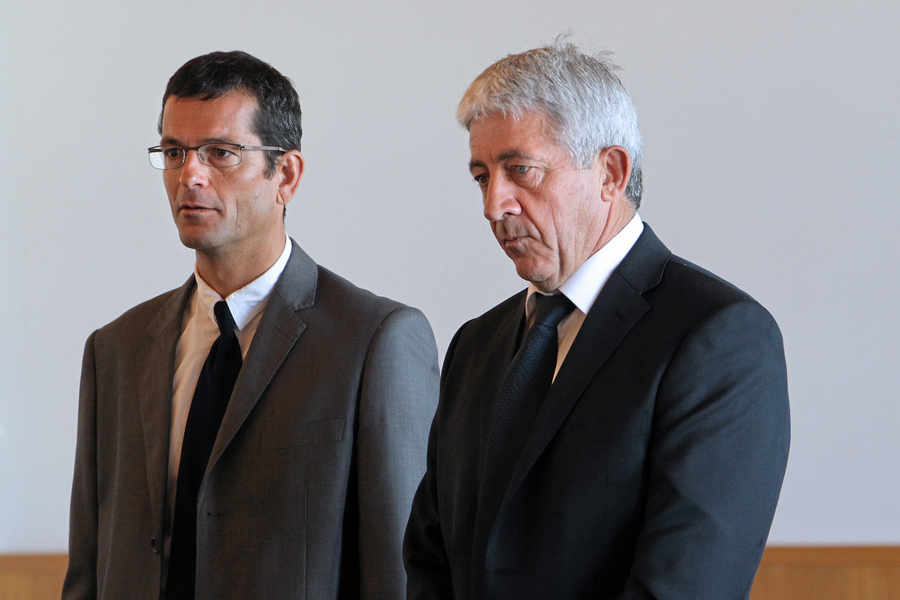 ‘We expected the captain’s suspended prison sentence to be confirmed and we were not surprised when we learnt that he won’t go to prison,’ she said.

‘He admitted his guilt and came clean about his responsibility. But we just don’t understand why the court cleared Tournon of all blame.

‘It will always be a source of deep anguish and disappointment that justice has not been done in this case.’ 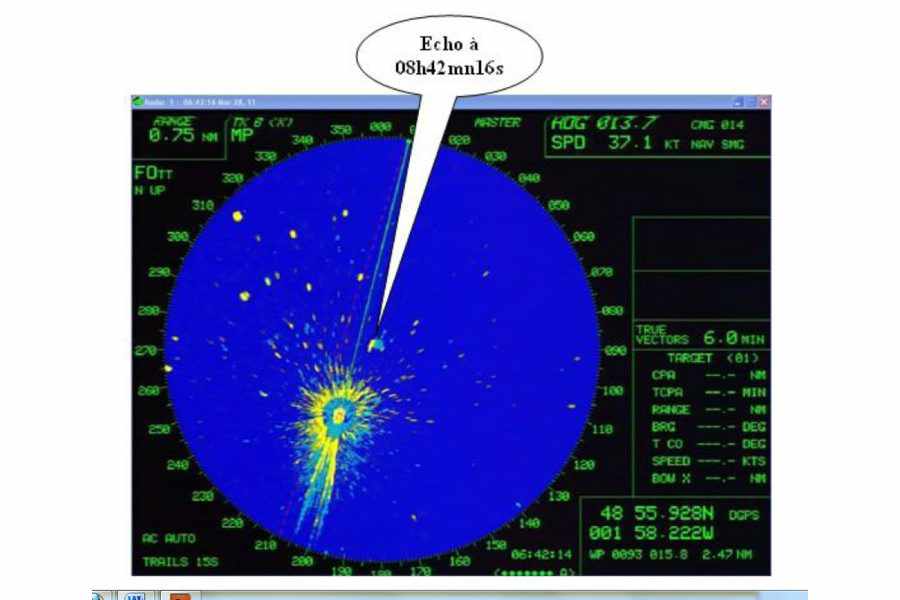 She added: ‘I would however like to send a message of thanks to the people of Jersey for the considerable support they have given us since the accident.

‘One day I hope we will find the courage to visit the Island.’

Owner of the Les Marquises, Pascal Le Guillou (51), who was on holiday at the time of the tragedy and was replaced by the Mr Lesaulnier on the boat, called French justice ‘rotten’ after hearing the verdict.

‘Delphine has lost her husband and the children have lost their father,’ he said.

Mr Lesaulnier’s daughters Pauline (20) and Audrey(24) said that they shared their mother’s deep disappointment at the court’s decision.

‘We cannot turn the page on this affair. We still have to go through the civil court case in the near future before we can say its over.’ 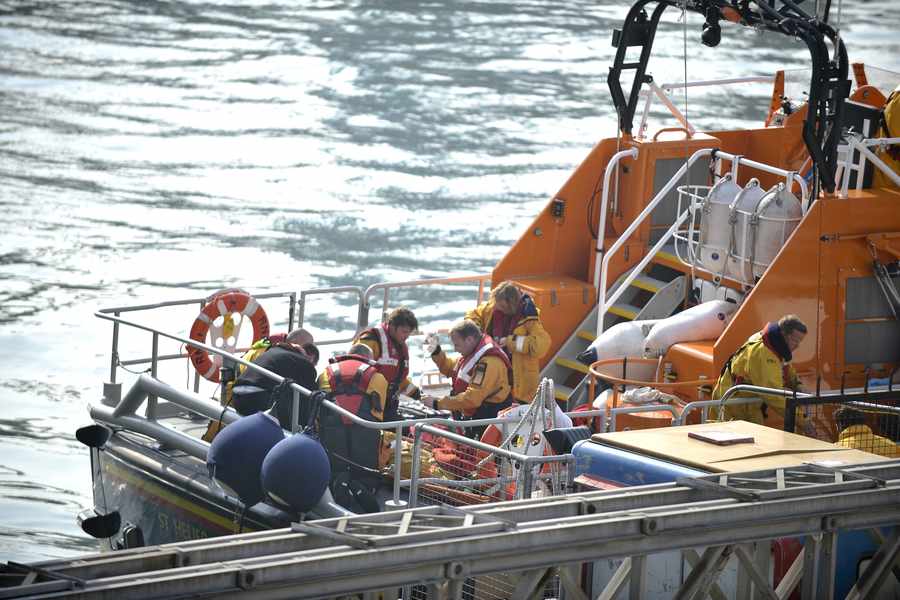 AT 8.42 am on 28 March 2011, the high-speed catamaran Condor Vitesse collided with a French fishing boat during a routine crossing from St Malo.

The impact sliced the small potting boat in half.

Its captain, 42-year-old father of four Philippe Lesaulnier, was killed instantly, while the two crew members were thrown into the water.

The crash shocked Islanders and left many wondering how a passenger ferry with a state-of- the-art radar could collide with another vessel on such a well-used route. Just over six months later, the French Accident Investigation Bureau released its findings and revealed the devastating series of events in the moments before the crash.

The Vitesse, with hundreds of passengers on board, left the port of St Malo for a crossing to Jersey at 7.55 am. By that time, the fishing boat, Les Marquises, had been on the water for more than four hours, dropping pots around the Chausey and Minquiers reefs.

Despite the warm and sunny conditions on land, a large area of thick fog had formed over the sea – leaving both vessels operating in extremely poor visibility.

At 8.41 am, a blip of the French potter appeared on Vitesse’s radar, although evidence suggests that it was not noticed by the ferry’s crew.

The bureau’s investigators found that, despite the poor visibility, the crew were chatting casually about TV, with the captain informing his colleagues that he was tired, as he had stayed up late watching Catwoman. (see below)

And the bureau ruled that the Condor – cruising at almost 37 knots – was travelling too fast, given the poor visibility.

Radar images included in the report showed how the Condor closed down on the fishing boat as it dropped its tenth pot of the morning. 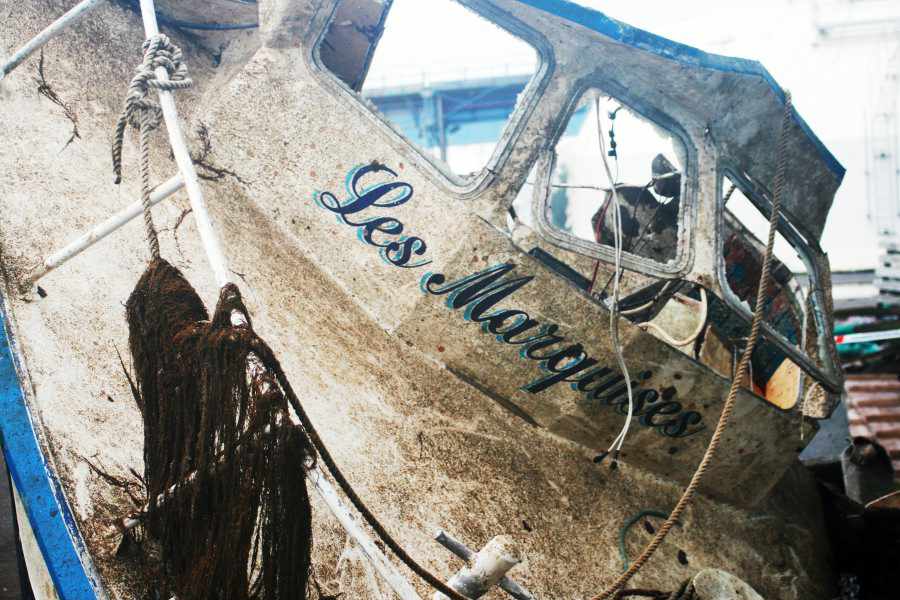 The report stated: ‘Just before the collision, on board the potter, the hand busy with the pot shooting suddenly heard an engine roaring very close and alerted his workmate… realising the danger, he faced the bow and shouted to the skipper “full astern, full astern”.

‘He wanted to rush to the wheelhouse, but he suddenly recoiled when he saw on the port side, appearing very fast out of the fog, a vessel.

‘He distinguished the inscription “Condor” on the hull.’ In the chaos of the moments shortly after the impact, the Vitesse’s then 56-year-old French captain, Paul Le Romancer, told passengers they had collided with an object, which was possibly a ‘little piece of wood’.

He only realised the magnitude of what had happened when a passenger told the crew he had seen the ferry collide with a fishing boat.

The Vitesse stopped and deployed its own lifeboat and found the two Les Marquises crew members clinging to the wreckage of their sinking boat. 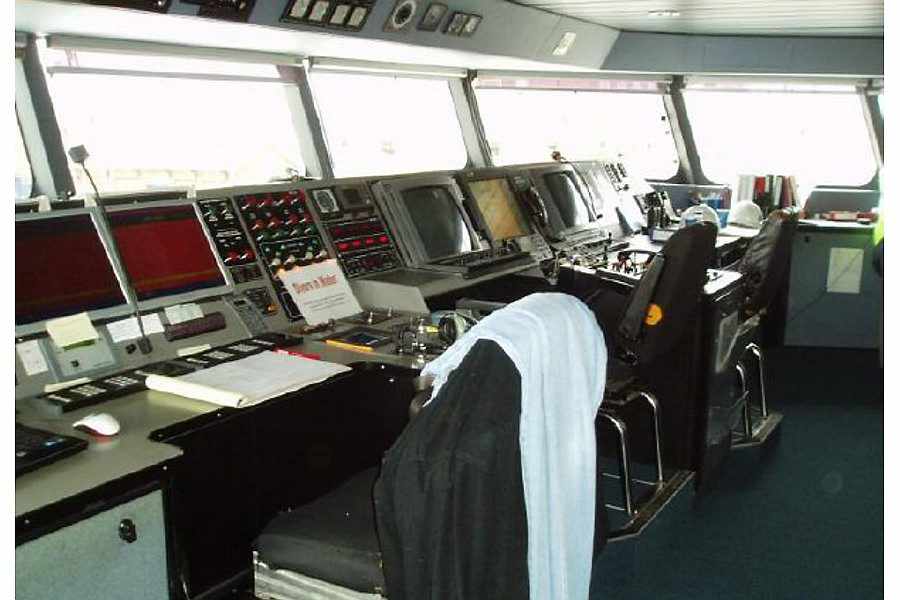 08.28.07 am CAPTAIN: Yesterday evening I watched Catwoman on the TV. I’m an idiot because after that I slept very badly.

08.28.18 CAPTAIN: She was jumping from everywhere like a cat. She is very beautiful. She was wearing a sexy outfit. 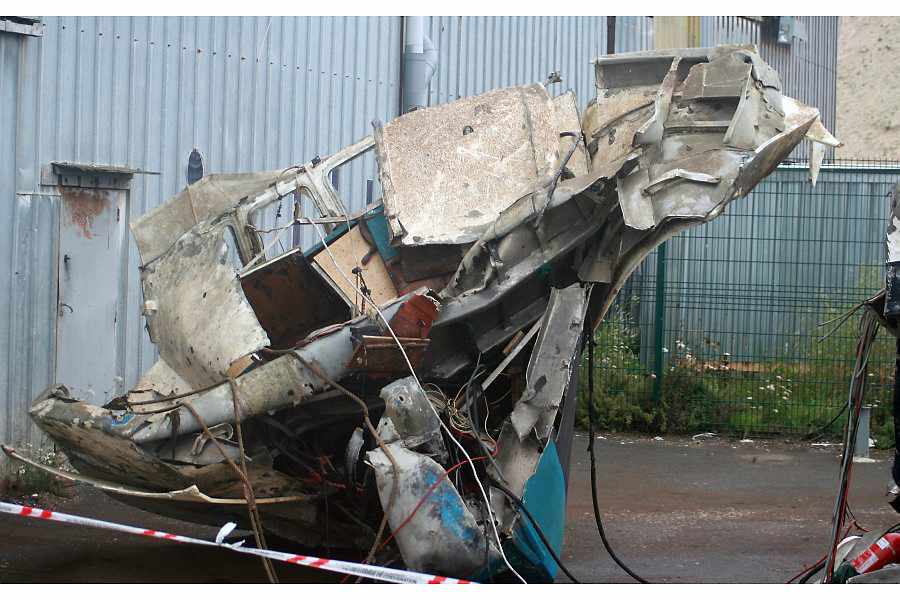 08.39.55 CAPTAIN: Moreover one of them was beautiful, very, very beautiful.

08.55.10 FIRST OFFICER: Jersey Coastguard, this is Condor Vitesse … we have collided with an object unknown, witnessed by a passenger to be a vessel, as to be a boat we are presently stopped. We cannot manoeuvre. Over. 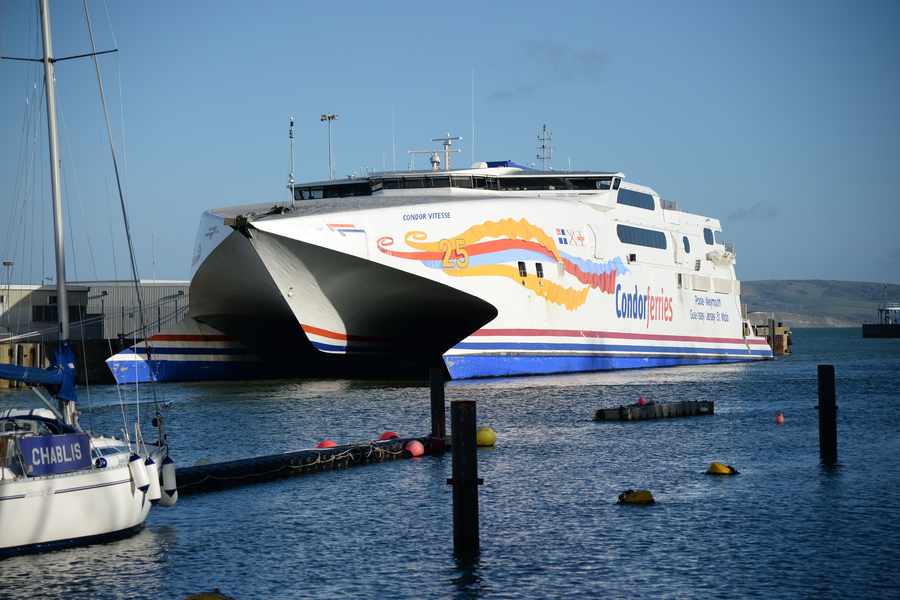 The ship that was involved in the crash was sold by Condor Ferries was sold to a Greek company, SeaJets, for an undisclosed sum, along with the Condor Express.

They will be replaced by the new Condor Liberation on the UK to Jersey route.