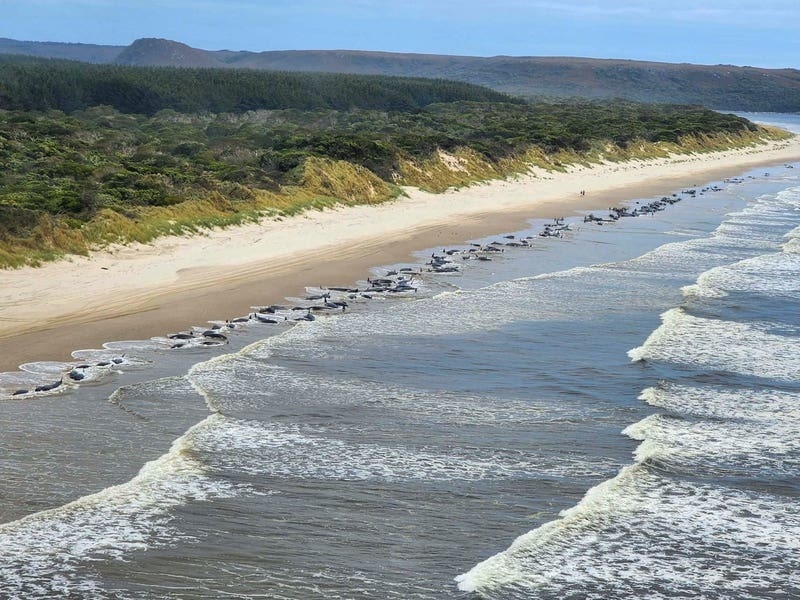 Two more whales have died in Australia after a handful that had been refloated a day earlier stranded themselves again.

About 200 pilot whales have now died from a group of about 230 that stranded themselves this week on the wild and remote west coast of Tasmania.

The whales were discovered on Wednesday in Macquarie Harbour.

About half were initially still alive but pounding surf killed many more.

Wildlife experts on Thursday managed to refloat 32 of the 35 that had survived.

He could not confirm an exact number but said it was fewer than 10.

He said one of the whales died and another needed to be euthanised.

“That’s unfortunate but that’s also one of the consequences of these types of events,” Mr Clark told reporters.

He said the priority was to try and refloat the three surviving whales that had remained stuck throughout the incident on a remote part of the beach, as well as any of the whales that stranded themselves again.

After that would come the process of removing and disposing of the carcasses, he said.

“That way they can be basically long-lined or tied together, ready for disposal at sea,” Mr Clark said.

The whales will likely be towed into deep waters far from the coast so they do not wash up on the shore.

Rescuers were hopeful they could reach the three remote stranded whales late on Friday but faced difficulties due to the location and tidal conditions, Mr Clark said.

More than 50 government staff and volunteers have been involved in the rescue efforts.

The creatures were found two years after the largest whale mass-stranding in Australia’s history was discovered in the same harbour.

About 470 long-finned pilot whales were found in 2020 stuck on sandbars.

After a weeklong effort, 111 of those whales were rescued but the rest died.

The entrance to the harbour is a notoriously shallow and dangerous channel known as Hell’s Gate.