Ukrainian unit digs in for Russian assault on eastern city 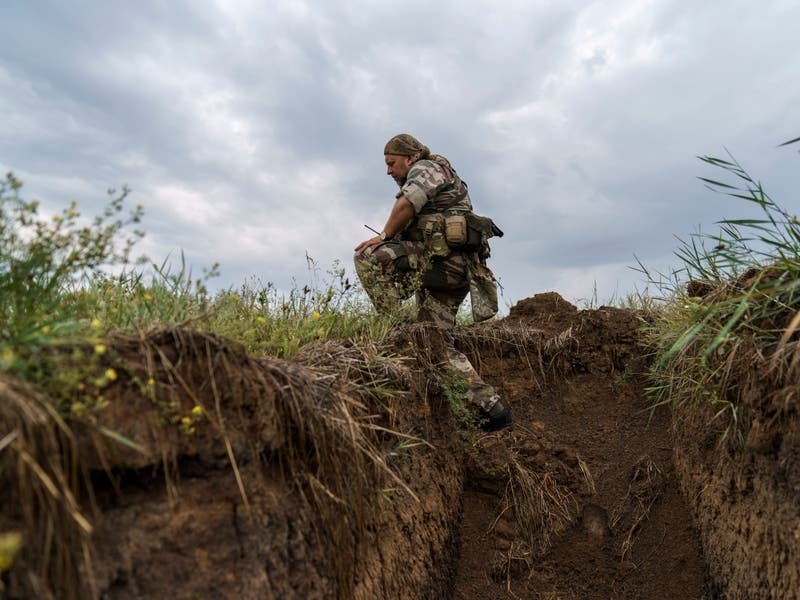 Ukrainian military personnel are fortifying their positions around the eastern city of Sloviansk in expectation of a fresh Russian attempt to seize the strategic point in the fiercely fought over Donetsk region.

As heavy ground fighting continues on the front line only miles to the east, south-east and north of Sloviansk, members of the Dnipro-1 Regiment are digging in after a week of relative calm.

The last Russian strike on the city occurred on July 30.

While the lull provided Sloviansk’s remaining residents with a reprieve after regular shellings between April and July, some unit members say it could be a prelude to renewed attacks.

Sloviansk is considered a strategic target in Moscow’s ambitions to seize all of Donetsk province, a largely Russian-speaking area in eastern Ukraine where Russian forces and pro-Moscow separatists control about 60% of the territory.

Donetsk and neighbouring Luhansk province, which Russia has almost entirely captured since Ukrainian forces withdrew in early July from the remaining cities under their control, together make up the industrial Donbas region.

The separatists have claimed the region as two independent republics since 2014, and Russian President Vladimir Putin recognised their sovereignty before he sent troops into Ukraine.

Seizing Sloviansk would put more of the region under Russian control, but it would also be a symbolic victory for Moscow.

The city was the first to be taken by the separatists during an outbreak of hostilities between Russia and Ukraine in 2014, though it was later brought back under Ukrainian control.

The Institute for the Study of War, a think tank based in Washington, said in an assessment that Russian forces had increasingly transferred personnel and equipment from the Donbas towards southern Ukraine to push back at a Ukrainian counteroffensive around the occupied port city of Kherson.

Those attempts to secure Kherson come “at the expense of (Russian) efforts to seize Sloviansk … which they appear to have abandoned”, the institute’s analysts said.

But Col Bereza said he thought muddy conditions after recent rainy weather in the region, not the abandonment of Sloviansk as a target, were responsible for the pause in Russian artillery strikes.

“In two or three days, when it dries out, they will proceed,” he said.

Only around 20,000 residents remain in Sloviansk, down from more than 100,000 before Russia’s invasion.

The city has been without gas or water for months, and residents are only able to manually pump drinking water from public wells.

At the outpost, Sgt Maj Shevtsov said the provision of heavy weapons from Ukraine’s western allies, including US-supplied multiple rocket launchers, had helped keep some Donbas cities such as Sloviansk relatively safe since their delivery in June.

But such weapons are only likely to have bought time for Ukrainian forces, he said, adding that the lack of strikes in the last week “worries me”.

In his experience, a lull means the Russians are preparing to go on the attack.

Another officer, Cmdr Ihor Krylchatenko, said he suspected the silence could be broken within days.

“We were warned that there could be an assault on the 7th or 8th” of August, he said.