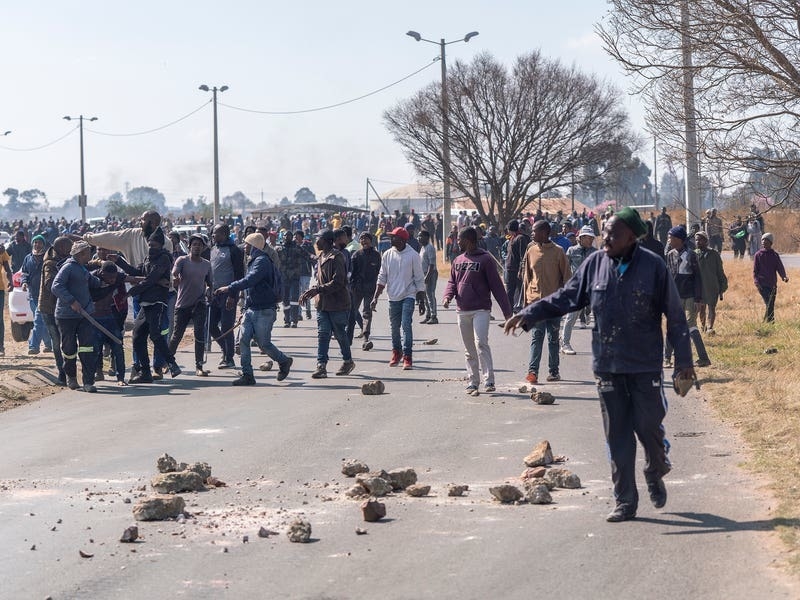 People in the South African city of Krugersdorp have beaten suspected illegal miners with sticks and set fire to their camps after the alleged gang rapes of eight women last week by more than 80 men.

Residents of Krugersdorp’s Kagiso township also barricaded roads with rocks and burning tyres during a protest against the presence of the miners.

They say they are frustrated with high levels of crime in the area that they blame on the illegal miners and the failure of police to deal with them.

Some suspected illegal miners were stripped of their clothes and whipped by residents. Residents chased others out of their camps and beat and kicked them before handing them over to police.

Officers responded by firing rubber bullets and stun grenades to disperse the protesters, who also clashed with police.

“We want support from the police because the illegal miners are terrorising us. We cannot simply walk around the neighbourhood at night because they rape us,” said Nhlanhla Felatsi, who was part of the protest.

“We recently had an incident where two female security officers were raped by the same people. The police are not protecting us.”

Eight women were allegedly raped last Thursday when a television crew filming a music video at a mine dump in the nearby township of West Village was attacked by heavily armed men, some suspected of being illegal miners.

The attack was a shocking incident, even for a country used to high levels of violent crime.

More than 80 men accused of being involved in the gang rapes appeared in court on Monday.

Illegal mining is rife in South Africa, with miners known as zama-zamas searching for gold at disused and abandoned mines in and around the Johannesburg region. Krugersdorp is a mining city on the western edges of Johannesburg.

Illegal mining gangs are considered dangerous by the police, are usually armed and are known to fight violent turf battles with rival groups.

The trade is believed to be dominated by immigrants who enter illegally from neighbouring countries Lesotho, Zimbabwe and Mozambique, and police said some of the men suspected of raping the eight women were foreign nationals.

“What upsets me is that we live as though we are not South Africans. How can someone from nowhere come and control us in our community?” said Kagiso resident Thoko Setlhabi.

“The people from Lesotho and Zimbabwe are coming into our houses and rape us. You must make sure you and your family are indoors by 6pm When will our children be allowed to be free?”

Police say they are still analysing DNA evidence to link some of the suspects to the rapes, but residents have criticised local officers for doing nothing, despite warnings that illegal miners were operating in the area as part of larger crime syndicates.

“Clearly something is wrong here. If somebody takes out gold here, where are they taking it? Our political leaders must come together and sort this out,” he added.