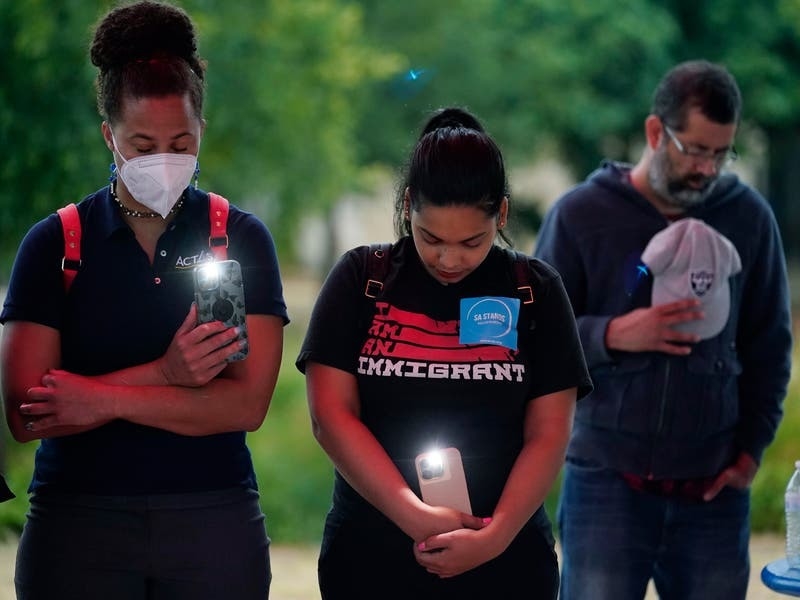 More than a day after the discovery of a lorry trailer in Texas where dozens of migrants who died were abandoned in the sweltering heat, few identities of the victims have been made public.

The lack of information illustrates the challenges authorities face in tracing people who cross borders clandestinely.

The number of dead rose to 53 on Wednesday after two more migrants died, according to the Bexar County Medical Examiner’s Office. Forty of the victims were male and 13 were female, it said.

Officials had potential identifications on 37 of the victims as of Wednesday morning, pending verification with authorities in other countries.

The bodies were discovered on Monday afternoon on the outskirts of San Antonio in what is believed to be the nation’s deadliest smuggling episode on the US/Mexico border.

More than a dozen people were taken to hospitals, including four children. Three people have been arrested.

The truck, which was registered in Alamo, Texas, but had fake plates and logos, was carrying 67 migrants, Francisco Garduno, chief of Mexico’s National Immigration Institute, said on Wednesday.

Among the dead were 27 people from Mexico, 14 from Honduras, seven from Guatemala and two from El Salvador, he said. One of the victims had no identification, Mr Garduno added.

The incident occurred at a time when huge numbers of migrants have been coming to the US, many of them taking perilous risks to cross swift-running rivers and canals and scorching desert landscapes. Migrants were stopped nearly 240,000 times in May, up by one-third from a year ago.

With little information about the victims, desperate families of migrants from Mexico and Central America sought word of their loved ones.

Guatemala’s foreign ministry said late on Tuesday that it had confirmed two hospitalised Guatemalans and was working to identify three possible Guatemalans among the dead.

Honduras’s foreign relations ministry said it was working to confirm the identities of four people who died in the truck and carried Honduran papers.

Eva Ferrufino, spokeswoman for Honduras’s foreign ministry, said her agency was working with the Honduras consulate in south Texas to match names and fingerprints and complete identifications.

The process is painstaking because among the challenges are fake or stolen documents.

Conditions vary widely, including how much water passengers get and whether they are allowed to carry mobile phones, he said.

Authorities think the truck discovered on Monday had mechanical problems when it was left next to a stretch of railway in an area of San Antonio surrounded by vehicle scrapyards that brush up against a busy road, Bexar County Judge Nelson Wolff said.

San Antonio has been a recurring scene of tragedy and desperation in recent years involving migrants in lorry trailers.

Ten migrants died in 2017 after being trapped inside a truck parked at a San Antonio Walmart. In 2003, the bodies of 19 migrants were found
in a sweltering truck southeast of the city. More than 50 migrants were found alive in a trailer in 2018, driven by a man who said he was to be paid 3,000 US dollars (£3,500) and was sentenced to more than five years in prison.