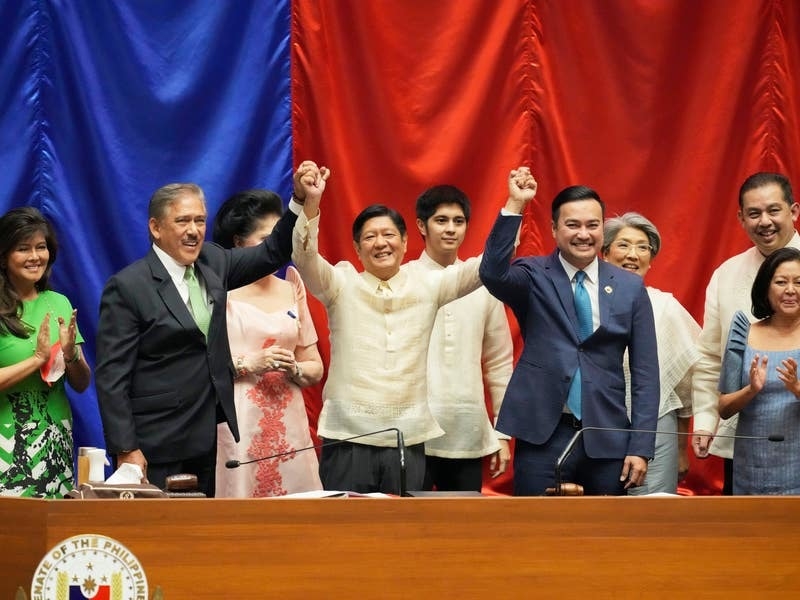 Ferdinand Marcos Jr has been proclaimed the next president of the Philippines by a joint session of Congress following a landslide election triumph 36 years after his dictator father was ousted in a pro-democracy uprising.

The Senate and House of Representatives also declared that his separately elected vice presidential running mate, Sara Duterte, had won by a wide margin.

She is the daughter of outgoing President Rodrigo Duterte, whose turbulent six-year term ends on June 30.

They will lead a nation battered by Covid-19 lockdowns, crushing poverty, gaping inequality, Muslim and communist insurgencies, crime and political divisions further inflamed by the election on May 9.

When they take office, Mr Marcos Jr and Ms Duterte will probably face demands to prosecute her father over thousands of killings of mostly poor suspects under his crackdown on illegal drugs. The deaths are currently under investigation by the International Criminal Court.

Mr Marcos Jr received more than 31 million votes and Ms Duterte more than 32 million out of more than 55 million votes cast in the election. It was the first majority presidential victory in the Asian democracy in decades.

During the campaign, they avoided controversial issues and focused on a call for national unity, although their fathers’ presidencies opened some of the most volatile divisions in the country’s history. Mr Marcos Jr appealed to be judged “not by my ancestors, but by my actions”.

“We’re very grateful for a second chance,” she told reporters before the proclamation.

Still, both have been hounded by their fathers’ reputations.

Riot police used water cannon and shields to prevent a few hundred activists from marching to Congress to oppose the proclamations, injuring at least 14 protesters, the left-wing group Bayan said. It said the forceful dispersal “could be a portent of things to come”.