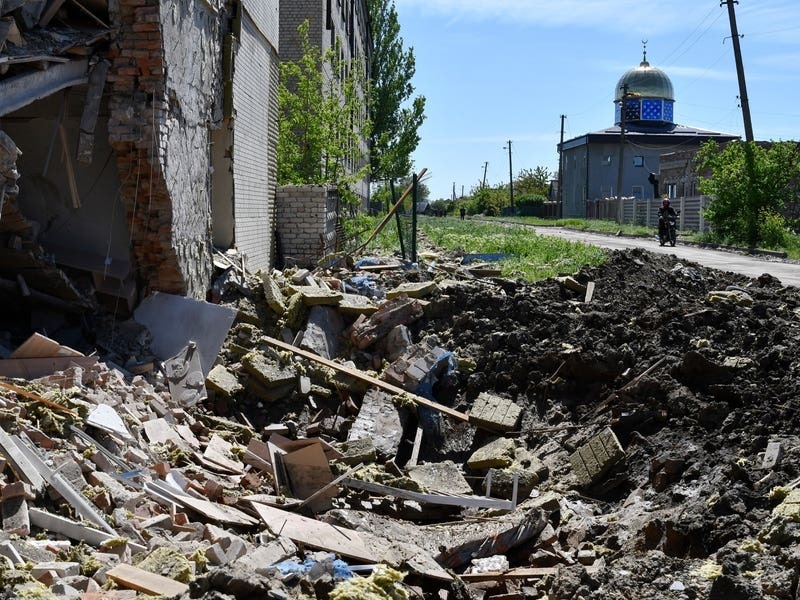 Russian forces pounded areas in Ukraine’s east on Thursday, including the last pocket of resistance in besieged Mariupol, as a war that is redrawing Europe’s security map pushed Russia’s neighbour Finland closer to joining Nato.

Finland’s president and prime minister said on Thursday that the Nordic country should apply “without delay” for membership in the Western alliance, founded in part to counter the Soviet Union.

The announcement means Finland is all but certain to apply to — and be accepted in — the military alliance whose members are committed to mutual defence, though the process could take months to complete. Neighbouring Sweden could do the same within days.

Russia’s Foreign Ministry warned the country would take retaliatory “military-technical” steps and said the move would “inflict a serious damage to the Russian-Finnish relations as well as stability and security in Northern Europe”.

Nato’s support of Ukraine — particularly by supplying weapons — has been critical to Kyiv’s surprising success in stymieing Russia’s invasion, which began on February 24.

Many observers thought Moscow’s larger and better-armed military would be hard to stop, but the Ukrainians have bogged Russian troops down and thwarted their goal of overrunning the capital.

Dmitry Medvedev, the deputy head of Russia’s Security Council chaired by President Vladimir Putin, said that “there is always a risk of such conflict turning into a full-scale nuclear war, a scenario that will be catastrophic for all”.

Already the war has unleashed staggering destruction, killed thousands and forced millions from their homes, while shattering Europe’s sense of post-Cold War stability.

In the wake of their failure to take Kyiv, Russian forces pulled back and regrouped — and switched their focus to Ukraine’s eastern Donbas, a region where Moscow-backed separatists have fought Ukrainian troops for eight years.

While Russia’s advance there has been slow, the general staff of Ukraine’s armed forces noted on Thursday that Moscow has achieved a “partial success”.

Western officials say Russia has gained ground and taken some villages but has not managed to seize any cities.

The Ukrainian military said that Russian forces were “storming” two villages near Bakhmut, but the source of the blasts was not immediately clear.

Russian advances in the east follow weeks of their stubborn efforts to push through Ukrainian defences in the Donbas. It is unclear how significant the Russian gains have been.

But any gains in the east may have come at expense of territory elsewhere. Britain’s Defence Ministry said Russia’s focus on the Donbas had left its remaining troops around the north-eastern city of Kharkiv vulnerable to counterattack from Ukrainian forces, which recaptured several towns and villages around the city.

Still, Russian rocket strikes on Thursday killed one person and wounded three in a suburb of Kharkiv, the regional governor said. Kharkiv, Ukraine’s second-largest city, has suffered heavy Russian bombardment during the war as Russia sought to encircle it.

Fighting across the east has driven thousands of residents from their homes.

Overnight airstrikes in Chernihiv killed three people, according to local media. The regional governor said the strikes on the town of Novhorod-Siverskyi damaged a boarding school, dormitory and administrative building.

And eight to 12 Russian missiles struck an oil refinery and other infrastructure in the central Ukrainian industrial hub of Kremenchuk on Thursday, the region’s acting governor, Dmytro Lunin, wrote in a Telegram post.

In early April, he said, the refinery, which had been the last fully functional one in Ukraine at the time, was knocked offline by an attack.

In the southern port of Mariupol, which has largely been reduced to smoking rubble with little food, water or medicine, or what the mayor called a “medieval ghetto”, Ukrainian fighters continued to hold out at the Azovstal steel plant, the last stronghold of resistance in the city.

Ukrainian Deputy Prime Minister Iryna Vereshchuk said negotiations were under way with Russia to win the release of 38 severely wounded Ukrainian defenders from the plant. She said Ukraine hoped to exchange them for 38 “significant” Russian prisoners of war.