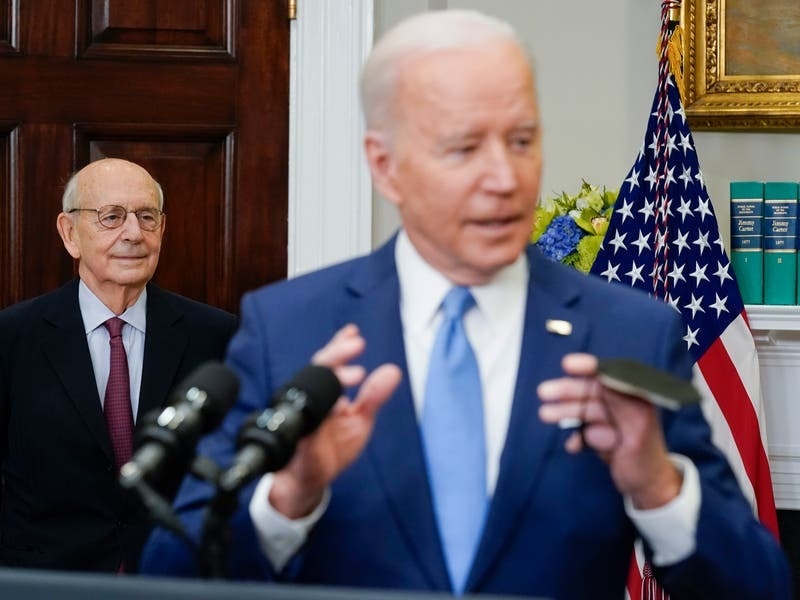 President Joe Biden has strongly affirmed that he will nominate the first black woman to the US Supreme Court, declaring such historic representation is “long overdue”.

He promised to announce his choice by the end of February.

In a White House ceremony marking a moment of national transition, Mr Biden praised retiring Justice Stephen Breyer, who will have spent nearly 28 years on the high court by the time he leaves at the end of the term, as “a model public servant at a time of great division in this country”.

“I’ve made no decision except one: The person I will nominate will be somebody of extraordinary qualifications, character and integrity,” he said.

“And that person will be the first black woman ever nominated to the United States Supreme Court. It is long overdue.”

Mr Biden’s choice will be historic on its face: No black woman has ever served on the high court. But the decision is also coming at a critical time of national reckoning over race and gender inequality.

However, the court’s 6-3 conservative majority is destined to remain intact.

Biden is using his choice to fulfil one of his early campaign promises, one that helped resurrect his moribund primary campaign and propel him to the White House in 2020.

And it gives him the chance to show black voters, who are increasingly frustrated with a president they helped to elect, that he is serious about their concerns, particularly with his voting rights legislation stalled in the Senate.

It also could help drive Democratic enthusiasm amid concerns about a midterm routing in congressional races.

He has installed five black women on federal appeals courts — where many high court justices come from — with three more nominations pending before the Senate. He has had more judges confirmed in a year than any other president since Ronald Reagan.

He promised a rigorous selection process. As part of it, Mr Biden’s team will review past writings, public remarks and decisions, learn the life stories of the candidates and interview them and people who know them.

Background checks will be updated and candidates may be asked about their health — it is after all a lifetime appointment.

The goal, according to people involved with past nominations, is to provide the president with the utmost confidence in the eventual pick’s judicial philosophy, fitness for the court and preparation for the high-stakes confirmation fight.

He has already met personally with at least one top nominee, Ketanji Brown Jackson, 51. She is a former Breyer clerk who worked at the US Sentencing Commission and has been a federal trial court judge since 2013 in the District of Columbia.

Ms Childs, a federal judge in South Carolina, has been nominated but not yet confirmed to serve on the US Court of Appeals for the District of Columbia Circuit.

She is a favourite of House Majority Whip Jim Clyburn, one of Mr Biden’s top congressional allies, who said she had “everything I think it takes to be a great justice”.

Ms Kruger, a graduate of Harvard and of Yale’s law school, was previously a Supreme Court clerk and has argued a dozen cases before the justices as a lawyer for the federal government.

Biden also personally interviewed a few other possible candidates during their recent appointments, including Eunice Lee and Candace Jackson-Akiwumi.

Both women have experience as criminal defence attorneys and could diversify the range of legal expertise on the high court, where many of the judges came from prosecutorial jobs or academia.