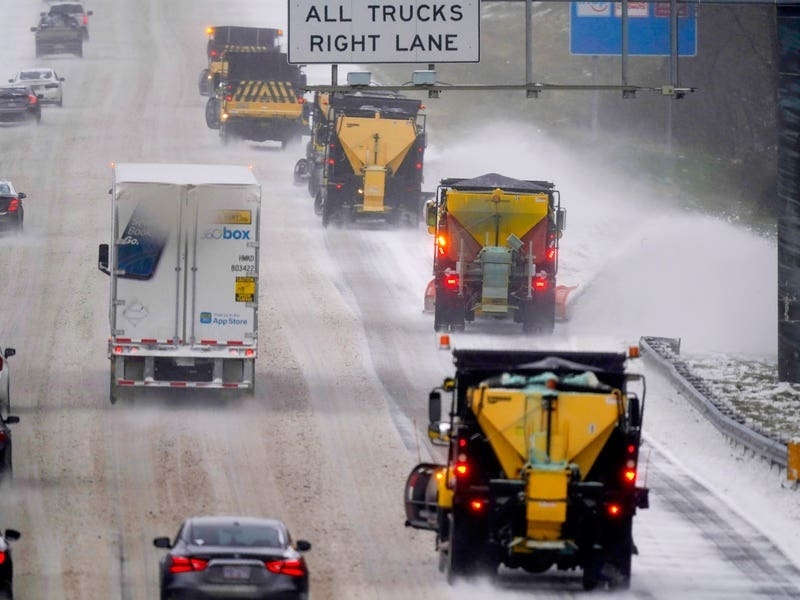 A winter storm combining high winds and ice was sweeping through parts of the south-east of the US, knocking out power, felling trees and fences and creating treacherous driving conditions.

Tens of thousands of customers were without power in Georgia, North Carolina, South Carolina and Florida. More than an inch of snow fell per hour in some parts of the Carolinas, Georgia, Tennessee and Virginia, according to the National Weather Service Storm Prediction Centre.

The storm was making air travel extremely difficult in some parts of the south of the country. The nation’s hardest-hit airport – Charlotte Douglas International – remained open around dawn on Sunday, the airport said in a weather briefing.

In Atlanta, where Delta Air Lines operates its main hub, more than 300 Sunday flights were cancelled.

Conditions were expected to continue to deteriorate later on Sunday, and possible ground stops were anticipated at airports in the Washington DC area, the Federal Aviation Administration said in its air traffic control plan for Sunday.

Parts of North Carolina were under a winter storm warning until Monday morning.

Frank Pereira, a meteorologist with the National Weather Service, said to expect a “significant ice storm across portions of the central Carolinas”, including the Charlotte metropolitan area.

More than 250,000 customers were without power by late morning on Sunday, according to poweroutage.us.

Georgia was especially hard-hit, with nearly 110,000 outages. South Carolina had nearly 90,000 customers without power. The remaining outages were in Florida, North Carolina and Tennessee.

In Tennessee, Kentucky and West Virginia, crews pre-treated roads, but officials still urged people to stay off them. The Tennessee Highway Patrol said in a tweet that some roads in East Tennessee were snow-covered and that police were working at the scenes of several accidents due to ice.

Weather forecasters said the north-east of the country could expect similar conditions.

The National Weather Service forecast winds of up to 60mph across Long Island and widespread coastal flooding there and in Connecticut by Monday morning.

In upstate New York, temperatures in the single digits were projected to rise into the 20s and bring heavy snow beginning Sunday night and lasting until Monday night.

Six inches (15cm) to 12 inches (30cm) of snow was expected in parts of east-central Ohio and western Pennsylvania from Sunday afternoon, resulting in slick and hazardous road conditions.

In Boston, where a cold emergency was declared on Saturday, wind chills remained below zero at -17C even as the region started the thaw.