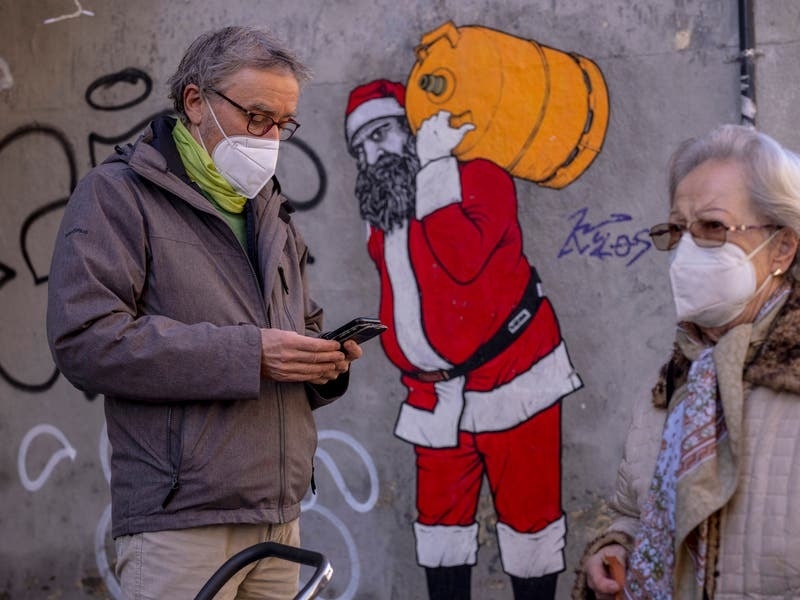 Italy, Spain and other European countries are re-instating or stiffening mask mandates as their hospitals struggle with mounting numbers of Covid-19 patients.

Other nations, like the Netherlands, are considering introducing masking rules.

In Italy’s case, the use of more protective FFP2 masks is also seen as a way to keep businesses and public services running.

The Italian government says vaccinated people who had contact with someone who tested positive for the coronavirus can avoid quarantine as long as they wear a FFP2 mask while in public for 10 days.

With Italy’s hospital ICUs rapidly filling with mostly unvaccinated Covid-19 patients, the government announced on Christmas Eve that FFP2 masks – which offer users more protection than cloth or surgical masks – must be worn on public transport, including planes, trains, ferries and subways.

This is on top of current rules which state passengers in Italy, as of this week, must be vaccinated or recently recovered from Covid-19.

FFP2s also must now be worn at theatres, cinemas and sports events, indoors or out, and cannot be removed even for their wearers to eat or drink.

Italy re-introduced the outdoor mask mandate, having never lifted its indoor mandate – even when infections sharply dropped in the summer.

“Of course, it is,” Mr Sanchez said. “It’s not me saying it. It’s science itself saying it, because (it’s) a virus that is contracted when one exhales.”

Portugal brought masks back at the end of November, after having largely dropped the requirement when it hit its goal of vaccinating 86% of the population.

Greece has also restored its outdoor mask mandate, while requiring an FFP2 or double surgical mask on public transport and in indoor public spaces.

Those places are currently closed under a lockdown, scheduled to end on Friday.

In France, the outdoor mask mandate was partially re-instated in December in many cities, including Paris. The age for children being required to start wearing masks in public places was lowered from 11 to six.

In Italy, with more than two million people currently positive for the virus in a nation of 60 million and workplace absences curtailing train and buses, the government also sees masks as a way to let society function more fully.

People with booster jabs or recent second vaccine doses can now avoid quarantine after coming into contact with an infected person if they wear an FFP2 mask for 10 days.

The government has ordered shops to make FFP masks available for 75 euro cents (62p). During the pandemic’s first year, FFP2s cost up to 10 euro (£8.35) – whenever they could be found.

Francis did appear to be wearing a FFP2 when he emerged from a music store near the Pantheon earlier this week, startling shoppers in Rome, before being driven back to the Vatican.

Nino Cartabellotta, president of the Bologna-based GIMBE foundation, which monitors health care in Italy, said the situation in Britain points to what can happen when measures like mask-wearing are not valued.

“The situation in the UK showed that use of vaccination alone wasn’t enough” to get ahead of the pandemic, he said, even though it was one of the first countries to begin vaccination.